At some point on the 2nd floor of the Evil Spirit Club labyrinth, you will be given the quest “Which Mascot Reigns Supreme” if you choose to show interest in a discussion during a cutscene (that’s what I assumed, at least).

This tutorial shows you
– where to find the buried item (also the source of the smell) to complete the quest.
– how to defeat the ‘Cute Baby’ FOE (the strategy I used).

“Locate the source of a certain smell in the Evil Spirit Club.”
Reward: Scapegoat and 2,500 EXP.

The first thing to do is go to the 2nd floor (2nd story) of the Evil Spirit Club labyrinth. Once you’re there, locate and go to the highlighted room in the screenshot of the labyrinth’s map below (red rectangle shows you the area to go to) :

Note: Remember to click the “N” icon if you’re having difficulty finding the highlighted area. 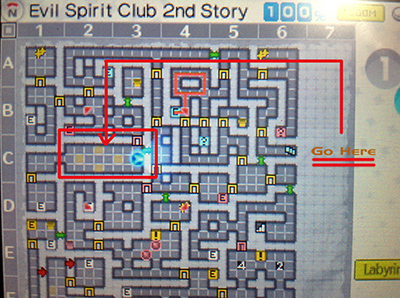 You do NOT have to defeat the FOE to find the buried item. I went through the trouble of defeating it though mostly because I thought I had to beat it (I actually thought the FOE’s smell was affecting Teddie from finding it under one of the lights). Once you enter the room, try to get the FOE off your tail and go to the block that my character’s symbol is pointing (the blue circle arrow). Press the “A” button by the wall and you should find the buried item. The FOE must be one block away from you. It isn’t difficult to shake it off your tail by walking around the lights.

How to beat the FOE

Your front row characters should all use electric element skills while Aigis protects them in the back using safeguard to take the hits. Healing Harp is a useful skill that restores a lot of HP and removes binds, which you’re going to need as well. Healing Harp is a skill that can be learned by Orpheus Telos, a Persona that is available to download for free from the eShop. It’s a low level Persona so perform a Persona scarfice after defeating some previous FOEs (you get high level Personas) to level it up. Keep boosting your characters’ attack and hit the FOE with electric attacks (physical electric attacks hit hard with the boost) and eventually it will fall. Shura Tensei + Zanshinken or Raimeizan is most effective against this FOE while the Healing Harp skill restores your sacrificed HP and removes paralysis while Safeguard protects you from dying.

Do you still need help?

Don’t forget that you can always ask for help about Persona Q in our SMT/Persona Q forum. All that you have to do is sign up for an account and create a new thread. Eventually someone should answer your question.