8-bit was once the only way to fly for home consoles, but now it’s an art style. We had ClaDun, Half-Minute Hero, and the Mega Man games on WiiWare. Witch & Hero, Circle Entertainment and F K Digital’s venture in this direction, was released more than half a year back but only got a demo on October 3, 2013.

The story goes that Medusa wreaks havoc around, a witch and hero are sent to put an end to her… and they fail miserably. The witch is turned to stone and the hero staggers out dragging her along. After that you go through a number of stages defending the stone witch on your way back to a rematch with Medusa. There are some grammatical errors in the storytelling (“A long long ago”) but the story is still cute and is told with a touch of humour as well. 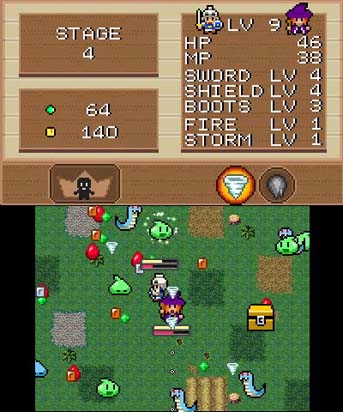 The gameplay is very simple. Despite having a sword and a shield, your hero won’t be attacking and defending with them. Instead he walks around and bumps – yes, bumps – into enemies that come in randomly to bump into the witch and drain her health until her statue crumbles. When you bump into an enemy, both you and the enemy take damage – this is inevitable, though you can reduce damage inflicted on you and increase damage inflicted on enemies by bumping into them from behind. Once your hero’s health hits zero, he faints and you have to wait for his health to recharge, which you can speed up by moving the Circle Pad around. After the game decides you’ve bumped around enough, a boss enemy appears (just a bigger version of regular enemies – they even have the same sprite) and once you bump them to death, the level ends.

Enemies drop money and experience points, and sometimes treasure chests you have to bump open (gosh, there’s a whole lotta bumping in this game, isn’t there?) to get more money, experience points, and crucial health items. Later on you can pick up monster blood and give it to the witch to revive her for a short time. The witch can’t move, but she can turn around using the L and R buttons and has two attacks – a straight fireball and an area-of-effect wind attack.

Upgrades can be bought at the in-game shop between stages, and that’s about it. The game is fun to play in short bursts, but repetitiveness is a drawback and due to the random pattern of enemies instead of proper waves the difficulty is rarely, if ever, balanced – levels can be very easy or maddeningly difficult, it’s just your luck which kind you get. 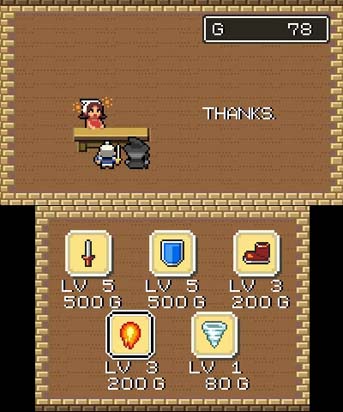 The visuals look very good – the retro art style is well done and the stages look pretty good, although the lack of proper boss sprites (the developers, as mentioned before, went with oversized regular enemy sprites)  seems half-hearted. The music is also 8-bit fare, but it’s nice to listen to especially compared to the awfully loud and piercing music of the 3D Classics games.

In the end, Witch & Hero is cute and humorous (pressing the up key five times in the shop reveals an amusing Easter egg from the developers) but repetitiveness hurts its chances of ranking next to other great 8-bit titles like ClaDun. It’s such a simple game, in fact, that if I didn’t know it was a 3DS game I wouldn’t have doubted for a second it would have been playable on an NES. Whether you like it or not really depends on whether you enjoy the kind of titles Circle Entertainment publishes to begin with. You should try the demo before considering buying the game.