From the creators of Destructamundo and Bit Trip Runner, Choice Provisions, formerly known as Gaijin Games presents Woah Dave. A strange but subtly, charming and addictive game; everything about it just oozes nostalgia. From the retro, cover art to the punishing difficulty, Woah Dave! is chock full of throwbacks to classic games, like Mario Bros. 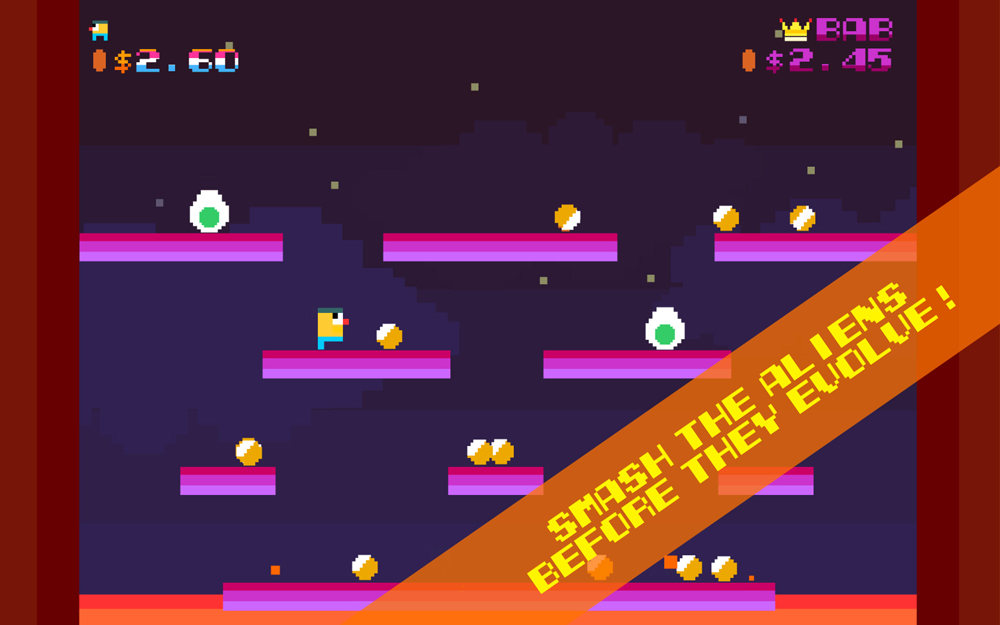 You play as Dave, a man with big dreams who just hasn’t realized it yet. Dave needs to kill the alien invaders and stay alive avoiding the lava. The plot doesn’t get more complicated than that, staying true to the games it draws inspiration from, such as Mario Bros or Space Invaders.

The graphics and the soundtrack are reminiscent of the Atari 2600 games, or the 8-bit style. Although the 8-bit style has lost its charm and impact factor due to overuse, the graphics actually complement the simple gameplay of Woah Dave! The music also adjusts to the level of action, ramping up in energy when the screen gets chaotic.

Never have I felt so much like a masochist, playing another round just to break even with the previous high score. A word of caution Woah Dave! is not for the weak hearted or weak willed. This game is every bit as challenging as the classics, but completely fair. The controls are tight and responsive. The objective of this game is to collect as many pennies as you can. How does one obtain pennies? By smashing the aliens with their own eggs or blowing them up with a skull bomb, while avoiding contact with aliens. And yes the action is crazy as it sounds. 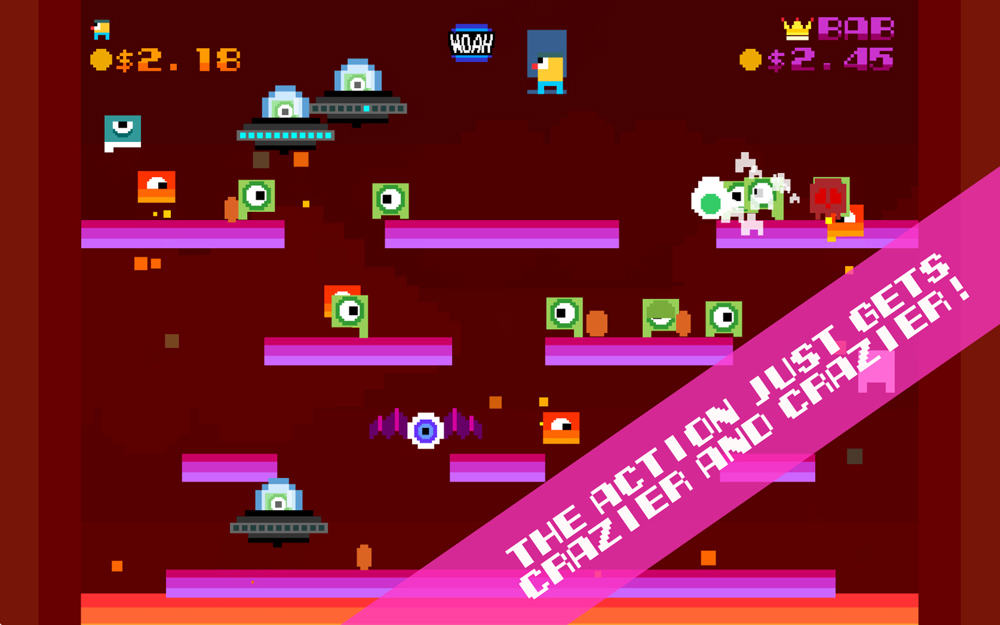 The game starts slowly, easing you in to the game, by dropping eggs and skulls from the sky. Oh and did I mention that even your primary weapon is a ticking time bomb? Many have suffered deaths from forgetting to release the skull before it blew up, but I was kicking myself for it because the skulls blink blue before blowing up. The game is tough but fair, because the deaths never felt cheap; the deaths were always due to human error. It made me want to continue for another round to reach that coveted score. And pennies don’t come by easily. In fact there’s a risk versus reward system that causes the player to cultivate stronger aliens to later kill for more pennies. The aliens hatch from eggs, and then, when they make it to the every growing lava pool at the bottom of the screen, they grow stronger, and faster, rinse and repeat until it is a flying eyeball. One might always run the risk of filling the up the stage full of aliens. But fear not, for when a smorgasbord of aliens are on your screen, you can rely on the good old “Woah (cough*pow*cough) Block” to get rid of everything on the screen.

However, the game lacks any  more depth than the previous mechanic. It’s hard to stay interested after the unlocking bonkers difficulty. And there’s only one music track which adds to making the game staler after every round. The game is made to be played in quick bursts and it wears out quickly if you consume too much in one sitting. It does have an achievement system to prolong the replay value but the achievements lack any incentive to complete them. Comparing the 3DS version to different systems such as the PC and IOS, it is the lesser version, even with the 3D feature. It costs about $5 on the 3DS, while the IOS version is only $2. On steam Woah Dave! is $4.49, with an added multiplayer feature.

The game itself was a fun, nostalgic  but a short-lived experience. For high scoring, masochistic maniacs looking for a retro challenge this game is for you for others not so much. Should you buy the 3DS version? If you’re looking for portability the IOS version has you covered at a cheaper price, but at the loss of better controls. If you’re going to play this comfortably on a chair or sofa, steam has you covered with multiplayer. With the price as of now, I would wait for the 3DS version’s price to drop if you only had one option.