The combat system in Xenoblade Chronicles 2 has many different elements, some are easy and others a bit difficult to comprehend at first. Once you’ve mastered these, that tough Boss will be a piece of cake! 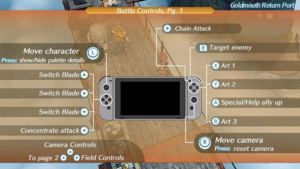 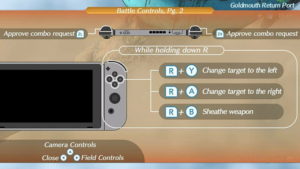 You can start the battle in many ways. You can attack the enemy first and gain the advantage but you can also get targeted by enemies themselves and lose the advantage. To start combat from a distance, use the bottom button on the D-Pad to toss a rock at the enemy and deal one damage point. This is helpful because you can use it to lure enemies away if they are in groups. Some enemies can use a move to summon more enemies to them, so sometimes luring them away doesn’t work but it can give you time.

When you begin combat, your character will attack automatically if they are not moving and have an enemy targeted. The character will not attack if you are moving, using specials, or if you are under certain ailments. Auto-Attacks will start to fill your Arts meter and once full you can unleash an Art. Your Art meter is located at the bottom right, the red line surrounding the diamond represents how full the meter is and once full the button will be lighted up.

Driver Arts are special attacks you can use once you’ve done enough Auto-Attacks. Every Blade and Character combination grants different Arts. Some Arts heal, damage, hinder the enemy, etc. Every Blade comes with four Arts, only three can be equipped at a time and can be changed at any time. When you use Arts when the final attack of your Auto-Attack string hits, your Art will have greater effect. This is called an Attack Cancel. 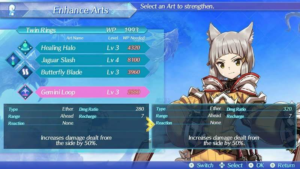 Some Arts will inflict status effects to the enemy. If you use these effects in the right order, you will do major damage. The order is Break, Topple, Launch, and Smash. When Break is activated, a timer will be displayed on the side of the enemy’s health bar that slowly counts down the time you have left to continue the Driver Combo before it stops. The Topple and Launch timers count down faster than the first so make sure you have all the Arts ready. You do not need all four to use the combos. Using Break and Topple might give you enough time to finish off the enemy. 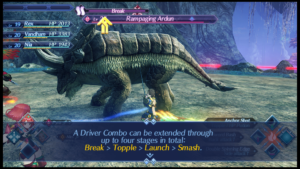 Much like the relation between Auto-Attacks and Arts, Specials work in the same way. Specials are very powerful attacks that deal great elemental damage. Your Special Gauge is located near the Arts and is the button on the far right that is assigned to the A-Button. When you use your Arts, the Special Gauge will fill. There is a window of time after an Auto-Attack that you can use your Arts to fill the Gauge faster. You will know when you got it by a blue ring that appears. There are Four Specials you can use for any Blade. You will know what Special you are on by the roman numeral symbol. You can fill up the Gauge all the way to three by using Arts.

To get to level four, you must position your character near their Blade and it will start to fill. It will stop filling if you do any Arts but will resume after. If the Affinity Line between you and the Blade is severed during the charge, it will cancel and you will have to charge it up again. The Affinity Line is the blue line connecting you and the Blade. When the Line turns Golden/Yellow, that means your Affinity is max. When it is max, your movement speed and Arts will charge faster. When you activate a Special, you will need to do some button presses. It is best to remember these so you can get Excellent ratings on them and higher damage output. 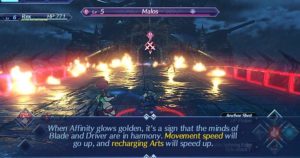 Blade Combos are combos comprised of Special Attacks. When you use one special, a list of elemental attacks will appear at the top right. To continue the combo, you must use a Special of the directed Element and the Special must be one tier higher. For example, Fire Special Lv.1 into Water Special Lv.2 into Ice Special Lv3. The first Special will start the combo, the second will pick the path the combo will go, and the third will be the Final Attack. Your other Party members will switch to a Blade with the needed Element if they have them equipped automatically. To use their Special attacks, use the ZL and ZR buttons. At the end of a Blade combo, an orb will circle around the enemy and seal it’s potential to perform certain types of attacks. The potential you seal is determined by whatever move you finished the combo off with, while the element of the last move determines which orb appears. You can continue to surround the enemy with additional orbs to seal more abilities and increase your Chain Attack potential. Trying to make an orb of the same element as one already in play will just result in the old one getting replaced. 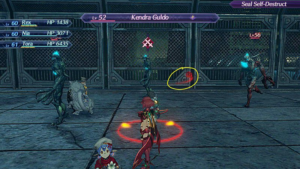 If you time a Driver Combo so that the timer for Launch is active when you finish a Blade Combo, you will perform a Fusion Combo. A Fusion Combo’s finishing Special deals tons of damage. 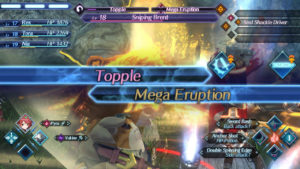 Once all three bars of the Party Gauge are full, you can activate a Chain Attack by pressing the + button. Once activated, every Driver in the party gets a chance to unleash a Special with any of their equipped Blades. This is where you burst down any Elemental Orbs you set up with Blade Combos. If you manage to burst Elemental Orbs, you earn extra Chain Attack rounds and can even unleash mad amounts of damage with a Full Burst if you destroy enough orbs. In order to burst an Elemental Orb, you simply need to attack it with a Special of the opposite element during a Chain Attack. Opposing elements are: 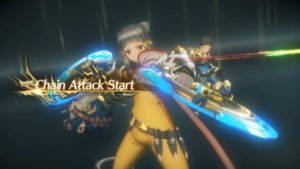 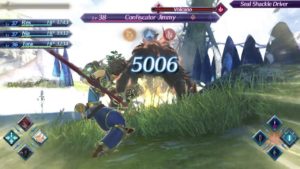