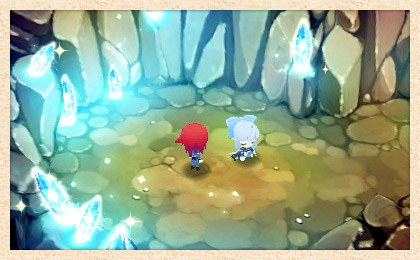 XSEED Games has just launched their official website for the long-awaited strategy RPG adventure, Lord of Magna: Maiden Heaven, which you can visit here. On top of that, XSEED Games has also revealed several gameplay details regarding the game’s battle system, which is accompanied by a short tutorial video. Here are the newly released details, from the words of XSEED themselves:

Featuring aspects of tactical role-playing games, Lord of Magna: Maiden Heaven boasts a unique strategic battle system that encourages players to take careful aim with their attacks in order to “bowl” over as many enemies as possible with a single strike. Four main elements dominate this battle system, each with their own strengths and weaknesses. These are Flame, Frost, Heaven, and Earth. Alongside them stands a neutral non-element, Void, which has no strengths or weaknesses at all.

Players will form their battle party from up to four of the game’s eight characters, with each character possessing a particular elemental affinity as well as a character-specific weapon with its own unique attack range. Players must decide for themselves whom to include in their party for the ultimate combination of balance and power!

Here are a few brief details regarding each character’s elemental affinity, weapon, and attack range:

·Luchs [Void affinity] – The game’s main protagonist and the only character with a default Void affinity, Luchs’ attack has an extremely small range, targeting only enemies directly in front of him. Luchs has very limited attack power, and is thus best suited to support skills.

·Beatrix [Frost affinity] – Beatrix attacks from a distance with her bow gun, “Selbstgemachte Armbrust,” striking all enemies within a small circular area.

·Gabriele [Heaven affinity] – The only character with a default Heaven affinity, Gabriele’s attacks strike all enemies in a small, circular area directly in front of her. Her weapon is a chest called “Pandora’s Box,” and its contents can be seen by using her various skills.

Players can prepare their favorite party members for any battle situation by equipping them with special items called “Skill Chips” to change their default elemental affinities. As enemies also possess these specific elemental affinities, Skill Chips can be particularly useful for knocking down powerful foes!

Each of the seven heroines have four unlockable special skills consisting of physical attacks, healing skills, and support skills which can be obtained by having Luchs spend time with them during downtime from battle. These “HEART Events,” part of Lord of Magna: Maiden Heaven’s relationship-building system, are all about getting to know the heroines personally. The more time that Luchs spends with a heroine, the greater the number of special skills that will be unlocked for both characters.

In order to use special skills, the player must build “Tension” during battle, which can be earned by defeating enemies. Using these special skills can also build Tension when enemies are defeated with them, and if a character can defeat 10 or more enemies in one turn, that character will earn a second turn with the option to use an additional special skill if enough Tension has been accrued.

To help in the understanding of these gameplay details, XSEED Games has shared a brand new Lord of Magna: Maiden Heaven tutorial video based on the game’s battle system (available at youtu.be/uD5rNf4wHUo), as well as screenshots and character art. Visit the official website for additional details about the game, its battle system, and more at www.lordofmagna.com.

Are you hype yet? I know I am. Lord of Magna: Maiden Heaven releases June 2nd in North America, and June 4th in Europe, so mark your calendars and get ready to battle (and win some Maidens’ hearts..you know, to unlock skills and stuff..totally the only reason).