AIMING TO BE THE BEST! 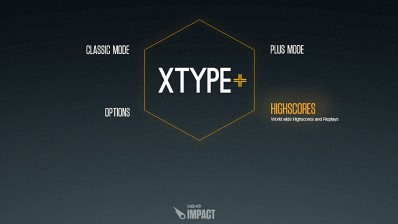 GAMEPLAY:
XType Plus  is a Shoot’em’Up arcade game, where in short terms, you need to get the best score possible beating as many bosses as you can. In this case, the quantity of bosses is unlimited, where the game generates larger and tougher enemies with each level beaten.

Every boss contains different small parts that can be destroyed, making the ship smaller, where you can also decrease its fire power destroying the weapon parts of it. There’s also a core part, and it must be your main objective because when you destroy it, the whole boss is destroyed (also more small parts present when the core part is destroyed means more bonus points for you).

XType Plus features two different modes: the first one is the Classic Mode where you will only have three lives to fight against the bosses. In this mode, the most important thing to do is evade their attacks meanwhile you attack them back, so you will need to take your time. You will be fired with two different elements: the classic bullets which you need to evade, and rockets which can be destroyed.

The second mode is the Plus Mode. In this mode, instead of having lives, it offers a Time Attack mode. For every boss that you beat, you will get some time back, and if you die, instead of losing a live you will lose precious time. Acting faster is important, so I recommend to train with the Classic mode before trying this one. 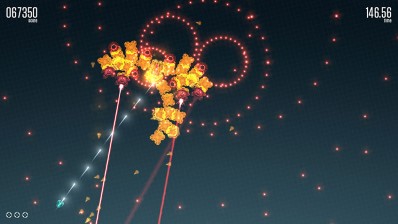 There are more differences between those modes, in the Plus Mode the ship moves faster, this is due the higher difficulty from the bosses: the rockets will follow you instead and they’re able to shoot lasers. You will also have three bombs that can be activated with the shoulder button, and their effect is quite strong: they destroy all the enemy fire on the screen and also it will give you a temporal shield. Those are literally a life saver, so try to keep them until a big emergency.

The game duration is quite long considering there’s no limit of bosses in both modes. The game also features a lot of replay value because it presents an online leadboard where the best highscore of all the players is saved, still, there’s another use for it: you can replay any of those highscores, and being able to watch how other players played means you can learn their strategies. It’s such a great feature.

The controls are easy and solid: you move the ship with the L stick (you will need to evade) and shoot with the R stick (where you need to attack) and like I said, the shoulder button for the bombs in the Plus Mode. 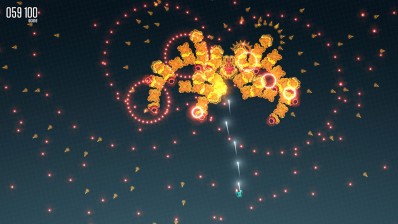 GRAPHICS AND SOUND:
XType Plus features a minimalist style that looks really good and even with the screen filled with bullets, it works really smooth offering a great experience.

The game features one song that’s good, but with the time you will get eventually tired of it, still you’re able to mute the music and listen to your own music and keep playing. The sound effects used for the game are great although there’s not a big variation but still features an excellent quality.

PRESENTATION:
The presentation of the game is excellent, there’s a simple manual, online leadboards, a lot of replay value, different controller support, a literally infinite game duration, a user-friendly interface and a solid presentation in general.

The only bad thing I can find for the game is the lack of an Off-TV mode (where you will need the TV to play), where is such a waste of the Wii U Gamepad capabilities.

CONCLUSION:
It’s simple, challenging, cheap and great, featuring a lot of replay value being a must have for the lovers of the genre. It also shows how much the Nintendo Web Framework is capable of. Still, the game needs the off-TV mode feature, a missing opportunity.