Indie developer Yeti Boombox are working on ‘ManderZ Quest’ (working title) an upcoming release for the Wii U eShop that is styled as a Game Boy Color game. 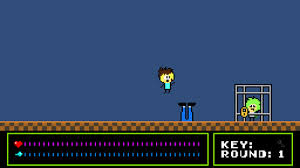 The official description is given below:

Due to a glitch in a game’s code, ManderZ and her friends have found themselves trapped inside a “GamerGirl Color” handheld gaming console.

It’s up to you to save them! Playing as ManderZ, you’ll work your way through 8 crazy, classic-style levels, defeating enemies, bosses, and ultimately fixing the glitch that sent them to this strange game world.

The game is a tribute to the Game Boy Color, and has the following features:

There is no release date, but the game will be a Wii U exclusive.