When Yooka-Laylee was released in 2017, it received a lukewarm reception. The game failed to surpass the expectations set too high for its own good. Playtonic Games treasured the criticism and released another title of this newborn IP: Yooka-Laylee and the Impossible Lair.

The resulting game abandons its roots of a 3D platformer in favor of a 2D one with action-adventure tones.

The game follows our dynamic duo in their attempt to stop Capital B’s new nefarious plan. He wants to take over the Royal Stingdom using a mind-controlling device, the Hive Mind. The only way to defeat him is to gather the scattered Royal Beettalion and storm his hideout, the Impossible Lair. 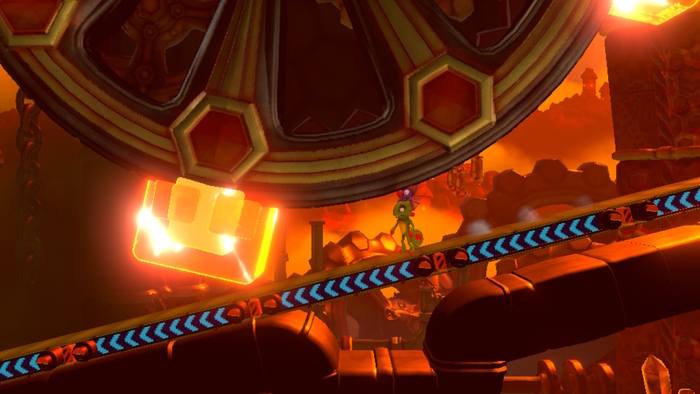 The plot is simple and unpretending. It follows classical platformers’ canons, with a cast of funny and wacky characters. Players will meet Trowzer, the greedy snake who is interested more in maximizing his earnings than saving the world, a talking vending machine and so on. While it isn’t engaging per se, it’s full of humor and that alone can catch the player’s attention. With puny names for characters and stages and equally bizarre situations, a good chuckle is guaranteed.

The game can be divided into two different sections: the overworld and the platforming levels. Each is different in design and gameplay, but they’re integrated well together and players won’t suffer from the transition between them.

Each level follows a standard 2D platformer’s side-view. Yooka and Laylee will proceed checkpoint to checkpoint till they reach the imprisoned bee. Freeing it will end the current stage.

While traversing a stage, the player can collect Quills, the game’s currency. There are also Ghost Quills that activate timed challenges and reward the player with even more Quills. In each level, five T.W.I.T coins can be found. They are either stashed in boxes, located in areas difficult to reach or are given by Ghost Quills.

Level design is top-notch, with enough variety to keep every stage interesting. The difficulty curve is adjusted so well that the player won’t almost notice the steady increment of complexity.

Controls are pretty straightforward: Yooka can jump, roll to attack and grab objects with his tongue, while together with Laylee he can glide during a jump. The rolling attack is probably the most important move at Yooka’s disposal: using the momentum built from rolling he can jump higher and for a longer distance.

Overall, the controls are responsive and fluid. Whenever the player messes something up, they won’t feel cheated on. A misjudged jump or a failed attack is, sadly, their own fault. 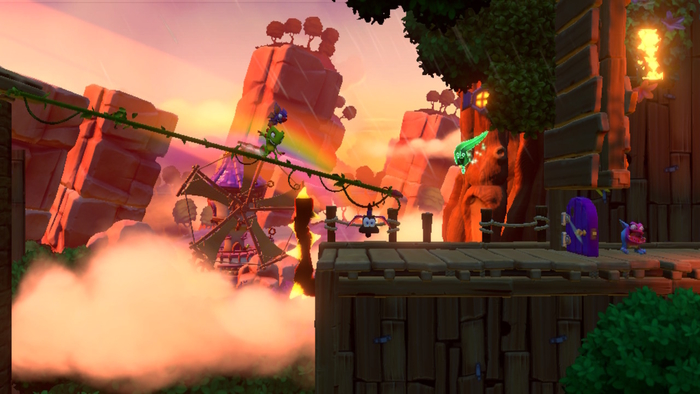 There is no life meter: every time an enemy damages Yooka, Laylee will get scared and fly away, if Yooka receives another hit he faints and gameplay restarts from the nearest checkpoint. It’s possible to retrieve Laylee by either catching her again or ringing special bells found in the level. Without Laylee, Yooka cannot twirl in the air anymore, this obviously hinders player’s survival chances since they are more vulnerable and jumps have a limited range. This is an interesting system, it reminds players of the platformers of old, where a couple of hits often meant death, without ramping up the difficulty with artificial systems like limited lives.

There’s also a special function available for the less experienced players. If the player dies too much during a certain section of a level, the corresponding checkpoint will flash yellow and it will teleport Yooka directly to the next one at the press of X. Obviously, doing this for every level would make the whole game pointless, but it’s incredibly useful if the player wants to revisit a specific section and find a missed treasure.

The overworld has a top-down view and a gameplay structure that follows traditional action-adventure titles. Here, Yooka moves are rather limited and his jump height is reduced significantly. At first, it’s a bit problematic to estimate which surfaces Yooka can jump on and ones that are too high for him to reach, luckily the player can get accustomed to it pretty quickly. To proceed, the player has to resolve really simple environmental puzzles, like moving boxes, finding keys and so on. 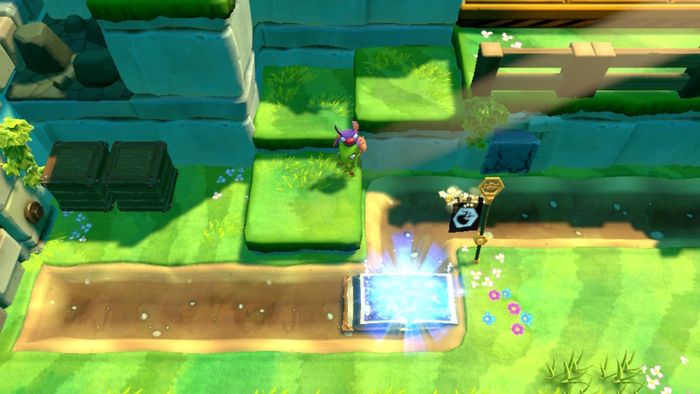 It’s possible to alter the world thanks to Pagies. They are sheets of paper found on the map that offer a single-screen challenge level when interacted with. Their scope is to defeat all enemies on the screen, but they resemble more of a puzzle game than a normal platformer. To succeed, the player has master Yooka’s moves, enemies’ patterns, and environmental traps’ functioning. They aren’t difficult, but they offer an interesting diversion to the usual flow of gameplay.

Through the overworld, Yooka can find various Tomes that grant access to platforming levels. The most interesting feature is the ability to affect the levels’ layout from the overworld. For example, if the player change the course of a river and its waters hit the Tome, the level will be flooded. Each level has two possible layouts: a normal one and an altered state.

This interesting system creates a connection between the overworld and the stages that surpasses the simple idea of a playable map. It’s fun to experiment with the environment and discover how to alter a level.

At first, the part of the map Yooka can reach is limited, since he will meet Paywalls. True to their names, these are blockades that the stingy Trowzer will lift off only if given T.W.I.T coins. The presence of these obstacles is probably a deterrent against players who skip their way through levels. However, this also breaks the game’s flow. Finding the sufficient number of coins might force the player to visit the already completed levels again, even multiple times in accordance of their platforming skills.

Moreover, due to a not so well explained paywall, it’s possible to entirely skip the last three stages. This can be a pretty frustrating situation, in which the player would miss a total of six bees without understanding why.

The overworld could almost be a whole independent game itself since it’s packed to the brim of optional things to do. Other than finding Tomes, Yooka can find Tonics, special beverages that alter gameplay and visual style of levels. Each Tonic is accompanied by a Quill multiplier, that is positive if its effect hinders playability, while it’s negative if it eases it. For example, a Tonic that eliminates every checkpoint in a single level will double the earned Quills, while one that increases invincibility frames reduces them of around 30%. Others are useless on a gameplay standpoint since they simply add colored filters to stages.

The search for Tonics is an engaging activity. Some Tonics can simply be collected on the overworld, while others are earned by solving riddles. The developers were incredibly creative in locating them like a Tonic found underwater that has an unconventional way to be obtained. This feature alone gives the player that adventuring feeling suitable for a full-fledged Adventure game.

If the game so far appears like a fun platformer, that gives a nod even to less platforming-savvy players, the Impossible Lair throws it all out of a window.

First of all, it’s important to say that the final level can be accessed anytime. The player can engage it just after the prologue. The main difference in tackling it in disparate moments is the number of hits Yooka can sustain. The chameleon can be hit an additional time for each member of the Royal Beettalion liberated.

Therefore, if the player manages to get all the 48 bees, they’ll have a better time than someone that has, let’s say, only 10 of them. 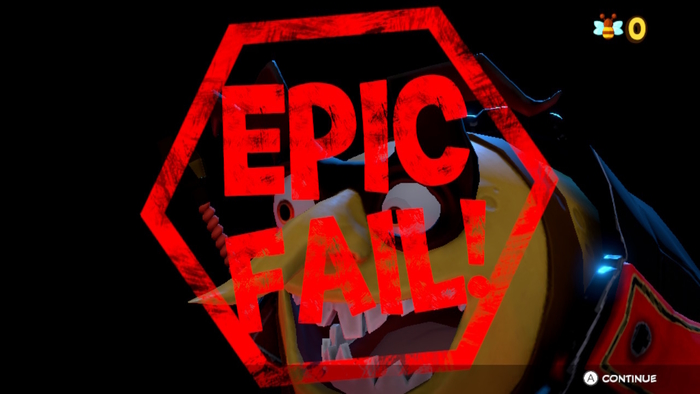 And they’ll need every single bee. The Impossible Lair is an enormous, 20-minute-long stage without checkpoints or any other type of help.
It contains any trap, foe or specific design element encountered during previous levels, all with a notable increase in difficulty.
It’s a process of trial and error that requires pattern memorization and a good mastery of controls.

It’s a bit frustrating that in case of a ‘game over’ the player is forced to the beginning of the level since this doesn’t help to practice the most difficult last sections. At least, it can’t be said that the developers used a baiting and misleading title.

Like its predecessor, the game maintains a cartoony character design, that is reminiscent of early 3D platformers, but all rendered in glorious high definition. Graphics are colorful and, while simple in their design, accurate, with fancy light effects and dynamic shadows. They are, to simply put it, a joy to the eyes. 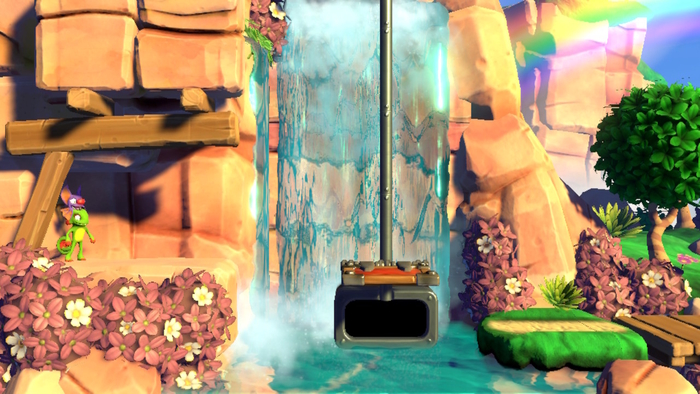 The soundtrack is stellar, too. Every level has a catchy track accompanying it and it’s not rare to stop playing to hear it. Music really embodies the spirit of every level. For example, a stage full of trees and vegetation has an energetic tune that transforms into a melancholic melody when it passes to its altered state, a frozen forest.

The game has a total of 40 levels, not counting the Impossible Lair. They can be completed in under 10 hours. Playtime can be lengthened up to around 15 hours thanks to the numerous Tonics to find in the overworld. The final level can add a few hours alone since it requires multiple attempts to get through it.

There would be a secret ending, but that requires a flawless run through the Impossible Lair, a feat that not many players would have the patience to achieve.

Yooka-Laylee and the Impossible Lair is an incredibly good game. Everything, from the level design to the soundtrack, shows how much passion and experience Playtonic Games put into it.

The high difficulty of the Impossible Lair could turn many people off. However, it would be a shame to pass on this game solely due to this. What is a single level in comparison to 40 of pure platforming goodness?

If it’s true that it’s the journey to count and not the destination, well, this is such a great, fun journey.