Yoshi’s New Island takes place shortly after the events in Super Mario World 2: Yoshi’s Island and a bit before the events of Yoshi’s Island DS, making it a pre-sequel of sorts. The story begins with one of the Storks carrying Baby Mario and Baby Luigi to their parents, and that’s when the generic-Mario story thing happens.

When you go to meet your parents you’ll be greeted with strangers claiming to have nothing to do with you, so it would seem the Stork messed things up. On your way to your real parents house, you’ll be greeted by Kamek, the main protagonist of the Yoshi’s Island franchise, whom apparently likes kidnapping babies. Of course, if you’ve played the other entries in the series you know how it goes; Kamek takes Baby Luigi away, Baby Mario manages to find his way onto an island full of Yoshi’s (in this case, Egg Island), and then goes on a quest to defeat Baby Bowser with the help of the Yoshi’s, and rescue his brother. 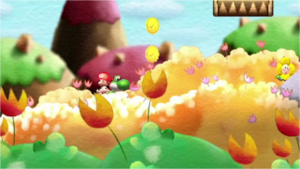 It’s sad how predictable Mario games have become; depending on what series it is, the story is usually identical, take or leave a few power-ups, and the Yoshi’s Island series is no different. I know Nintendo generally makes up for a sloppy story by having innovative gameplay, but this time they just didn’t do it.

Within the game you’ll find a total of 64 levels spanning 8 worlds. This isn’t an extraordinary amount or anything, but it’ll take you a few hours to beat at least. Each level has 20 red coins to collect, 5 of those smiley flowers I’m sure you’re all familiar with, and the stars, which also act as your health.

Each level is extremely linear, which truly is a shame. There’s no mystery; sure, there are secret ledges you can get to, but they aren’t hidden very well. For younger audiences, it’s great. But for those that played the original and want more of a challenge, you’d probably be better off just playing the original.

Yoshi’s New Island‘s clay-based art style looks nothing more than messy. Nintendo had something incredibly charming with the original Yoshi’s Island‘s crayon-based art style, and it’s a shame that they decided to go a different route this time. The game does support stereoscopic 3D for those of you wondering, which does help bring the levels to life a bit. 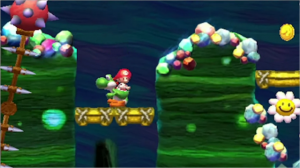 The soundtrack is average at best. The whistling in most of the soundtrack in particular is quite annoying; headache inducing if you play the game at full volume.

As I mentioned before, each level has 20 red coins, 5 flowers, and stars to collect. Collecting these will give a bit more of a challenge – the stars in particular – but it’s still minimal. They aren’t extremely hard to get and it won’t take you long to get everything in every level. Yoshi’s New Island is a game you’re going to beat once and be done with it. Fair warning.

Yoshi’s New Island certainly isn’t a game you need to own, nor is it a game you should buy at full price – waiting for a sale or price cut is a must. There isn’t much of a challenge for experienced players, the graphics are messy and the soundtrack can be annoying at times. If you’re looking for a challenge, just replay the original. Otherwise Yoshi’s New Island is great for children, it should also keep them busy for a while.