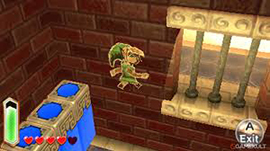 In an interview with Cnet, Eiji Aonuma revealed that the main inspiration to transform Link into paint and make him walk on walls comes from the episode – The Legend of Zelda: Ocarina of Time. It was while recalling the fight against Ganon, passing from picture frame to picture frame, that the producer had the idea to adapt this concept to the hero of the series. This new capability will allow Link to extend the exploration of dungeons and solve more puzzles. The Legend of Zelda: A Link to the Past 2 reassures the world of the famous game released on the SNES and will be released on 3DS at the end of the year.