I want to play a game. What’s the first thing you think about after hearing that line? Saw (movie), right? Zero Escape: Virtue’s Last Reward is no different, however, instead of getting brutally murdered by traps, Spike Chunsoft decided to continue with the lethal injection route. That does not mean people do not get brutally murdered during the gameplay, of course.

Players kick the game off trapped inside an elevator while being confused as to where they are and why they’re there with the objective of seeking a way out. That’s where the puzzle aspect plays a role with a lot of dialogue scenes here and there. The dialogues are far from boring and will definitely make you giggle every now and again. In addition, the game features a prisoner’s dilemma named the Ambidex Game where characters choose to either ally or betray other characters they are up against, which affects the direction the game goes in. 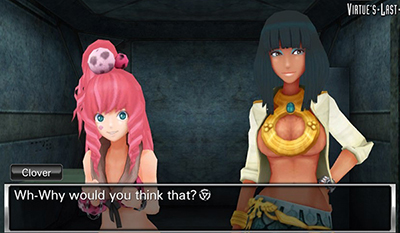 Virtue’s Last Reward does a good job with each character’s personality. Choosing ally or betray for the Ambidex Game is always a difficult choice. Their reactions to what you choose are always something to look forward to as well. The 3D models are impressive (especially when 3D is enabled when you align your eyes properly towards the 3DS’s screen) and are animated which is a nice touch instead of boring still images all the time.

A new feature that was introduced in Virtue’s Last Reward that was not present in ‘Nine Hours, Nine Persons, Nine Doors’ is the flowchart. Thanks to the implementation of the flowchart in the game, players can jump to any point that they have played. This helps you tremendously after getting a dead end screen instead of playing over from the beginning. Be warned, some endings in the game gives off the impression that the game ends and will continue in a sequel (assuming you reach your first ending because some endings say, “to be continued”), however, it’s really only 1 of the 24 possible endings in the game. 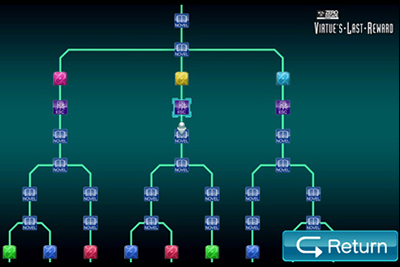 That isn’t the only feature that helps you save time. The game also includes a ‘skip’ feature that really just fast-forwards dialogue scenes. It came in handy while I played the game because there are certain parts of the game that repeat itself in different routes although they are low in number. Another feature that was useful during my playthrough was the Memo (also known as Brain Memory). It’s a two page drawing memo-pad where you can write down notes or draw symbols using your 3DS’s stylus to help you through your journey.

After the game’s release, there was a deal-breaking bug that corrupted your save file if you happened to save your game in the wrong area. Unfortunately, the bug was not fixed, however, it was patched by disabling save functionality in the two areas that the bug affected :

It isn’t the best solution but it will at least prevent players from losing their save data, thankfully.

Another con is a typo that I discovered while playing (although it’s not that big of a deal) : 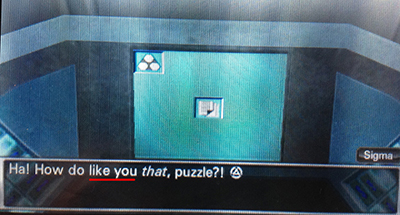 The screenshot above shows a computer screen of a puzzle that has been solved.

While the ‘search and find’ puzzles can be a bit challenging, the ones that require you to perform actions to get a certain result are even more enjoyable. There aren’t puzzles such as those in every room, however, there is a decent amount of them present in the game. 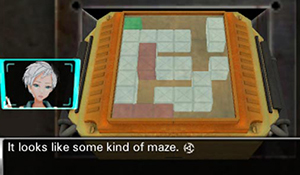 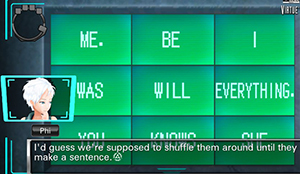 The controls aren’t difficult to learn – you’re basically looking for objects on the screen to touch using your stylus, and selecting items from the top-left corner of your screen is a no-brainer. If you’re not a fan of touching a small arrow-looking icon to zoom out, the developers made it easier to zoom out by sliding your stylus down from a point on the screen.

The soundtrack isn’t bad either. Music played during the gameplay isn’t loud nor annoying. Instead, it is relaxing to hear while solving the difficult puzzles that the game has to offer. A sound is heard when discovering an item by touching it which is also pleasant to the ears.

Virtue’s Last Reward has a solid storyline, interesting characters who will keep you entertained with excellent voice acting that matches each character’s personality well, challenging and fun puzzles that put your brain to work, 24 different endings for replay value (every ending is a piece of the puzzle) and gorgeous graphics, especially when viewing the gameplay in 3D.

The game is worth every single penny that you will spend on a copy of it.