Rail shooters were all the rage once, but they’ve definitely dipped in popularity since then. Even House of the Dead, arguably the most popular rail shooter franchise, hasn’t had a new title in years (the home console release of House of the Dead 4 doesn’t count as a new title). The Nintendo DS family, with its touch screens, seemed ideal for rail shooters to move to but apart from Touch the Dead which had some respectable ideas but was ruined by terrible execution, there haven’t been many efforts in this direction and Zombie Blaster is probably the first, and only, first person rail shooter the DSiWare library has. From the same developer and publisher of Astro, Zombie Blaster is a rail shooter that could easily have sat back on nostalgic laurels to sell but instead is an excellent game which adds elements of its own.

The story is hilariously cliche, an unintentional homage to light gun games that couldn’t help being campy: Duke and Jean, the two playable characters, are driving wherever they’re driving with their car almost out of gas, so they stop at a gas station where the worker is a sleeping zombie that is somewhat annoyed when Duke wakes him up. All of a sudden zombies come out of everywhere and their car does some unbelievable stunts for them to escape and then crash into a cemetery. There is conveniently a gun in the glove box for them to take and then you shoot zombies. The cutscenes don’t have the smoothest animation, but they are cutscenes – and how many DSiWare games have cutscenes that don’t recycle in-game animations? 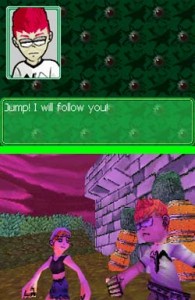 The only department of this game that I had any major complaints with was the presentation, which isn’t awful but could have been much better. The game’s icon in the Home menu is a simple yellow crosshair, and the menus are very basic. The extras are just 3D models for you to look at, which doesn’t really make them extras at all. There are errors in grammar and spelling mistakes in the dialogue, the text equivalent of the corny voice acting pretty much all rail shooters had.

The visuals aren’t the smoothest, but all the models are 3D and the backgrounds have a nice amount of detail. You can’t reduce zombies to a headless, armless mass of flesh on two legs like you could in House of the Dead 2. In fact you can’t shoot off their body parts at all (aw!) but considering the hardware limitations it’s still an achievement. Hey, people thought Metal Gear Solid’s visuals were amazing when it came out! The gunshot effects could have been better though – they’re just coloured dots. The music is catchy and one of the best things about the game. The gunfire effects are more pew-pew than boom-boom, but I found it to fit in with the game’s more child-friendly than most rail-shooters’ setting. The sound effects, especially the reload ones, are excellent and I’d sometimes reload when I didn’t need to just because it sounded good.

The gameplay is brilliant and incredibly fun for rail shooter fans. You tap the screen to shoot at zombies, use the left or right buttons to cycle weapons and the down button to reload. This control scheme is also mirrored on the face buttons to better suit people who are left-handed. A new element not common to rail shooters in this game is that you can choose between three weapons – the pistol, which has infinite ammo; the shotgun, which is great for close ranges; and the machine gun, which is great for taking out bosses or a mowing down many enemies on the same screen. Just like other rail shooters, you move around automatically and the movement stops when you’re near zombies you can shoot, although you can shoot them while moving as well to make things easier.

The HUD is displayed on the upper screen. Your character has a health bar which drains with zombies’ attacks and when it hits zero you lose a life (represented by green traffic lights for some reason). You stay at the same point without pausing for even a second though, so losing a life doesn’t break up the action – so basically, you have five life bars instead of four lives. Bosses come about every once in a while and are stronger than regular enemies – you also get to see their remaining health on the yellow life bar beneath your own.

Another great feature is that the game allows cooperative multiplayer between two players (not having a friend with a DSi or 3DS, I wasn’t able to try it out – but it’s good for people with DSi or 3DS-playing friends). 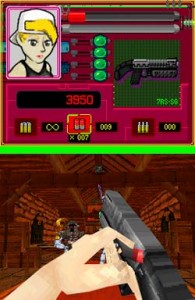 Zombie Blaster’s generic title and rough presentation may put some people off; it’s not at the level of perfection that House of the Dead 2 was and there’s definitely room for improvement, but its incredibly fun gameplay means that its flaws won’t hinder the game enough to be noticeable. If you’re a nostalgic rail shooter fan then you’d be doing yourself a disservice by skipping this one.