Brought to you by Spanish developer EnjoyUp Games, Zombie Skape is a DSiWare game that was apparently timed for people fearing the zombie apocalypse to have played it by December 21, 2012; it was a second effort for them to bring this loosely defined genre of game in the DSiWare department, after the unplayable Crazy Hunter, which received such stinging criticism that anyone would have thought they’d have taken it to heart and definitely not made a reskin of it and slapped it onto the eShop and the DSi Store just three months later. But sadly, that’s exactly what Zombie Skape is – a reskin of Crazy Hunter.

You play as Ethan, who’s skating in the park one night because he dreams of being as good a skater as his skating hero – not Tony Hawk, but some Johnny Eagle. Yeah, I never heard of him either. But anyway, all of a sudden, zombies start staggering down the road, the roads are on fire and the same girl over and over again is sitting down on the street waiting for Ethan to rescue her. It’s a basic story, made simply because it would be annoying just to say the zombie apocalypse started because the zombies were getting bored. You probably won’t give the story a second thought, and you’re not supposed to in this genre of game. A side note: the text in the game is translated very poorly. The grammar is atrocious. But anyway, on to the actual game.

You move continuously forward on the screens, avoiding the hordes of zombies that move towards you and if you collide with them, you lose a health point. The action is split into the two screens, with the upper screen showing the road ahead and you move about on the lower screen. A mass of zombie hands are on the bottom of the lower screen which reach out, grab you and make you lose a health point if you slow down too much, so you can’t cheat and safely avoid the zombies coming down the road towards you by slowing down and steering. This is one of the few things in this game that both made sense and actually worked, and made you really play the game, so the developers deserve a point for that. You also press B to ollie (you can change your direction mid-ollie off walls, which is slightly cool) and Y to brake.

Girls (all the same recycled sprite) are scattered throughout the extremely short levels for you to rescue. These girls basically count as your ‘score’ at the end of the game, determining your position on the high score table. To be honest, there is a ninety-nine percent chance that you’ll jump to number one on the high score table on your first playthrough. Also, after rescuing a certain number of girls depending on the difficulty level, you gain an extra life. The number of girls to be rescued for each extra life increases each time.

Here there’s a huge flaw in the game to be pointed out. When you die and lose a life, your overall score doesn’t change. This means it’s possible for you to rescue four girls, get an extra life, die, rescue four girls again to get an extra life, repeat, until you have an end score that could go anywhere up to Avogadro’s number. It’s only a possibility though – I can’t see anyone actually bothering to do it given how bitingly painful this game is to play.

The visuals are a mix of 2D and a little 2D-styled 3D. The environmental hazards (fire, overheated gutters – I’m not making this up – and purple patches that I don’t know, could be zombie slime or something) are awful-looking and often cut into the walls on the sides of the levels. To create the illusion of height when you ollie, there are some streaky white lines that follow your player through the air – they look all right. The zombies are grainy and composed of only two frames – one with their right leg forward and one with their left to make them look like they’re walking.

The sound comprises tinny music that’s not altogether unpleasant to listen to, but it’s the same for every level. That and the title screen music are the only music in the game. The other sounds are the continuous rolling of your skateboard and soft-voiced girls saying ‘OK’, which also describes what the skating sound is like. But the sounds I want to get started on most are the hilarious zombie noises. Apparently these hungry-for-brains creatures are eternal-sleep-walking, because the zombie sounds are all snoring and snorting, exactly the kind of sounds an annoying sleeper makes when they’re in dream land. Well, I suppose that since it’s late at night in this game, they’re too sleepy to say ‘brains…’ and groan.

But it’s in the controls department the game suffers most. The steering is so sluggish that if you don’t start pushing left or right the moment zombies appear at the top of the upper screen, you will inevitably collide with them and lose a health point. By the time you’re done pushing up to reach the top of the screen, the next batch of zombies is so close it doesn’t matter anyway. The game is more playable than Crazy Hunter, that’s for sure, but the controls are still very, very unresponsive. 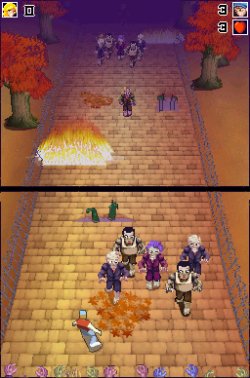 All this, you must realize, is pretty bad for a game that’s a reskin to begin with. But the length of the game puts the lid on. The game has eight levels, each of which take a minute at most to go through. This means that once you get used to the awful controls, you can finish the game and end up at the top of the high score table in less than ten minutes. This ridiculously short length is not helped even by the three difficulty levels, since even on Hard the only thing that’s made more challenging is that you have to rescue more girls than on Easy or Normal to get an extra life. I played through it thrice just to make sure that it really was that short. Zombie Skape is probably the shortest game ever barring the Flash-based as-a-joke efforts called ‘Shortest Game Ever’ one finds online; and its replay value is pretty much zero.

In the end, Zombie Skape struggles to justify its price tag and by extension, its existence, even though it costs only $2 – the minimum price for a third party game on the eShop or the DSiWare store. The sluggish controls and insulting length make sure of that.The most forgiving gamer wouldn’t think of Zombie Skape as even a mediocre game; it’s just that bad. The fact that Zombie Skape is not shown or listed on EnjoyUp’s official website shows that they’re just as keen to forget it as we are. If you really want to put that $2 to good use in gaming, spend it at an arcade or something.