Ah, Zombies, who doesn’t love them? Classic, undead, rotting, reanimated corpses shambling along their way becoming famous pop culture icons of the last five years. “Zombies in Wonderland DX” is a port of the Wiiware version to the 3DS, with controls changed to fit the 3DS and upgrade with 3D effects.

Presentation
The plot is eerily similar to the DS game Red Riding Hood’s BBQ game (Even down to the male lead, Momotaro). It was a shooting game from a top down perspective. Looked something like this

The graphics is decent and clean, but nothing too impressive. The user interface is clunkly at best with menu icons not blending well. Music is customized to each character, but with only one track for each, it gets dull. The cutscenes are reminiscent of the comic book style, where still images are moving instead of 3D models moving around. The characters are in the Japanese manga style, so they look as if they had just jumped out from an anime or manga series. The plot follows characters from fairy tales such as Snow White or Momotaro, a mix of western and eastern fairy tales, hence the name Zombies in Wonderland. Zombies have invaded Wonderland with strange smelling dwarves, the characters must find out what happened to Wonderland. 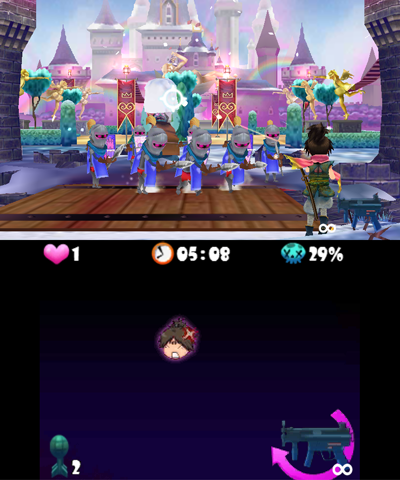 Gameplay
This game is hard, not the good Dark Souls kind of hard where you continue trying, but frustratingly hard. Perhaps it is as hard as surviving in the Zombie Apocalypse, because to complete story mode, you need to beat the entire character arc with two hit points. Sure there are health pickups but do not expect them to drop like blood and guts as you would expect in a zombie apocalypse. The game is a mix of point and shoot and gun arcade games. More specifically, you move on a horizontal axis while you aim at the screen with the touchscreen or with the ABXY buttons. The touchscreen controls take inspiration from Kid Icarus except, there is no moving front and back just left and right. You can pick from three weapons and change on the fly. First is the sub-machine gun, the weakest but has unlimited ammo, then the heavy machine gun and flamethrower both with limited ammo. There are ammo pickups, but the most common one was a rocket/grenade, which is used to take out a horde of zombies at once. 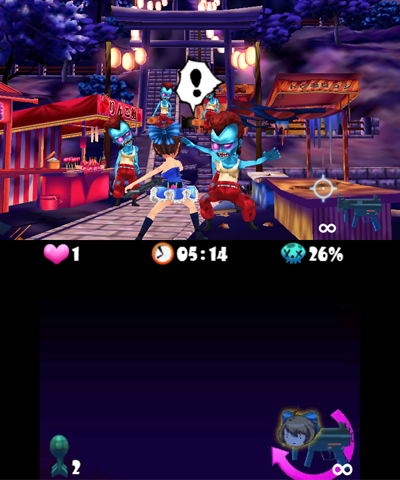 For the first few waves, it isn’t that difficult, but towards the end of the stage, the game takes a massive difficulty hike and throws zombies at you from every direction. After the 5th level you’ll be begging for health pickups, because not even boss fights restore your hit points.
For the zombies themselves they are in the anime, manga art style, strangely spewing cartoon hearts when they are defeated. There is variation to the zombies, which helps prevent the game getting dry. For example, large sumo zombies, ninja zombies, farmer zombies, there is at least one new zombie type suited to a new level. 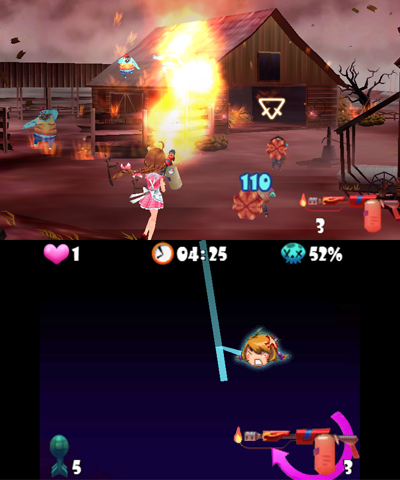 The game does have performances issues, when multiple zombies show up, or the destructible environment’s animation is played. Strangely, whenever the dodge mechanic is used the character seems as if it lost a couple of frames.

Conclusion
In conclusion, I couldn’t enjoy Zombies in Wonderland DX. I wish I could have, because the 3DS lacks the shooter genre, perhaps this is why. On the Wii, it was lauded as a good game, but on the 3DS the overall clunkiness and the unforgiving difficulty kills the potential of what could have been. I give it a
60/100