The early nineties were a great time to be alive if you were a fan of brawlers, and the two most popular series – Final Fight and Streets of Rage – were great at getting the arcade-goer to push more quarters into a cabinet like an out-of-control bulimic reaching into a second KFC bucket. These two franchises also formed the beat ’em up side of the Sega-versus-Nintendo rivalry: Streets of Rage did Genesis fans proud while Final Fight gave SNES gamers something to crow about.
More than twenty years later, M2 has ported Streets of Rage 2 – considered by many fans to be the best of the series – to the 3DS, even though they initially felt that it was impossible, and they’ve clearly put a lot of heart in it. Not only is it an exemplary port job, but the game itself has aged well.

The story is simple, and eh, who cared in that sepia-toned age? The Syndicate are the bad guys; the good guys Axel, Blaze, Max and Skate have to rescue their friend Adam (who was playable in the first game) from the Syndicate, and you get to beat up an assortment of foes comprising leathery punks, hopping robots, muscly oversized weirdos and this one dude who looks like a cross between Blanka and Wolverine. It’s eight stages of beat ’em up bliss. 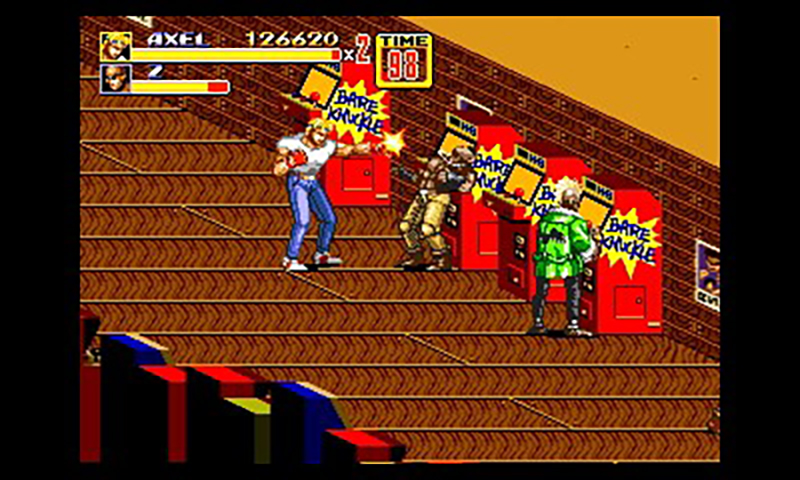 Using the default control scheme, you attack and pick up items with B, perform your character’s special attack with Y (this drains a bit of your health, so it’s best to use only in an emergency), press A to jump and move with the Circle Pad or directional buttons. Walk into enemies to grab them for throws. The R button has the same function as pressing A and B together: for throwing weapons and as an attack input.

Some environmental objects can be broken to reveal items to be picked up, such as food to recover health, money bags to raise your score and weapons – knives, swords and pipes. The pipe is the most fun out of these and its sound effect sounds very painful.

M2 has added a couple of ‘super-easy’ modes to the 3D version of this game: ‘Casual Mode’ lets you kill off any enemy, even a boss, simply by knocking them down; ‘Fists of Death Mode,’ which you unlock after beating the game once, takes it a step further by not even necessitating a knockdown – any old punch will do. These are good for a laugh, but not really enjoyable for playing the game through. If you’re having a hard time of the original mode, adjusting the game’s difficulty (which ranges from ‘Very Easy’ to ‘Mania’) is a better way to enjoy the game without turning it into a one-hit chore. On the other hand, the new Rage Relay mode is an excellent addition. It lets you play as a new character each time you lose a life; you can also set the order for their appearance.

The game’s visuals still look good with their tiny bits of detail providing some charm (like those Bare Knuckle arcade cabinets in one stage – Bare Knuckle is Streets of Rage’s Japanese title), and the 3D effect is superb. You can choose between making the 3D effect ‘fall in’ or ‘pop out,’ whichever suits you better. The newfound 3D depth touches up the graphics excellently. You can also select the ‘Classic’ screen mode, which makes it look like you’re playing the game on an old TV or arcade machine. 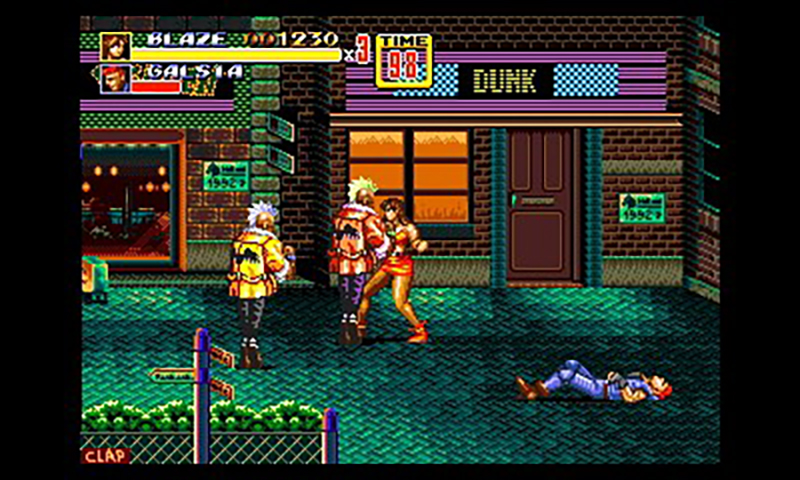 Yuzo Koshiro’s hardcore techno soundtrack for the game is instantly familiar and complements the gameplay and visuals splendidly. The first track, ‘Go Straight,’ is one of the most memorable pieces of gaming music of the Genesis era and hearing it again was quite a delight.

Streets of Rage 2 is the quintessential beat ’em up: simple, fun and the kind of game you can play through many times without getting sick of it. Its 3D rendition is pretty much the best version. Some fun extras include being able to choose between the international and Japanese version of the game (the latter is titled Bare Knuckle II), a new credits sequence packed with giggles and local multiplayer if both players own the game. For brawler fans it warrants an instant purchase, and any gamer looking into remastered versions of older games should check this one out.