Pokemon fans, get ready. Today, Nintendo revealed a new Direct at its official website – a Pokemon Direct. You can either look at the video or read the text contents below to find out what happened at this Pokemon Direct.

The first thing that was mentioned during today’s Pokemon Direct was the Player Search System (PSS). The PSS allows Pokemon X/Y gamers to battle and trade with anyone who owns the game from around the world, over a Wi-Fi connection, of course.

Pokemon Bank is a downloadable software (paid) for the Nintendo 3DS that allows Pokemon X/Y players to store their Pokemon in the cloud. If you do not have enough space in the regular game to store Pokemon, the Pokemon Bank will come in handy for only $5 per year.

Note: There is a limit of 3,000 Pokemon that can be stored in the Pokemon Bank.

It turns out that Pokemon X and Pokemon Y trainers will receive one of the new 6th gen starter Pokemon from a friend, while you will be given the option to pick one of the first gen starters from Professor Augustine Sycamore. 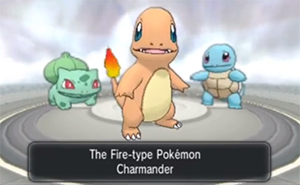 To take advantage of mega evolution, you will be required to use a mega ring (Pokemon trainer wears this) while the Pokemon is holding a mega stone. To see more mega evolution forms in Pokemon X and Pokemon Y, please read this.