Getting flavourful food ingredients from monster-infested fields is a tough job, but someone has to do it – if that ‘someone’ is the protagonist of Adventure Bar Story, an adventure RPG that combines dungeon-exploration gameplay with a charming story of two sisters striving to save their struggling tavern.

We find ourselves in Cassel Kingdom. Adventure Bar Story tells the tale of Siela, the protagonist, and her sister Kamerina, who own a bar that’s so close to collapse that they don’t even try to make it de rigueur for people to eat there; they just accept that the only customers who come do so to see Kamerina, and to heck with making good food. That changes when Gustav, a rich dude who owns the biggest restaurant chain around and operates on the principle of ‘if you can’t buy ’em out, squeeze ’em out,’ comes looking to expand. Faced with their tavern’s impending closure, the sisters and their friend Fred begin working on making it popular enough to stay.

The gameplay is split into two parts: the first is exploring areas to pick up food materials (shortened to ‘mats’). The second is making the dishes and serving them up in the bar. 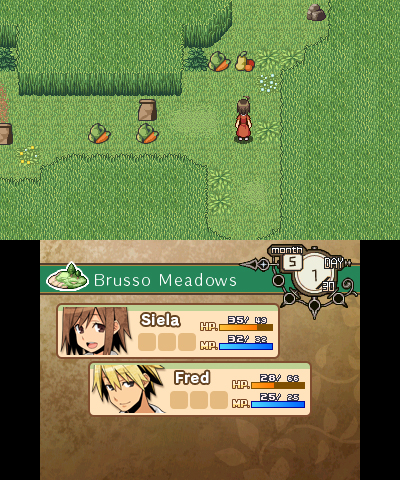 You can visit a dungeon (or a village to buy items) once a day to pick up mats while running into monsters and battling the occasional boss. Battles are usually random encounters which involve simple turn-based combat. The battles are enjoyable, especially the boss battles, which are quite challenging; healing items are very important. Just about the only thing wrong with dungeon-exploring was that you can’t walk diagonally, so I had to adapt to using the D-Pad instead of the Circle Pad.

Before playing the game I thought that the cooking would be of secondary importance, but I was wrong. Adventure Bar Story succeeds in being a ‘food RPG.’ Alongside the customers, your characters also require food. You don’t level up by battling, you level up by eating. Instead of EXP, you earn EP from battles which unlocks new skills for your characters.

Once you’re done dungeon-exploring, you return to the bar to prepare dishes using mats and a tool such as a blender, an oven or your bare hands. You can either make original recipes using whatever ingredients and tools you like (most of my original inventions resulted in failure, causing the materials to be wasted), or from a recipe. Lots of recipes you’ll have will be Hint Recipes, meaning only part of the ingredients are selected beforehand and you have to make an educated guess choosing the rest. Once a Hint Recipe is successfully used it gets included in the ‘Makeable’ section, where you are shown the foods you can make using your available mats without guesswork. You can also learn some recipes from cookbooks in houses. Emoticons beside the recipe name show how thrilled or bored customers will be with that particular dish when you open the bar that day.

The anime art style is charming, the battle animations are good and the character sprites look superb. The music was decent and did well for the game’s appealing atmosphere, although I didn’t find any BGM particularly memorable.

The game does itself proud in terms of presentation: an excellent localization coupled with easy-to-navigate menus; random encounters and notifications about mats are handled in such a way that the game never feels like grating. The story is not an epic, but it’s so charming in its simplicity and the main character is so endearing that I cannot help but gush about it.

Adventure Bar Story’s recipe for success lies in its simplicity and its balance of cooking and exploring elements; it’s a fun romp that gets better the farther you progress in it. Bon appetit!