Back in 2013, QubicGames released AiRace Speed on the Nintendo eShop. 3DS Pedia’s reviewer Dilawer Soomro took quite a liking to the game back then, so I expected good things of AiRace Xeno, the next installment in QubicGames’s futuristic jet-flying, sound-barrier-breaking series. So how did it turn out?
Well, first of all, despite its high production values, AiRace Xeno is a very inexpensive game, costing only two and a half dollars and offering up nine levels through which you fly three space-ships in the shortest possible time. Let’s get started on the presentation first.
The menus are very smooth and fit in perfectly with the game’s futuristic theme. What’s great is that load times are basically non-existent in this game: it’s perfect to play in short bursts. When you restart a level (as you always will when you crash if you’re aiming to get a gold star) you’ll be back at the beginning in no time. Also, you can restart a level at the press of a button when you crash, which lessens the frustration of missing out on a gold star because of the three-second penalty each crash earns you.
The gameplay is very challenging. You control your ship with the Circle Pad or the stylus (you can change the control scheme in the options) and avoid obstacles while speeding through the levels. The Circle Pad scheme works best. Pressing L and R on that scheme makes your ship tilt left and right, respectively, to help avoid obstacles. Pressing A turns on the Nitro and gives your ship a huge speed boost. Crashing into obstacles (you’ll also crash if you move your ship against walls too much as well) gets you a three-second penalty for each crash – the extra seconds are added to your total time when you finish the level. This makes the game more challenging.
Don’t think you’ll be able to play all nine levels just like that – you need to earn enough stars on previous levels to unlock the next one. You have to take your ship through the levels as fast as possible to earn bronze, silver or gold stars depending on the time you took to go through the level.
Here the game runs into the first of very few inconsistencies. Some levels have a very tight time limit for the gold star and more than once I missed out on a gold star by milliseconds. Strangely, the first level seems to have this the most, and going through  the whole level with a constant boost of Nitro is the only way to get a gold star on such levels. On other levels the time limit is so lenient that you can even afford two or three crashes and still get a gold star. Otherwise, the gameplay is challenging, fast and enjoyable. 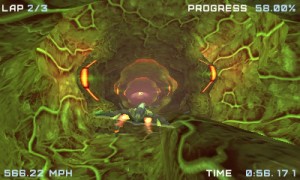 The 3D effect is actually very good and adds plenty of depth, but the sad fact is that ghosting effects occur almost the whole time unless you keep your 3DS absolutely still. The music, while it fits in with the game’s futuristic setting, wasn’t particularly enjoyable, at least for me – some of the techno tracks seemed too much start-stop and weren’t timed at all with your ship’s speed although that seemed to be the intention.
The graphics are similar to those of AiRace Speed, except that the environments and objects are even more smooth now. With a large amount of detail in the tracks and some good track design, the game looks absolutely stunning. The ship models were a little jagged but still fine, and the slicing-through-the-air effect produced on the wing-tips at high speed looked very good.
AiRace Xeno may seem skimpy in terms of content, with only nine levels, but its low asking price makes up for that. I also felt that it was more of an expansion pack for AiRace Speed than a brand new game, but that didn’t really mar the enjoyment for me. A high-speed enthusiast who likes a challenge will undoubtedly enjoy this game, especially if said enthusiast enjoyed AiRace Speed.