Are you in the market for a high pace action twin shooter? Ready to experience joy, regret, and tears all in the span of a few mere seconds? Have you ever wanted to be a freaky big head android? If you have ever asked these questions then Assualt Android Catcus may be for you.

The game starts with carefree Catcus responding to an emergency call for a ship that has been severely damaged. Once aboard various rebel robots start attacking. The once-loyal robots seem to be after any android. It’s up to Catcus to find out what exactly is going down. 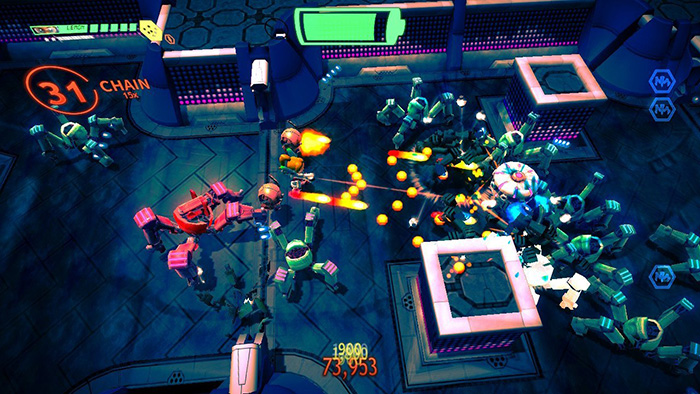 The gameplay of Assualt Android Catcus+ is where the game shines. Players control one of nine different androids, each android has its unique main weapon and sub-weapon. Character differences range from being able to use a flamethrower, shotgun, rockets, drill. etc.

You use the left stick to control your character and the right to aim your shot. If you have trouble aiming your shot there is an aim assist mode option. R/ZR is for shooting your main gun while L/ZL is for shooting your sub-weapon. This game uses the battery juice as your main lifeline so once you run out of battery juice you will fail the stage. You will have the chance to earn battery juice and other perks (such as extra ammo, a stop motion lockdown, and the ability to move faster) through enemy drops. 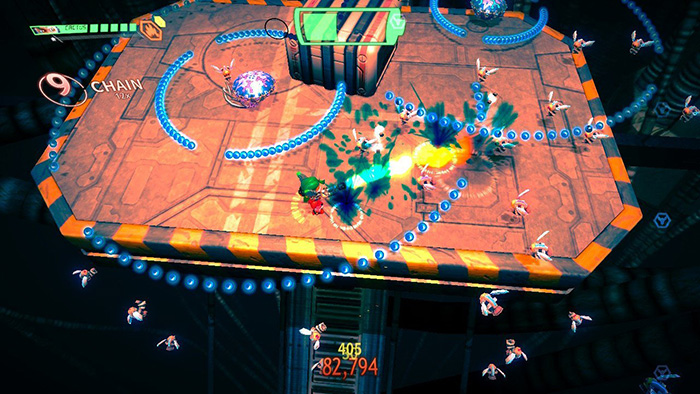 The game has twenty-five levels spanning across five different zones. If you aren’t a high score chaser this game may seem short. However, if you are you will quickly feel right at home for achieving greatness. The levels themselves vastly change from level to level. Some levels with fall and collapse where others will be on moving elevators or even have heat damaging floors. Always something catching your eye as you play through these levels.

For as short as the game is, the enemy range was pretty decent. You will encounter repeats of enemies with slightly different skins and life points. Even though I was not the biggest fan of the enemies’ actual design they work and fit in well with the game’s world design. Each type was visible and had its own characteristics. This is an important detail due to the number of things that can appear on the screen at once. I never experienced any slowdown in either dock or handheld mode.

The music in this game never really stood out to me, but there was never a song that threw off my groove. The game offers a jukebox section in which you can listen to that game’s tracks. 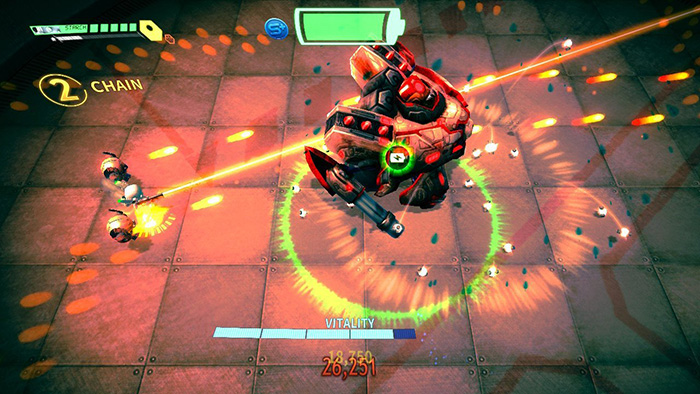 As stated earlier, this game’s replay value is all in its scoring system. Getting the highest rank requires you to keep up a constant killing streak, not getting knocked down and understanding the level. You can compare scores with your friends through the online leader board. There’s also a daily mode, boss rush and an infinity mode which is a level drop of the campaign’s levels randomized. The best thing about this version is the campaign plus mode. It’s a revamp more intense version of the campaign mode. These levels feel new due to the number of enemies that pop out and you will encounter more difficult enemies much sooner.

In conclusion, Assault Android Cactus+ is a tightly well-crafted game that offers high intense situations that give you a “just one more level” feel. The game is just a joy to control and is very accessible to newcomers. The only real cons against this game are the bare bone story and lack of online co-op. This game is always in my rotation and I can easily recommend this to most players, just make sure you are willing to learn from your deadly mistakes.

Assault Android Cactus+ gets an 8/10.