THE BIKE IS WORKING AGAIN 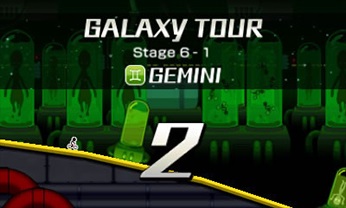 GAMEPLAY:
Bike Rider DX2: Galaxy is the sequel of Bike Rider DX, where again it’s an auto-scrolling horizontal game which is divided into two modes.

The Galaxy Tour is long as usual, featuring 12 initial stages, having a different style and 5 levels each, and after watching the credits, another batch of special levels making a total of over 90 levels. There’s also a free DLC that adds another five levels, therefore you can say there is plenty quantity of content offered.

Every level has a duration in the range from 30 to 60 seconds, where each level contains three different coins across the level. After collecting all of them, you can get a gold crown or a silver one (if the horizontal controls were used).

There’s also a little explanation about the quantity of difficulty a level has (with a number), where it increases greatly with the quantity of progress you do. Sadly, this time the level design in overall isn’t greater than the first game, providing less variety and lack of certain elements the first game had. 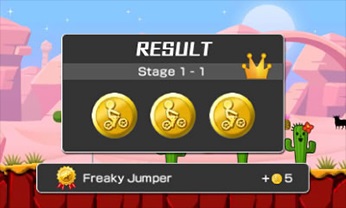 The other mode, Grand Prix, is the endless mode of the game, however,  this time there are two main changes: you can select the stage you want (if you unlocked it) and there is an online leaderboard. There are also two difficulties, Normal and Hard. The ‘Hard’ difficulty is unlocked after winning 10,000 points in the ‘Normal’ difficulty.

The controls did not change from the last time: you jump with the button A (where you can do a double jump pressing button A again) and increase or decrease the speed of the bike with the Circle Pad or the Control Pad. You can also do, with luck and skills, more than a double jump.

Bike Rider DX2 also brings two new power-ups to the game, like the Drill rider (allows you to crush stone blocks), Wing rider (you can fly pressing the button A) and the Frog rider (slow you down and also makes your double jump higher).

The other three, that comes from DX, are the Propeller rider (allows you to do three jumps meanwhile you glide a little), the Rocked rider (increases your speed) and the Glider (allows you do glide a lot, and you have three small jumps). 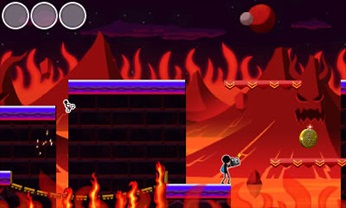 GRAPHICS AND SOUND:
Bike Rider DX2, like the previous game, still looks like a mobile game but this time it’s better in a lot of aspects, for example, you can find a larger variety of designs for each stage, the 3D effect works perfect and some presentation aspects are excellent.

Of course, there’s no need to say the game features a Japanese style for the graphics and most of the soundtrack, not exactly from the anime, but the game constantly says “made in Japan”.

The soundtrack of the game is really good, like Bike Rider Bike RiderDX, some songs feel generic and other songs are just excellent, but again, it’s a great work. 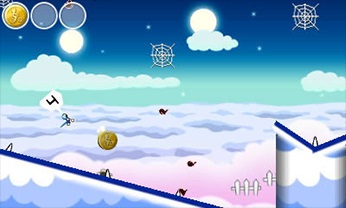 PRESENTATION:
The presentation of the game is excellent. The game presents an excellent interface and menus, a great quantity of levels, an excellent manual, online rankings, a lot of replay value and a lot of fun.

The only things that the game lack are a few options like save, reset and audio options. It would have been great to listen to the music only with headphones.

There isn’t a big use for the tactile screen, but being honest, it isn’t a big deal for this game because it won’t do a big change.

CONCLUSION:
For $2.99, you get a great game with a good quantity of levels and great replay value, including a great soundtrack and nice graphics. For that price, it’s just a steal.