Cake Ninja 3: The Legend Continues is the fourth entry of the Cake Ninja series and the first one to hit a home console. And just like the previous three entries on the DSi Shop (and the eShop on your 3DS), it’s basically a Fruit Ninja clone… 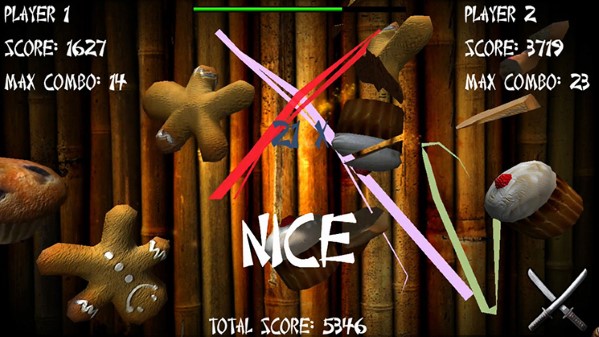 There is a total of six modes you can choose from, and while the basic mechanic of the game is to cut what is on the screen, the objectives and gameplay change depending of the mode:

There are two different ways to play, with the Gamepad using the Stylus on the tactile screen or with a Wiimote aiming on the screen. While I wasn’t able to try the motion controls, the tactile controls work well. Also, each mode has its own online leaderboard featuring the best 100 players. 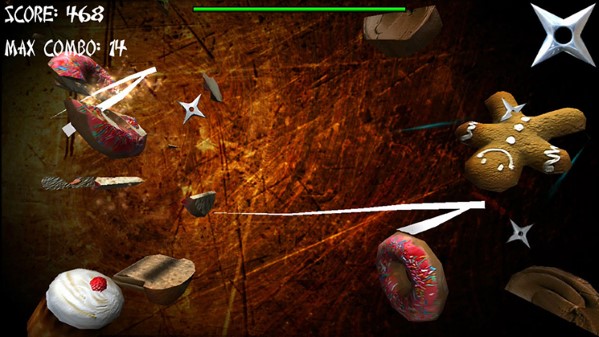 The graphics are just right, the models are nicely made but can be better, the interface is okay, the texture quality is nice and the frame-rate works well. There’s also a little video loop on the title menu which is a nice touch.

The soundtrack features good quality songs and some effect sounds are well done, but the voice acting is mediocre, the boot-up sound is annoying and some sound effects are average. The only flaw is the music stops if there’s a lot of constant sound effects, but since it isn’t due to lag or something like that, it won’t affect you at all.

The presentation is quite simple featuring a simple interface, a nice quantity of modes, the controls work well and the online leaderboards are a great touch that increase the replay value, but there’s nothing else to praise.

Conclusion:
Maybe it’s a clone but this time Cypronia did a nice job; some aspects can be better but for $5 it’s a nice entry to the eShop. I wasn’t able to test the multiplayer mode (my Wiimote is broken at the moment) but my experience during the single player modes was nice.