Who is Anna? – Anna is a merchant from the Fire Emblem video game series. She also sells goods in Fire Emblem Awakening. She shows up for battle as an ally in paralogue 2 and paralogue 4 of the game. Find out if she can be recruited below. 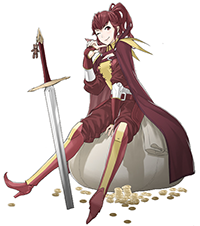 ( Photo of what Anna looks like in Fire Emblem Awakening )

Can Anna Be Recruited in Fire Emblem Awakening

When I played the game, one of the bandits made it at the village’s gates, and it closed. Anna was still alive, so I was fine and continued the gameplay without worry. After beating Victor and saving Anna, one of her new shops appeared on my map. There were discounts, however, that’s not something out of the ordinary. The strange thing is, her shop disappeared after I purchased a rear item and exited the shop.

The first time you get to see how Anna fights is in Paralogue 2 of the game. She fights off bandits, trying to protect the villagers while you and your party members try to defeat Victor and his men. She can take a hit and knock out an opponent. Basically, she’s a good fighter, and that’s why I wanted to recruit her so badly. One thing she surely is, is overconfident.

There were many times she fell in battle. Most of the times she picked the fight that she just could not win. When she got lucky and somehow survived one of those archer’s arrows, my men could not reach her in time. Yes, she died during the next phase. It took me over 10 restarts to come up with a good strategy to try and save her. After, it took me over 25 restarts to actually save her. My game mode was on ‘hard’ (might be different if set to ‘normal’). I can’t imagine saving her in either ‘lunatic’ or ‘lunatic plus’ game modes.

Tip on how to easily beat Paralogue 2 and save Anna

Sully and/or Stahl are the key players to save Anna. In the map, they’re the best when it comes to advancing. Let Frederick and another powerful character team up with both of those characters to march towards Anna. Of course, when their HP were getting low, I switched and attacked – that’s where the powerful characters come in after you advance them close to Anna. Sumia could have helped, but the archers are too dangerous.

I teamed up Frederick with Stahl to ride towards Anna. Once Stahl weakens, switch to Frederick for the slaughter to begin. I used Kellam and my main character to attack the bandits with axes and archers who were above so that they did not disturb the other characters’ battles. Teaming up Vaike with Lon’qu increased his power to take down the bandits on the front lines. I used Sully as an alternative to Stahl, so if I needed an extra man to get closer to Anna, I would be able to. With the horse riders, after advancing to a certain distance without enemies, it’s best to separate the characters instead of waiting another turn just to separate – I eventually learned that this can be done in the game. Anna needs to dodge a couple of arrows and axes so that you can make it on time to save her. Try to get your team within range as soon as possible, and taking out the archers is the #1 priority.