Can a game be too child-friendly? Taking Cypronia’s Color Zen Kids into consideration, the answer may be a yes. Sure, it’s cute. It’s charming. It’s a problem solving game, and that’s a great form of edutainment for younger kids. But does it stand up to the ‘regular’ version of Color Zen? And, even more importantly, does it really provide kids something that will keep them amused for a while?

As a title aimed at a much younger audience, Color Zen Kids does well in terms of visuals and presentation. The colours are brighter, the soundtrack is more appealing the the young ‘uns, and the difficulty has been dialed down a great deal. Load times take only about a half a second for auto-saving, and at 92 blocks it’s a very small download. The shapes are mostly charming, comprising animals, animals and more animals. They are also bigger, making the game easier.

The upper screen and the buttons have no function at all; the upper screen simply displays the title, so there is no 3D effect since it’d be pointless anyway. The touch screen is used to do everything – play, select levels, etc. The gameplay has you moving shapes around to make two shapes of the same colour touch each other on the touch screen. When they do, the colour engulfs the whole screen, taking with it all the other ‘open’ pieces of the same colour. The level is solved when you fill the screen with a colour that’s the same as the border of the screen. So basically all you need to do is match two shapes with the same colour as the border last and Bob’s your uncle.

The black and white shapes that added more depth and challenge to Color Zen have been removed, but you can still skip up to five levels if you feel they’re too difficult for you. If you use the level-skip option and you’re above age 8 then you ought to be ashamed of yourself, because very little or no actual thinking is required to solve most of the levels; not for older gamers anyway, not for older gamers, especially since the earlier levels almost solve themselves. The game is more challenging for toddlers, of course, but it’s still quite simple. 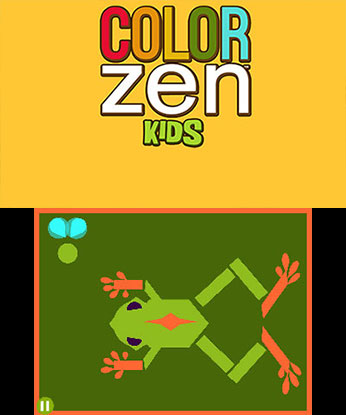 Although the game’s manual says that there are 100 levels, there are actually 120, divided into six chapters of 20 levels each. This is only slightly more than a quarter of the 460 levels included in the original Color Zen, and for the same price it drags down the game’s value for money. It seems like the developers intended to add more levels with different types of shapes (which is probably why the upper screen says ‘Animals’ at the level select menu) but never got around to it and released the game as it was.

There is no timer on the levels (which mostly take only a few seconds anyway), so just like the original Color Zen, as mentioned in our review of it, the game hasn’t a whole lot of replay value. What’s worse is that the game only took me 30 minutes to complete all the levels, according to my 3DS’s activity log. This comprised about 25 minutes of actual gameplay, one minute of counting the levels to make sure they were 120 and not 100 like everyone else said, and four minutes of going ‘What,’ when the game dumped me back at the level select screen after the final level. It’s obvious that the game, being intended for very young children, will take longer to complete by its intended audience, but it still can’t take long enough to justify it costing as much as the regular version of Color Zen.

The level design is good, though, and a lot of levels are more fun if you hold your 3DS sideways and see the shape as it was intended to be seen and play that way. As mentioned before, the shapes are charming, though I found a couple of them to be slightly creepy, like the one in the screenshot below: 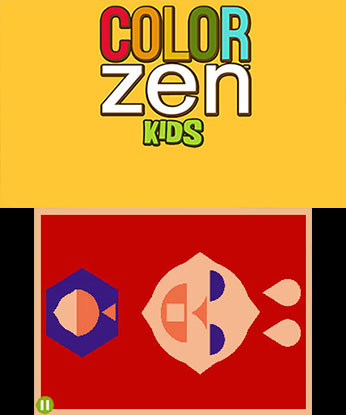 The soundtrack by Steve Woodzell is fine, but the sound effects, which seem to get louder every time you match a shape, were rather grating and probably the loudest in any 3DS game. I turned the volume down after a while for fear that the fourth and loudest matching sound effect, which is louder than an Iron Maiden concert multiplied by an AC/DC concert, would cause my 3DS’s speakers to fly out of the console.

Color Zen Kids does what it intends to do well enough, keeping your child amused for a while, but the fact that it costs the same as the Color Zen despite having only about a quarter of the number of levels, the low replay value of the game and the short time it takes to complete all the levels affect the enjoyment. Buy it only if you want to keep your toddler quiet for a (short) while and never play it yourself; otherwise, go with the original Color Zen.