Darksiders is a veteran multiplatform saga that combines action and adventure whose original title was released in 2010. Its second installment was launched two years later, called Darksiders II and in 2018 came the third, Darksiders III. The first two deliveries are available on Nintendo Switch as Darksiders Warmastered Edition and Darksiders II: Deathinitive Edition since April and September of 2019 respectively. This time, Darksiders Genesis takes a turn on the console as a spin-off with an isometric view that a priori reminds a lot of Diablo, but at the same time, it is different, presenting a very Darksiders soul. This delivery, not belonging to the main saga, was developed by Airship Syndicate and distributed by THQ Nordic. Surely many of you will know its developer since it is the same as Battle Chasers: Nightwar.

If the name didn’t already give it away, Darksiders Genesis is a prequel. Darksiders’ original hero, War, and the previously unplayable fourth horseman, Strife, team up for a quest to maintain the balance for the charred council that, over time, reveals itself to be very relevant to apocalyptic events of the other games. In true prequel fashion, it’s a heavy lore hit for fans of the first three games with returning characters in their younger forms and different contexts. Despite this, there isn’t all that much story here. The missions feel like excuses to send War and Strife out into different locations, with only a few snippets of dialogue, and the occasional semi-animated comic cutscene to help keep the plot moving forward. For anyone who isn’t already inundated by Darksiders mythos, this will not be a thrilling tale. 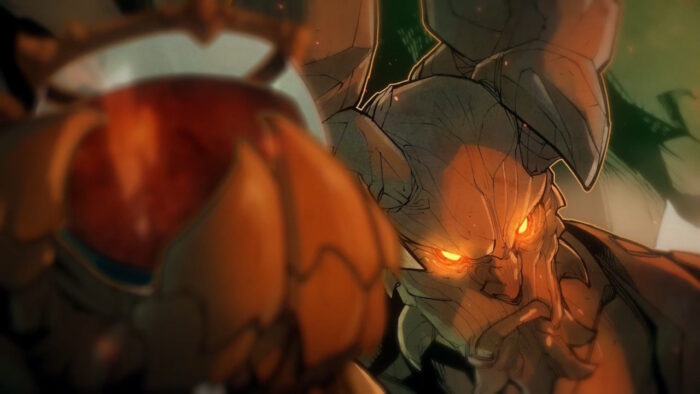 Darksiders Genesis is very different from its three installments of the main saga. In addition to playing solo, one of its main features is to play in a co-op mode either locally or online with another player. Players can choose one out of two characters to explore different places according to the level objectives and fight different types of enemies while solving puzzles and platforming challenges.

As previously mentioned, there are two protagonists: Strife and War. The first uses his guns, Mercy and Redemption, while the second uses his sword Chaoseater. Each of these characters presents a different fighting style. Strife is more focused on remote combat with different types of bullets while War is more focused on melee, being able to make combos and get improvements in the purest hack and slash style. Both can perform different actions: attack, block, dodge, etc, but it does not end there because as you move forward in the adventure, you will unlock more skills for each of them that will not only help in fights but also in solving different puzzles. Empowering both characters will be crucial to face the different enemies that appear (before entering each chapter, they will indicate the recommended figures for each character) and you can also select the level of difficulty.

Strife and War can discover new types of ammunition and improvements respectively throughout the missions that improve their battle skills and can give them an advantage. On the other hand, both characters will fill their anger meters while fighting and collecting souls of anger. Each rider has his own anger abilities, which serve in inflicting damage and controlling the masses of enemies.

Players can improve both characters’ abilities by equipping Creature Cores, which are randomly dropped by enemies. They do not only increase your stats but they can also be equipped to each character with buffs, which can also be enhanced by collecting more Creature Cores of the same variety. There’s plenty to play around with through the Creature Cores thanks to the variety on offer, whilst the fact you can mix-and-match means you can put together your own ideal build for both War and Strife. Don’t get the wrong idea, it’s not an overly deep system, but it works.

There is one flaw though: the random nature of obtaining the Creature Cores. There’s no guarantee that an enemy will drop a Creature Core, therefore luck will decide how many you will get and of what variety. This means you may have to replay levels and grind to find them at times, which could break the pace of the game. It can become annoying but by no means a game-breaking flaw.

As for exploration, it is important to note that not all areas will be accessible from the beginning of the game. Backtracking (revisiting scenarios previously visited) will be the order of the day since certain skills are necessary to get access to them and thus be able to get different items (keys, boatman’s coins, cores, etc.) In order to move faster through these scenarios, both riders can invoke their respective horses. 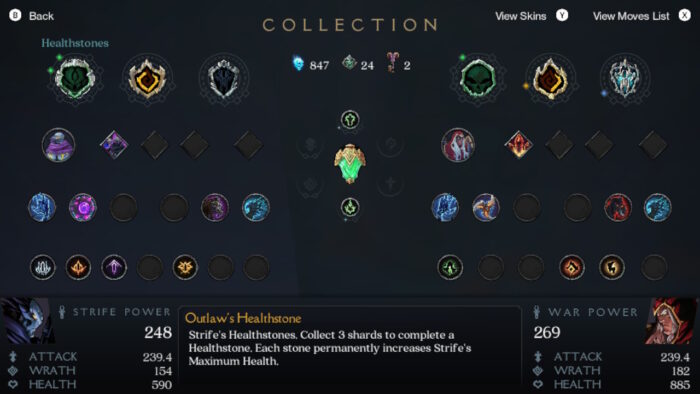 Once the first chapter has been completed, you will go to the Void, a place that will act as a base from where characters can be empowered from buying different objects and access the different chapters of the game. From there, players will be commissioning the different main missions that can be completed (a series of artifacts can be obtained at the beginning) and once within each chapter, some secondary missions (optional) will also appear, in addition to the main one. Additional rewards are given upon completion. Although most levels of the main story are somewhat extensive and require exploration to find all the various collectibles, there will also be some that are short, in which only defeating a boss is required. 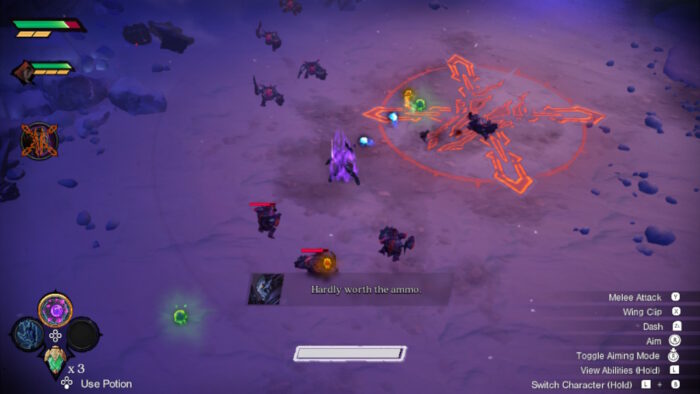 While Darksiders Genesis’ combat is brutally satisfying throughout, its platforming and puzzling elements were a little underwhelming. It’s not that either aspect is particularly terrible, but instead a bit fiddly. The platforming, for example, felt clumsy thanks to the demand for precision and the somewhat obstructive camera in-game, which is something that has been made even more difficult when playing on handheld mode. The puzzles on the other hand just felt a little bit too simple in design, while the fact that you’ve got to use both characters’ capabilities to solve some of them just made them a bit more awkward when playing the single-player campaign.

Darksiders Genesis lets you switch between War and Strife freely during the single-player gameplay, but what if you wanted to play the game with both horsemen at the same time? Well, this game features a co-op multiplayer mode that lets you play with a friend either online or offline. Unfortunately, there is no option to play with random players over the Internet.

It’s as simple as deciding on a co-op play setting before loading a save. The person can then request to join your game. The private mode allows you to play local split-screen co-op with a friend sitting next to you. To get started, use the purple co-op stones found scattered throughout the game world. A purple co-op stone is usually at the start of every major area. 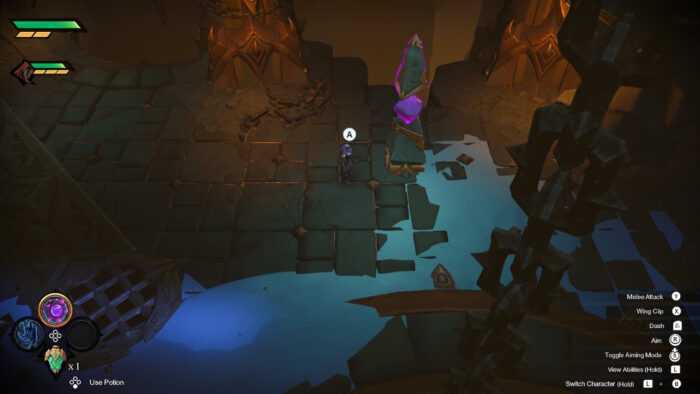 As for the graphics, we are facing a title that, without being a technical leader, stands out for its great artistic design once again. Visually, it presents intense and dark colors, a variety of locations (fortresses, forges, caverns..) which translates into arid areas, with lava, ice, etc. Unsurprisingly, the tone is dark and we must face dangerous creatures, although most of them are repeated more than the account.

In general, the title is fluid at 30 fps although its frame rate per second is somewhat unstable. This is especially noticeable in portable mode, where the fall of the framerate is more pronounced at specific times. Another aspect to note is that in portable mode, the game looks very dark by default, which makes it difficult to see where you are going, making it easier to fall down a cliff and lose a portion of health. Luckily, this can be easily be solved by increasing the brightness in Options. On some occasions, textures can take a decent time to load. As for the camera, sometimes it can be tricky to see, since being fixed is sometimes difficult to see the character when behind a structure and is being attacked.

Regarding its sound section, it presents good melodies even though none is particularly memorable, although they perfectly fulfill their mission. As for their sound effects, they are at a high level, and both the sound of the attacks and the screams of enemies and explosions are convincing.

Darksiders Genesis, despite being a spin-off and switching to an isometric view, maintains the essence of the main saga combining great artistic design and action, platforms, puzzles and home brand exploration, being a very entertaining title with replay value if you want to get all the collectibles. On a technical level, it has its problems with the camera, punctual drops of the framerate (especially in portable mode) and late loading of textures, but that does not tarnish that we are facing a good title that will satisfy fans of the saga.

A teacher who loves to spend time with his family. He also loves to read and play video games.