When was the last time you nearly hit someone with you 3DS? Never? Then you’ve been missing out. The third entry in the Denpa Men series allows you a great excuse to smash stuff. Why would you smash stuff? To catch Denpa Men of course. Denpa Men are charming little guys that live around radio waves. You catch them in AR, your cameras activate and the Denpas will appear around you. Next up? Shoot ’em! It’s a bit like Face Raiders, but with a twist; the more radio waves your 3DS can find, the more Denpas you’ll see. That means the best hunting places are shopping streets, airports and stations. High chances of hitting someone, but it’s also fun to see how your location affects the game.

The Denpa Men 3 revolves around a cliché; your main Denpas childhood friend has been kidnapped by some bad guy. He asks you to be his advisor and help him save his love. Then there is a plot-twist to the RPG; you don’t play a role. You play as yourself, a human with a 3DS that allows you to see Denpa Men. It’s your task to lead your crew trough lands inhabited by dwarves, fairies and a wide array of monsters.

A great feature is that while the game appears to be a dungeon crawler, you’ll soon find out the monsters are EVERYWHERE. Instead of being stuck in some dark cave, the monsters can appear anywhere on the continent but in the villages. The battle style is Pokémon-esque. Turn-based and strategic. But your guys have a lot of options; attacking alone or with the whole group at once, defending or even using their antenna powers. Antenna powers can only be used by Denpa Men with…antennas! Right. What their powers are varies from healing to massive attacks with names like “Supernova” and “1 Billion Volts”.  Unlike Pokémon catch them all isn’t doable, there are nearly endless different Denpa Men so be sure to catch only the very best. (Like no one ever was…) 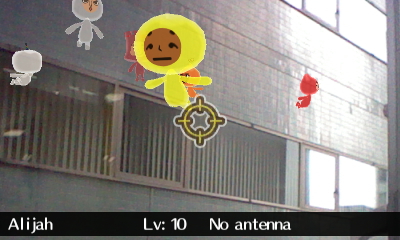 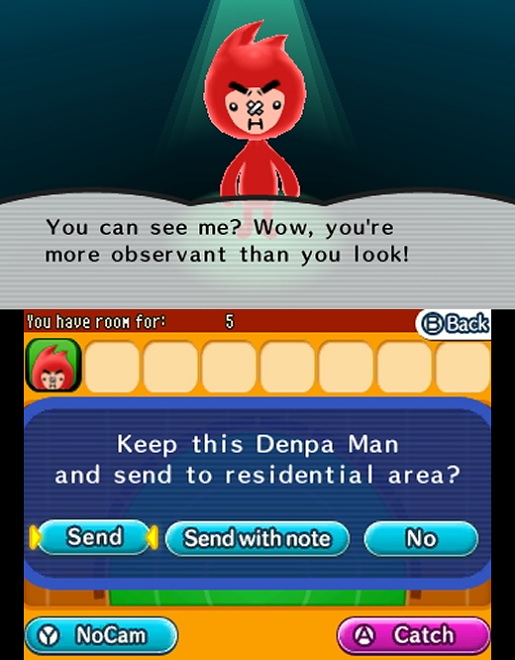 For all the customisation freaks out there (like me): not only can you change the attire of your Denpa Men, you can also grow flowers and decorate their houses.The graphics are neat. Full 3D, lots of colours and overall charming. Also charming are the monster names:
Developer 1: “How should we call this pig-like thingy that lives in this frozen area?”
Developer 2: “How about Polar Oink?”
Developer 1 “Polar Oink, sure.” And that is basically how all names in this game came into existence it seems. The monsters will give you a chuckle every now and then (a pig dangling at its tiny wings), but some are downright scary. Are you ready to face an octopus spider?

When your level becomes much higher than the monsters in the area, they will no longer attack you. Smart move. But neither will they evade you. This can be very annoying. Imagine you have to cross a room full of low level monsters. Sure why not? I said FULL of low level monsters, like no-place-to-walk-full, and you still have to cross the room. It means battling your way through which quickly gets boring when those things die after one hit.

While the game is not really replayable it features a lot of post-game content, from extra quests (more than you’ll ever finish) and finishing your collections (fish, furniture, flowers) to online competitive play against others in the Coliseum.

All in all, I would rate the game 90/100. 10 points missing thanks to incredibly annoying low level monsters and the lack of replayablity. But having spent roughly 45 hours on the game I can say those are the only cons to the game.