TIME TO JOIN THE ARMY! 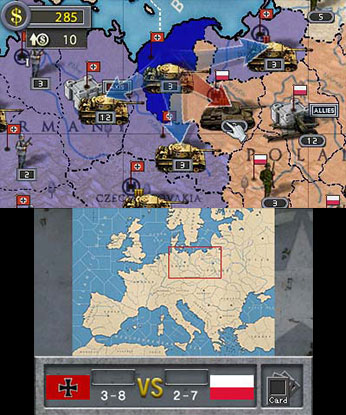 GAMEPLAY:
European Conqueror 3D is a strategy game and being honest, the game is practically identical to the previous entry, World Conqueror 3D.

This is war and you must think of strategies to win the battle, defeating enemy troops with yours. There are different strategies and possibilities in the game, including the luck factor that represents every battle, working using dices to decide the winner.

With time, you will win more territories and money. With money, you will be able to use cards to create more units, construct and level up your territories, make strong attacks and more. You must also  be prepared for everything because you don’t know the enemies’ actions, making the strategy stronger. 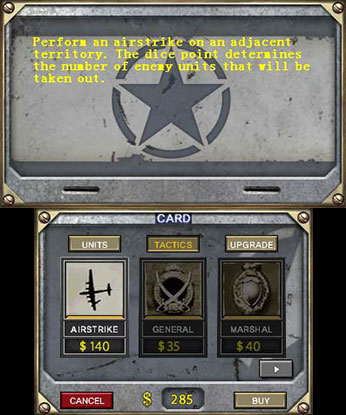 The replay value is really high. There are two different gameplay modes and different countries to pick, sadly you will need to unlock them first if you already had a favorite.

The game features two modes: Conquest and Campaign. The first one allows you to play as one of the 12 countries from the Axis Powers or the Allies, where your objective is dominate Europe. The second one is a story mode focusing on four of those countries: Germany, Britain, France and Soviet Union.

The controls work very well as well: you move the cursor with the circle pad, A button to accept, B button to cancel, Y button to move the cursor faster, X button to end your turn, L and R buttons to switch your army to those which have no acting units and with the Start button allows you to access the pause menu. 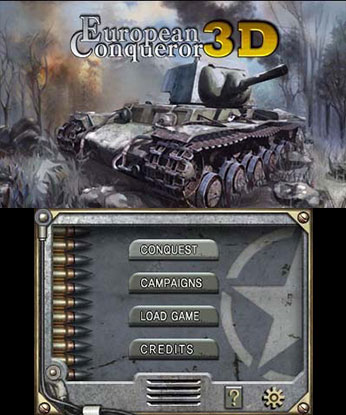 GRAPHICS AND SOUND:
There isn’t a big difference with the game’s graphics, the presentation of the menu is better this time and some elements are re-done. Like the last time, the game features nice graphics with nice animations and a well done art style. The 3D effect this time is excellent, however, it’s still just a cool addition to the game. Some materials have also been recycled but nothing important to care about.

The only real flaw I discovered in the game is in the audio department: everything is recycled, that means, the same sounds and the same music.

While I don’t care at all for the sound effects (that were well done), the music was already too repetitive for the previous entry and for those who already bought World Conqueror 3D will have bad news when purchasing this game (but you can easily hear your own music instead).

PRESENTATION:
The presentation of the game is well done. There was already a good quantity of options before, with menus that were easy to navigate. You can also see the controls and the description of icons anytime you want by pausing the game.

This game also fixes the main problem from the previous entry, the lack of tutorial. This time, they show you how to play, allowing an easier start for those who want to discover the genre.

CONCLUSION:
If the previous game offered a unique experience for the genre, this one does the job even better. For only $3.99 (or $0.99 in the first week), European Conqueror 3D is an excellent entry for the fans of the genre or for those who are interested in trying it out. With a better presentation than the last time, it’s really worth its price tag.