PREPARE, LEARN TO PLAY, FIRE!
The famous WWII strategy game saga has finally arrived on the eShop but now you will know if this game keeps the quality of the previous games. 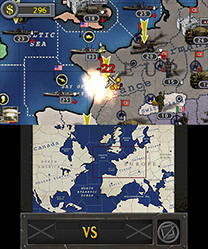 World Conqueror 3D’s gameplay is really good and solid but the lack of a tutorial in the game can make it hard to learn for people who do not play games in the genre.

It took me hours to learn how to play it so I will make the explanation simple for everyone to understand.

The controls are well made and easy to learn. You have to defeat enemy troops with your troops, and there are a lot of possibilities and strategies in the game.

The battles work with a luck-fashion system using dices to decide who will win. You have to win more territories to earn more money and with that, the possibility of buying cards. Each card has an excellent description of what they offer.

Those cards will allow you to:
– Create more units such as soldiers, tanks or artillery.
– Add a fortress and construct your territories.
– Allow your troops make actions on the sea.
– Add attack or defense.
– Do strong attacks (like nuclear one) or just airstrikes.

Forgetting the luck factor of the dices system, the strategy level of the game is huge like its replay value if you love the genre. It’s a game you might play for over 50 hours, assuming you enjoy games of this genre, of course.

During the gameplay, you will not know what the enemy will do, and being able to play the role of different nations and play different campaigns, the game won’t be too much repetitive.

To be honest, the game was hard to learn but once you understand how to play it, you will enjoy it (assuming you you like the genre, of course)

The game looks good with nice animations and a nice art style but there’s nothing spectacular. It looks a lot like a mobile game, however, its design is still very good and nothing boring.

The 3D effect is well done but it won’t add anything spectacular to the gameplay. Still, it’s a good addition.

The music of the audio is really nice with a war feeling but with time you won’t notice it at all because you will need a lot of concentration for the game itself.

The fx sounds are limited but well done, and with long time sessions won’t get annoying so the developers did a good job in this department. 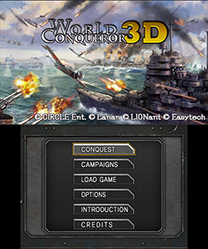 The game presentation is good with different options and menus that are really easy to use.

The main problem is the lack of a tutorial. The game has a section called ‘Introduction’ but it will show the rules of the games. You have to learn how to play it by yourself.
Therefore, it isn’t gamer friendly at all.

VERDICT: 72/100 (Great)
This is just an open door to the genre fans and for people who want to try different games. Having a fair price and a lot of replay value, I think a lot of people will really enjoy World Conqueror 3D.