After exploring Tokyo for a bit in Shin Megami Tensei IV, I decided to head back into Mikado to see what new quests were in store for me at K’s Tavern. This was around the time after I defeated Peallaidh in the game. I think you have to beat him before the quest can appear.

Update: Thanks to an email that we received, you should know that this quest is given by a demon that you talk to during battle around the same time of defeating Peallaidh.

The name of the quest is Isis’ Search for the Coffin.

There, she tells you about her husband’s coffin and how it’s being carried to the deeper levels of Naraku because of the river. The thing is, she does not know which level of Naraku the coffin is in, therefore, you have to search for it yourself.

Which level in Naraku is the coffin at?

Directions to find the coffin in the 4th level of Naraku

The screenshot below shows you a map of the 4th level of Naraku : 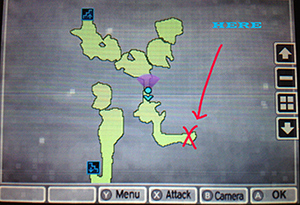 The red ‘X’ from the screenshot above shows the location where you must move your character to, to find the coffin. Go towards the dead end and you should notice that you can perform an action at the wall. Press the ‘A’ button when standing by the wall.

Remember, Seth is the enemy for this quest, so be prepared for a battle.

Updated: It is possible to avoid battling Seth. A few pointers if you run into him during the quest – (1) he’s a dragon, (2) he shows up on the map as the pink object, (3) your protagonist can’t attack, (4) the coffin takes damage when the protagonist is attacked.