If you’re one of those people who read R.L. Stine’s Goosebumps as children, Halloween: Trick or Treat 2 will definitely intrigue you. I know, because I am like you, except I’m far more shameless. I read Goosebumps and I actually admit it. So when 3DS Pedia’s administrator and part-time Disney villain Marc asked me to review the Microvalue-published Halloween: Trick or Treat 2, a sequel to the critically unsuccessful DSiWare hidden-object game published sometime back, I took it on gladly. Interestingly, just a week before this game’s release, Microvalue had published Mystery Murders: The Sleeping Palace, another hidden-object game also for the 3DS.

Before you even begin to consider Halloween: Trick or Treat 2, you need to know that it’s a hidden-object game, which is in itself a very polarizing genre. Such games require patience, tolerance and an abundant investment of time. For people who aren’t fans of squinting at every detail to find a minuscule article in an environment with plenty of detail but very little to no movement, Halloween: Trick or Treat 2 is a no-go. But for people who are interested in the genre, it’s an idea. It doesn’t hurt that the 3DS seems a great console for hidden-object games with its touch screen. Disappointingly, the very thing developer Virtual Playground hasn’t taken advantage of is that the game is for a handheld system with a touch screen. Halloween: Trick or Treat 2 feels more like an abandoned PC game project hastily packaged into a 3DS eShop release than a game designed with the 3DS in mind. 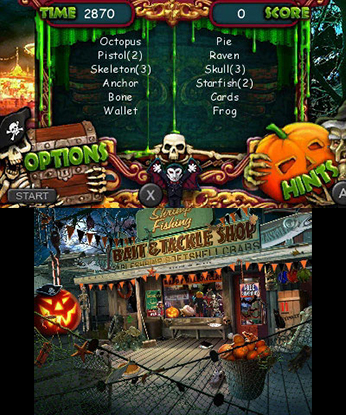 You play as Mike and Emma, two kids (Goosebumps kids to the max at that) who go to a Halloween fair. What basically happens in object-finding is this – the two of them show up at a location with a mostly static, zoomable image; one or two lines are spoken (in text, with no voices), then you’re given a list of items on the 3D screen to find in an image on the touch screen. There are lots of items in the images and the lists are randomized, so you can’t memorize locations and ace a level by restarting it. This is a good thing as all you can rely on to get the highest score you can is the sharpness of your eye and your intelligence – a valuable commodity indeed in this game since the objects listed aren’t exactly what you’re expecting them to be: for example, a ‘cat’ you have to find might turn out to be a cat-shaped decorative design on a woman’s handbag. So in object-finding itself the developers haven’t done much wrong. It’s a difficult game, but aren’t all hidden-object games like that? As said before, such games require patience.

There are also hidden vampire ornaments which give you 100 points and ‘chance items’ that give you a small mini-game of stopping the cursor as it goes around skulls and jack-o-lanterns. The latter get you extra points while the former subtract some of your points from your score.

Some items, to be found, require you to search or interact with an object in the environment. The cursor turns into a magnifying glass on such objects and they can then be interacted with to find the required object. This is actually pretty frustrating because the cursor only appears when you drag your stylus over the touchscreen, which you can’t do all the time, so such objects take a lot of time to find and more often than not I ended up using a hint for them – yes, the hint system in this game is much more forgiving than other hidden object games. You press the A button and a purple outline momentarily appears around a hidden object for you to snatch. Your hints recharge fast enough and there is no penalty for them, which people who aren’t as devoted to hidden-object games as others are will appreciate.

After each hidden-object scene, as a reprieve of sorts, you get a different minigame each time. Some of them are easy, some of them are fun, most of them are brutal. Thankfully they can be skipped, though of course you’ll lose a lot of potential score. Some minigames make good use of the 3DS’s two screens (the spot the difference minigame, for example) while others are pretty tedious. There’s one in which there are about a hundred all-look-the-same pieces for you to swap with each other to make a Halloween poster. I can’t see anyone ever not skipping it, and even though I tried I ran out of time before I’d even made head or tail of what it was. 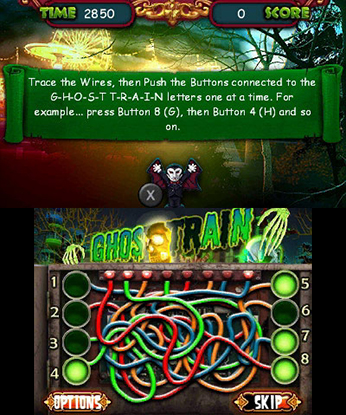 But let’s get to the game’s two main faults: its rough presentation and more importantly, the unshakeable feeling that this game wasn’t made with the 3DS in mind at first. About the presentation – have you ever noticed the slight fade-in and fade-out effects of character sprites in in-game conversations, and the way text ‘unfurls’ in the dialogue of a lot of games with text dialogue? These effects are almost unnoticeable unless you’re looking for them, yet Halloween: Trick or Treat 2 made me realize how important they were. The game lacks such effects and as such the presentation is far from smooth. It doesn’t make the game bad or anything, but in some way it affects the overall package. Additionally, every time you finish a level, you have to wait a few seconds for the game to realize it, but the timer doesn’t freeze so you lose 20 to 30 points every time because of that.

Now to the game’s biggest fault of all: the feeling that it wasn’t originally intended as a 3DS game. It may have been so, but it definitely feels otherwise. Touching the screen with your styls makes a mouse-pointer cursor appear and you drag that around. Tapping objects you see does collect them, but there’s a slightly unpleasant lag because of the mouse pointer having to appear. Also, the mouse pointer has to be there for the cursor to turn into a magnifying glass icon over objects you can interact with.

The story crawls along at such a snail’s pace that for a while you have to wonder if the pirate-took-over-Halloween-fair story that the game’s digital manual promises actually exists. This was obviously done to make room for more hidden-object scenes and it may be common in such games, but when I was expecting something to finally happen and then one of the characters said something that hinted I was going to be searching for objects again, I had to say: “Ah, no. Ahhh, no.”

It isn’t all bad, though. In fact, some things are well done. The sheer amount of hidden-object scenes and variety of minigames is definitely impressive and will likely bring joy to fans of the genre. The music is good and doesn’t distract you from object-hunting. The environments were mostly static barring one or two animated objects like someone waving their hand or a skeleton decoration’s eyes glowing, but they looked good (though when zoomed out their resolution deteriorated slightly).

The 3D pop-out effect in this game is so good that it’s painful to see it wasted. Wasted as in, you’ll be so busy hunting for objects on the touch screen you’ll rarely look at the 3D screen, so you should save your 3DS’s battery and keep the 3D effect off after you admire it once or twice. The text in dialogues and lists and strike-outs on names of objects you’ve found pop right out of the screen. So while you won’t be seeing the 3D effect much, do try it once or twice to see how well it’s pulled off.

In the end, Halloween: Trick or Treat 2 feels like an experiment, and at eight dollars – a price that’s a little on the high side for a downloadable game of its kind – it’s a pricey one. Hardcore hidden object game fans (do those sort of people even exist?) may be willing to spend that much money on it, and the game really does last a while. But it’s not just play time that determines whether a game was worth its price; the enjoyment factor is important too. And people who don’t have a dedicated approach to the genre likely won’t enjoy the game enough to warrant its price. In fact, many such players will probably not even be willing to tolerate the game’s shortcomings long enough to appreciate its good points. Halloween: Trick or Treat 2 is an average game in itself, but it may be a step to bringing some great hidden-object games to the eShop as long as Virtual Playground and Microvalue continue to improve their efforts in this direction – their other game, Mystery Murders: The Sleeping Palace already hints that they’re willing to invest in the genre.