The first time you battled against Adramelech, there was no chance of defeating him at your current level. The second time you battle him, you will finally be able to put out his flame or die trying. This occurs after fighting Krishna in the game.

Adramelech is a level 65 demon of the fallen race in SMT IV: Apocalypse.

How To Beat Adramelech in Shin Megami Tensei 4: Apocalypse 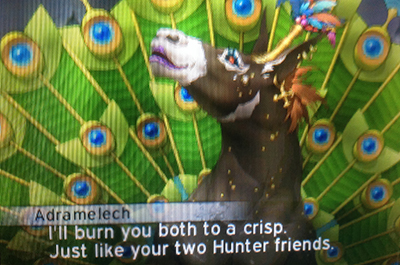 Adramelech is weak against ice skills, blocks fire skills and has resistance against dark skills.

After weakening him a bit, he will begin to use Hellish Brand. His Eat Whole skill will soon follow after (this skill is what you should be worried about).

The key to taking him out is by using ice skills over and over again to get skirmishes for extra turns. In addition, you must not let him exploit your or your demons’ weaknesses with his fire and physical skills. If you have demons that resist physical skills, use them.

The green uniform armor can be used to fight him to protect you from physical skills or you can buy one of the Hazmat armor from Ginza’s underground district for the resistance against Adramelech’s fire skills.

After dealing sufficient damage to him, he will try to say he can’t lose once Asahi is with you. He will then try to attack her and you will be given two options to choose from :

If you choose the second option (like me), you will take damage from Adramelech’s “cheap blow”, however, she will heal you later in the battle even if she is not chosen as your partner for the battle and Adramelech’s defense will fall.

Keep hitting him with ice skills and he will eventually fall.