Azrael is a level 67 angel of the Herald race. You will have to fight him in Shin Megami Tensei IV: Apocalypse during the Infiltrate Mikado quest. Before you fight him, you must fight off two hordes of angels (without saving in between). 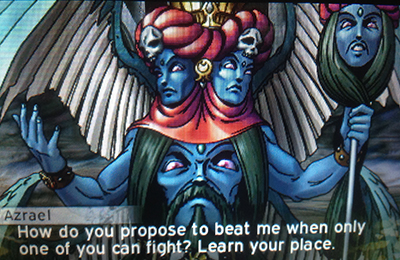 Preparing before the battle :

Azrael’s primary element skill is fire, therefore armor that has resistance or nulls fire skills will be extremely useful to you during your battle with him. At S’s Blacksmith in Mikado, you can purchase the Red Jinbaori with Macca. The Red Jinbaori nulls fire and light skills.

Azrael is weak to ice skills, blocks light skills and has resistance to physical, dark and fire skills.

He uses the following skills during battle :

It’s pointless to try to increase your stats while battling Azrael. He can use his debuff skill to reset your stats to their original numbers. Instead, it’s better to hit him with powerful ice skills to get the extra turns.

After injuring him a bit, he will ask his first question where you have choices to answer. He claims how he will let your friends leave the Eastern Kingdom of Mikado if you offer your soul to him in exchange.

You have the following choices to choose from :

After damaging him further, he will call upon support to weaken you and your party. You will have three choices to choose from again, however, this time the choices may not factor in to the battle itself : 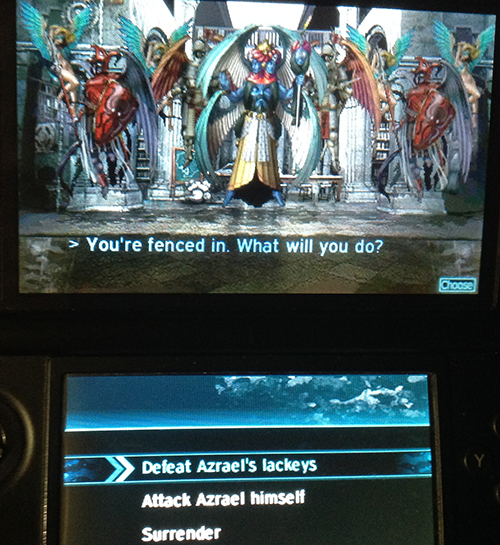 The first two options will be failures, however, I chose them to read what happens in the dialogue.

The third time you’re given choices to choose from is when Hallelujah asks you to trust him. In my playthrough, I chose to trust him and he ended up damaging Azrael enough to take away around 500 of his HP from one single attack.

After Hallelujah’s attack, continue hitting him with ice skills to finish him off.