Medusa isn’t as tough as Minotaur if you have the right demons to back you up. Just like Minotaur, Medusa has a weakness. Luckily, it’s easy to find demons that can learn skills that can gain you an extra move due to her flaw. That is the key to defeating Medusa. 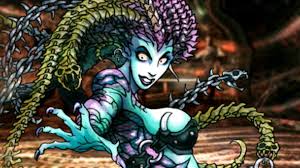 ( Photo of what Medusa looks like in Shin Megami Tensei IV )

How To Beat Medusa in Shin Megami Tensei IV

What is Medusa’s weakness? – The first thing that you should learn is Medusa’s weakness. She is weak against force attacks. If you have a Mazan stone or Zanma Stone, use them if your MP is low. Mazan and Zanma stones are items that can be used as a one time attack.

After several successfully hits during the battle, Medusa will ask you a question. For some strange reason, she wants to know if you appreciate the beauty of the statues in her collection. There are three options for replying :

The second time she talks to you during battle is when her HP is decreasing further. She says that you and the other samurai are nothing but dogs who only carry out orders. By now everyone should assume she’s a crazy person, however, I feel there’s more to the story.

Keep attacking her with force attacks and she will talk to you again.

The third time she talks, she’ll ask herself how humans can be so fearsome. By this time she’s at her weakest state and she pretends to give up on adding you to her collection of statues. Then she tells you to look into her eyes and that it’s not a trick. Everyone knows Medusa and how looking into her eyes can turn the person into stone, therefore, it is indeed a trick. You have three options to choose (the second option decreases her defense) :

After a couple more successful hits, Medusa will begin to crumble and the battle will be over. If you want more of a challenge, you can always choose options that will give her the edge (eg. give a reply that will increase her attack when she talks to you).