After obtaining the Jirae Talisman and entering the Sunshine 60 demon domain, you will eventually find Xi Wangmu. Xi Wangmu is a very powerful demon in Shin Megami Tensei IV, however, she has a weakness. This guide teaches you how to easily beat Xi Wangmu. 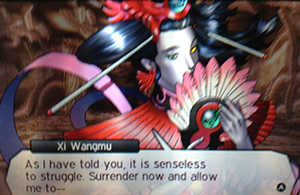 How To Beat Xi Wangmu in Shin Megami Tensei IV

At the beginning of the battle, every attack that you use against Xi Wangmu will only do 1 HP damage. After your first three moves, support (The Ring of Gaea) will come to help, however, they all die. On the bright side, their deaths were not in vain. From here, all attacks that you use should do normal damage and it’s up to you to strike the final blow.

What is Xi Wangmu’s weakness?

Xi Wangmu is weak against force element attacks. She blocks both dark and light element skills. Take note that I only used the instant KO dark and light skills during my battle with her. Ice, fire, gun, and physical skills all worked well.

What to do if your main character is low on MP?

If your main character is low on MP, hopefully you have demons in your party that know a force element skill. In addition to that, a Mazan stone or a Zanma stone can come in handy. Mazan and Zanma stones are items that can be used as a one turn force element attack.

Demons that I used to defeat Xi Wangmu :

Any demon with good HP that knows a force element attack should do the trick.

Xi Wangmu took out a good number of my demons when I battled with her. She is very powerful and has a massive amount of HP, that’s for sure. At the beginning of the battle when all of your attacks do 1 HP of damage, use skills that consume 0 MP instead of skills that consumes a chunk of your MP. After the Ring of Gaea members fall and Xi Wangmu weakens, keep throwing force element skills at her. She will eliminate a good number of your demons, but keep replacing the demons that fall and heal your protagonist when his HP is low (he was the only one on my team that could use items at the time).

What do you get for completing the Hunting Xi Wangmu quest

Nothing, however, the quest is one of the main quests in the game.