Creaminea is a synthesis material from the Ingot and Metal category in Atelier Ryza 2: Lost Legends & the Secret Fairy. You’ll need the Creaminea to upgrade weapons and tools in the game. Additionally, it’s an essential crafting ingredient for several quests (eg. crafting the Treasure Kit). This guide will teach you how to get Creaminea so that you can craft new items in the game.

How To Get Creaminea in Atelier Ryza 2

There are several ways to get Creaminea in Atelier Ryza 2: Lost Legends & the Secret Fairy.

Creaminea isn’t the easiest material to craft in the game, but if you have the right materials and the Morphing Recipe ability from the Skill Tree, it is possible.

Arknite might be tough to obtain if you’ve upgraded your tool ability; craft a good quality Gold Axe to have a low chance of obtaining it from some floor crystals (eg. floor crystals near the formidable foe in Glass Flower Forest). Degenesis Stone can be found at the Glass Flower Forest, Southern Outskirts, Ancient Mana Workshop, and the Sunken City of Stars; you’ll need a mount to dig it up when on your mount.

When crafting is not an option, the best alternative is purchasing it from Dennis’s Workshop. Creaminea will not be available for purchase from the get-go from Dennis’s shop; however, it will be unlocked after selling a Degenesis Stone to Romy from her Development menu. 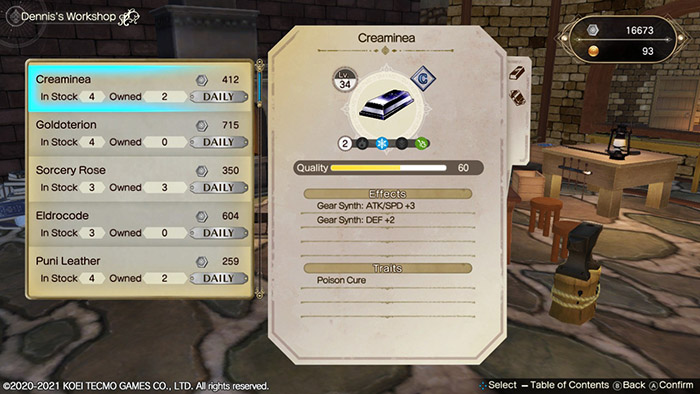 After giving Romy the material, Dennis will offer Creaminea for sale at 412 Cole per item. The stock can increase when you raise your Development Level at Romy’s store.

Item Duplication becomes accessible at a specific point of the story campaign. It shows up on the Skill Tree and costs a hefty amount of SP to unlock. Once you’ve unlocked it, you’ll be able to multiply items such as Creaminea.

Sacrifice unimportant materials you don’t need and get a sufficient number of gems. If you’re lacking in materials (which you shouldn’t be), head out to a gathering area and collect some materials to break down into gems. It costs around 3,354 gems to clone a Creaminea.

You won’t be able to get Creaminea if you don’t already possess at least one of it, but you can obtain an unlimited stock once you’ve acquired it with one of the above methods; that is, of course, assuming you have the number of gems to afford it.