If you thought that saving Anna was bad, take a look at Noire from Paralogue 15 (The Kidnapper’s Keep) in Fire Emblem Awakening. I have to admit, saving her is a piece of cake once you understand your enemy’s movements, however, she’s weak due to her low level.

This guide shows you how I saved her and beat Paralogue 15. 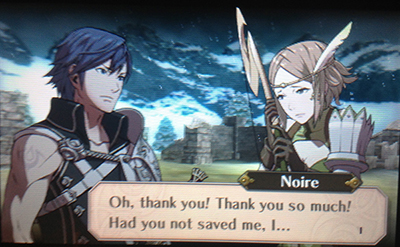 Here’s the rundown of what I defeated Paralogue 15 with. I was playing on the hard difficulty level, and classic mode (characters are permanently gone after defeated).

Note: I skipped a lot of paralogues, therefore, my team missed out on a lot of experience.

If you’re in my situation, you have to make sacrifices. From the list above, I had 5 characters that I was willing to sacrifice to save Noire. They’re Maribelle, Miriel, Ricken, Libra, and Gregor. Libra was my greatest loss after I made those calculations at the start of the battle. I also lost two characters that I did not want to give up – Vaike and Anna.

The enemy’s army in Paralogue 15 is huge and they’re very strong, making things a little complicated. Yes, the enemy’s army will strike your strongest character down in a heartbeat if you move him/her into their range. They move in groups, and multiple attacks on a single character will finish off the target easily.

Also, make sure to carry a couple of healing items to restore a lot of HP. 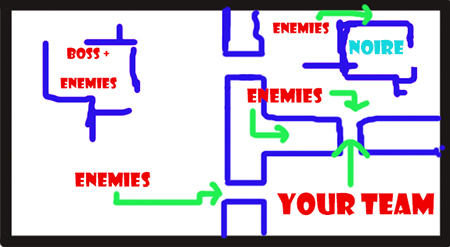 ( Map of Paralogue 15 showing enemy locations, as well as my team and Noire )

Important: do not send your entire team towards Noire. If you do this in the first round, the winged-soldiers will be within range of several of your teammates, and you will lose characters. Instead, push your weak characters (AKA sacrifices) to the right and wait for the enemies.

Back off from the top enemy’s range a little and send the main character (or a powerful magic user) to the horseback riding enemies located at the left of the map that marched towards your team. Make sure that only one or two enemies from the left can attack you. The wind magic should eliminate one or two of the enemies from the left after they attack. Send characters that you can afford to throw away to their death (do not attack the enemy – let them attack you during their turn) so that your main character would not die during the enemy’s turn. From here, finish them off on your own. You might want to pair Sumia up with Anna to avoid the horseback riders with bows (Sumia can’t survive a strike from a bow). I used Vaike (glass bow and brave axe) to eliminate most of the horse-winged soldiers, and my grandmaster (main character) was the key to winning. I switched Chrom and Sully around when one got low on HP, however, they were both good at supporting my team.

After taking out most of the enemies, use Sumia to fly to Noire. During the fight, one of the enemies would naturally make it to Noire, however, she can defeat the enemy if all bow attacks successfully hit during all of the three turns. Sumia should fly within range of Noire at the end of her turn. When it’s Noire’s turn, walk over to Sumia and pair up with her. The next turn, Sumia should be able to fly away from the enemies that are marching towards you, and meet back up with your team. It is important to take note that every move counts. Move characters to the nearest locations while paying attention to enemy attack ranges.

After rescuing Noire (assuming Sumia made it back in one piece to your team), send your weak characters a little distance away from your team and especially the enemies that are heading your way – yep, they’re most likely chasing Sumia. Use the grandmaster and any of your available powerful units to eliminate the group of enemies (I called them group 3).

The boss and his several soldiers aren’t going to move until you get close enough. I made the mistake of getting too close and was unexpectedly surprised. Yes, that’s how I lost both Vaike and Anna. One of the games I ended up saving Libra from the first three groups of enemies. However, in the end, he died by the hands of the last group.

The boss’s minions came to me, therefore, the boss did not move. I finished the minions off after they killed Vaike (they ganged up on him), Anna, and Libra. After, I marched towards the boss and eliminated him using the Grandmaster (my main character paired up with Tharja) and Chrom/Sully. Don’t let Sumia near the boss because I think he has a bow.