Ittle Dew is a charming puzzle adventure game developed by Ludosity & Ludosity AD and published by Nicalis and Ludosity. Originally released July 1st, 2013, and made its way to the Switch on August 15, 2019.

Ittle is an adventurer alongside her companion Tipsie who is a fox that helps Ittle along the way by giving her tips. The two had been drifting in the sea on a raft when suddenly they crash into and are stranded on an island filled with adventure for Ittle to explore as they try and come up with a way to get off the island. 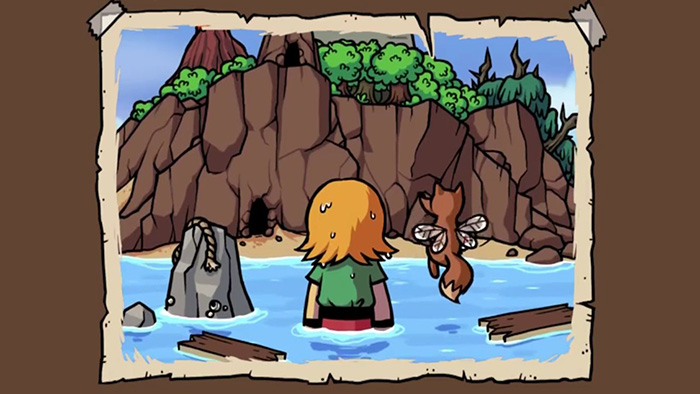 You play as Ittle going around the island and its various locations from castles to caves to dungeons, each with enemies to fight, puzzles to solve, and treasure to find. Exploring the area you’re in is made enjoyable by giving the player a clear visual on what areas they should head to on the map. While exploring the area, you cannot miss any items, as the way it is laid out makes it so you go through all areas needed to find and collect all necessary items to progress through the game. The combat is a bit lacking however, your range is very short so you have to be right next to the enemy to deal damage and it all comes down to the same process which is avoid and strike with not much room to do anything else unique to take down your foes.

The puzzles are the main focus of the game which will have you on your toes thinking to solve them. Clearing these puzzles are what allow you to progress to the next rooms in the area you’re exploring. These puzzles are just the right difficulty, they don’t feel so impossible to solve to where you need to look up all the answers but also not easy enough for them to feel insignificant where you can just breeze through.

There are areas in the overworld that will lead you to an extra room with a puzzle that’s more difficult than the others. If you clear one of these puzzles, you will be awarded a chest that gives you a card. These cards show information on the different characters you come across in your adventure, however that’s all they do. They do not grant you anything special and the game tells you that they are merely there for flavor and for anyone who wants to try and collect them, so you can skip past these if you feel they are too difficult or not worth it and clear the game just fine.

The game has a very nice and simple hand-drawn cartoon style to it. It gives the game a nice charm and allows the characters to be extra expressive throughout. The music is fine, it isn’t bad or annoying which is great! It also isn’t that memorable though, but it is still pleasant to hear as you play through your adventure.

Ittle Dew is a charming game that will keep you occupied for a few hours, its puzzles are fun and engaging and the characters are likable. The world is also nice to explore, easily accessible to people and fun to play through. It does a good job of balancing the difficulty between not too hard and not too easy. The combat could be more fleshed out but it’s still fun to fight enemies and the bosses to try and figure out their patterns. Finding out when you should strike is overall enjoyable too but it can get repetitive. You might find yourself avoiding the enemies instead or going into autopilot to swing at them when you can.