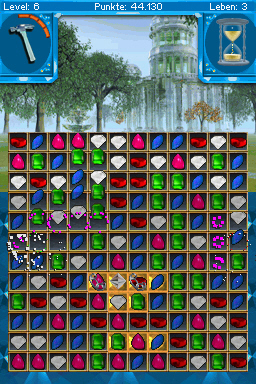 GAMEPLAY:
This is the classic match-three game where the basic idea is to swap the jewels of the board to create sets of three or more. The difference with Jewel Match 3, already reviewed here, is that it doesn’t mix other genres in a strange way and it isn’t a boring experience with an overused story.

The main idea of the game is to beat levels and to do so you need to destroy every tile in the background. It can be a gold or silver color. The main mode has a time limit and the less time used to beat the level, the higher your score will be.

You can control the game with the stylus all the time and the controls are well done. When you’re playing, pressing L/R will allow you to use your hammer and pressing the start button will pause the game.

There’s a list of different elements in the game, most of them will unlock with the time, not being available from level one: 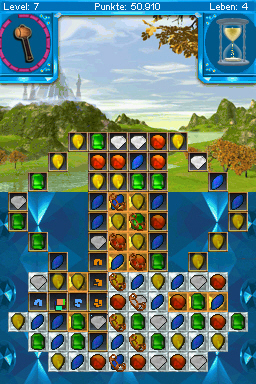 The game offers a nice quantity of levels, 150 to be exact. You can also create up to four profiles, but this is mostly a good idea if you share your console with someone. The only way to replay a level when you’re playing is using the multiplayer mode because if you start the other two modes of the game, the only options available are “new game” and “continue”.

While the game is well done and it offers a good quality for a DSi game, I must mention that the jewel genre is over-saturated, not only on mobiles but also in DSi and 3DS eShops, making the game less appealing to users. 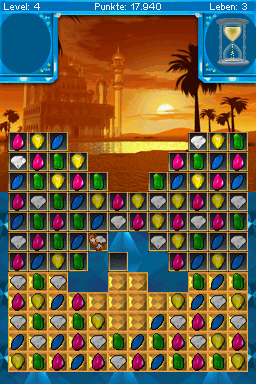 GRAPHICS & AUDIO:
The game looks nice being a DSi Ware game but it could have been a little better in some aspects. A nice touch present in the game is that the jewels have an animation which is not present in some jewel games for the DSi.

The audio is relaxing but you will get tired eventually. There are audio options, so you can hear your music when playing. The sound effects of the game are good but limited, also the quality of the sound and the music isn’t the best on DSi Ware.

PRESENTATION:
The game has a nice presentation. It offers four profiles to carry your progress, a good explanation of the game, a nice tutorial, and the levels offer a design variation. You can also set the volume of the sound and the music which is a feature not present in all DSi Ware games.

It also fails in some aspects: the multiplayer is on the same console, you can replay a level when you’re playing the game unless you use the multiplayer mode and the quality of the sound used.

CONCLUSION:
It’s a good jewel game for the DSi Ware, even when it’s over-saturated, it’s a good option for those who like jewel games or if you’re just a causal gamer. It isn’t a must have, but it’ one of the best options if you’re searching for a match-three game. It also offers a nice quantity of levels for $4.99 (500 Nintendo Points).