With the Nintendo DS’ advent in 2004, we assisted in the birth of many innovative IPs, one of them being Professor Layton. These Puzzle-Adventure games represent the conjunction between engaging stories and brain-teasing puzzles. Layton’s Mystery Journey: Katrielle and the Millionaire Conspiracy is the latest as of writing and it changes its focus from the titular professor to his peppy daughter Katrielle.

Katrielle Layton has just opened her Detective Agency in London and her first case isn’t a simple one. A talking Basset Hound, whom she gave the unprompted name of Sherl O.C. Kholmes, asks for her help in order to retrieve his memory. From this point onward, Katrielle will have to solve a plethora of different cases. From trivial things like a missing pet to more important ones like the disappearance of one of Big Ben’s hands, she will use her guts and cunning instinct to solve them all. 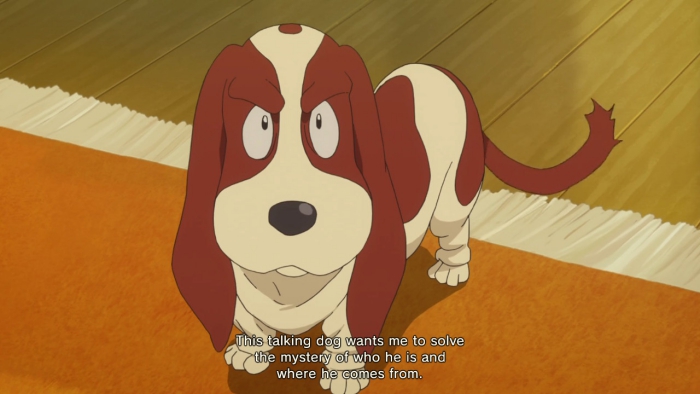 Obviously, she isn’t alone in her investigations. Her self-proclaimed assistant Ernest and Sherl himself will always be at her side. Other than them, a colorful cast accompanies Kat’s investigations, from the dense Inspector Hastings to the profiler extraordinaire Emiliana Perfetti, the arch-rival of Katrielle in solving cases. To fans’ delight, some characters from previous Layton games make their return such as Granny Riddleton and Stachenscarfen.

The writing – and therefore the localization – quality is always pretty high. Each character has their own distinct attitude and way to speak that are maintained constant during the whole game. There are puns and gags in abundance. The player can’t but have a good chuckle every time they come across these crazy situations. Writing alone is what saves an otherwise unremarkable story. The game’s plot, especially when compared to previous episodes, is in fact rather simplistic. Cases are, for the most part, self-contained and their conclusions more often than not appear a bit far fetched or unrealistic.

The point-and-click sequences follow standard adventure games’ tropes. Each case consists of static scenes and the player can move between them thanks to a simple map, immediately accessible by the press of a button. In each scene, the player will move a cursor, shaped like a magnifying lens. If an object or character can be interacted with, the lens will color orange. Sometimes the game will prompt the player to zoom on certain elements, but that seldom happens during the game.

Other than moving the analog stick, it’s possible to use the joy-con like a pointer when on TV mode or the touch screen when in portable mode. It’s a bit difficult to move the screen using the touch screen since often the little point of interest and the pointer itself will be hidden under our own finger or pen. 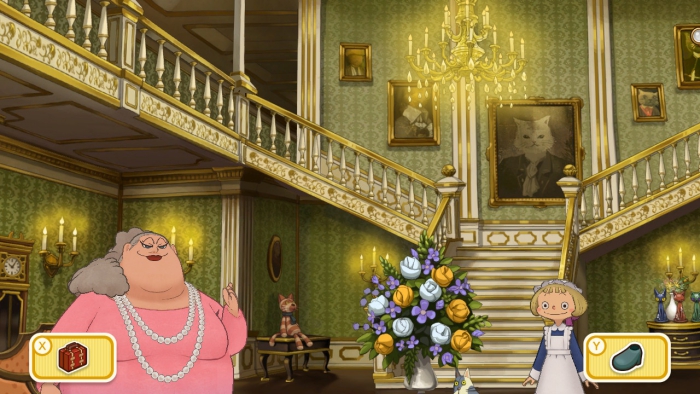 While investigating, the player can find Hint Coins, Fashion Farthings or Collectibles, random objects accompanied by a brief, funny description. Supporting characters will often comment on interactive items. While some of them aren’t necessary to the game’s progression, they provide flavorful descriptions or entertaining skits. In this way, the player won’t feel the need to simply rush through the game to advance the plot or unlock the next puzzle, but they will feel compelled to click and check everything.

Puzzles are the trademark of the Professor Layton series. In classic adventure games, developers always try to insert puzzles into the game world in the most seamless way possible. Activating levers, pushing buttons or using and combining specific items on specific points have to seem natural and not a gimmick out of place. The Layton series follows a totally opposite direction and presents riddles in the same way the player would find them in a puzzle magazine.

Some characters will challenge Katrielle and co. to solve them, other times, the player will find them hidden in unassuming objects. They range from logical puzzles to mathematic ones, word plays and other classic puzzles normally found in video games, like sliding boxes to make a path or connecting pipes. 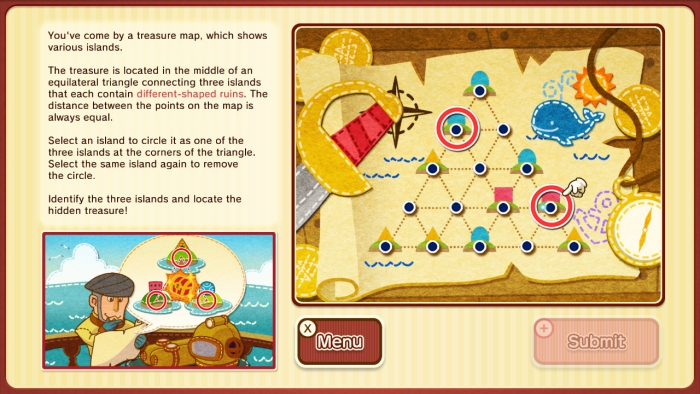 Each puzzle has a Picarats prize to give to the players. It decreases every time they get the answer wrong so that they are incentivized to think thoroughly before answering and not to rely on trial-and-error too much. It’s to notice how pen and paper are necessary to solve the puzzles since the game doesn’t offer any notes or sketching functions. While this isn’t a great issue while on TV mode, it might be impractical for people who mostly rely on portable mode, especially if they wanted to play outside.

Puzzles are diversified enough to entertain and interest the player without dragging on or feeling trite. The main issue puzzles seem to have is related to how they are often explained in a tricky and unclear way. Sometimes the real challenge is getting to know what the game wants you to find other than actually solving them.

After talking to certain characters or interacting with certain elements, Katrielle will find a Clue to make her case move forward. Each clue has a peculiar shape and when they are put together they will form a specific image, related to the case’s central theme. Each case has six clues to find. When the player collects every one of them, Katrielle can close the case. 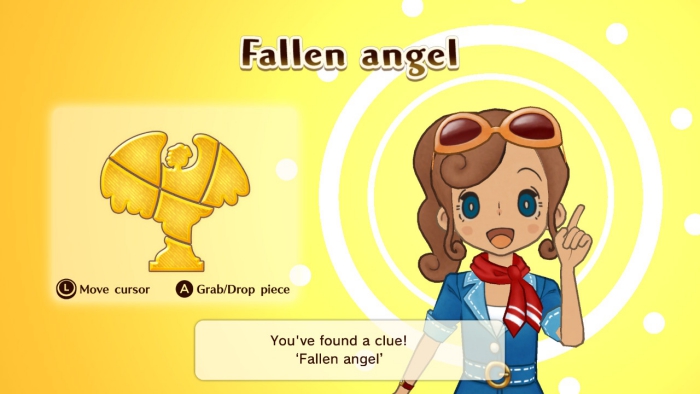 As said, cases are pretty formulaic in their structure. Like in any full-fledged mystery novel, Katrielle will gather all the involved characters and explain the mystery’s solution, other than exposing the eventual culprit. A brief animated clip will play to represent this climactic moment and the game will also show a few CGs that represent some post-Case events.

Despite this repetitive structure, the player will always be eager to reach the case ending, thanks to the videos’ high production values and the funny following scenes.

If there’s something that any player will surely enjoy in their games, that is cosmetic personalization. And Layton’s Mystery Journey has plenty of it. It’s possible to change Katrielle’s and Sherl’s appearances with a myriad of different outfits, with some of them nodding to previous Layton games. The player can buy a new outfit with Fashion Farthings. For people who do not want to search for them or are stuck on a particular puzzle and cannot proceed, a small amount of them is donated daily to the player. Except for a limited number of outfits that will be available with game progression, any other one can be bought from the start. 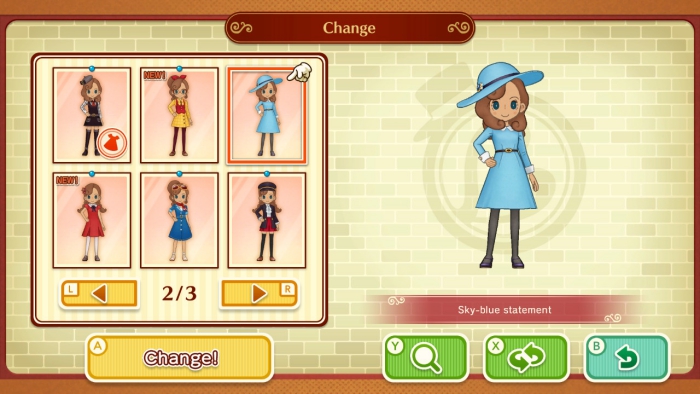 But customization doesn’t end here. For all interior design enthusiasts, there’s also the possibility to alter the Layton Investigating Agency’s appearance. Each piece of furniture can be bought with a Decor Docket. This time, personalization is related to the game progression, since the player will receive a Decor Docket every time they solve five puzzles.

During the course of the game, the player will unlock three different minigames. 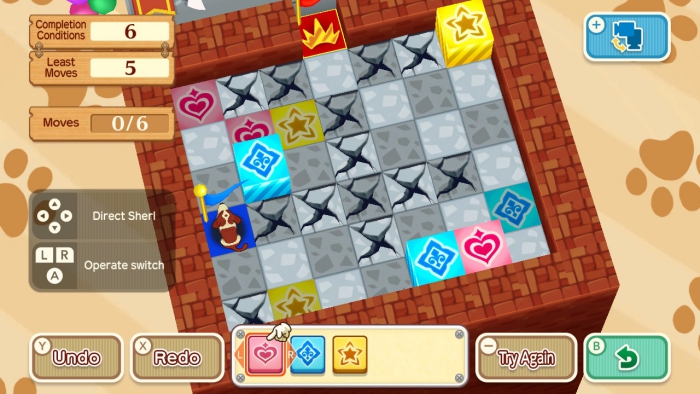 Minigames represent a nice diversion to the game’s overall progression. They aren’t particularly complex, except for Ideal Meal that rely too much on trial and error. They are not available from the start but will be unlocked progressively by completing certain puzzles. A player who particularly enjoys them might want more and see this as a shortcoming, but in this way, it’s impossible to feel overwhelmed by this optional content.

The game tries hard enough to remove any feeling of frustration from the player. While exploring, an exclamation mark on the map always points out where to go. The game even suggests what the player has to do while they examine a scene. While the handholding might feel a bit much for adventure enthusiasts, it isn’t extremely intrusive and it’s easy to ignore it.

Stuck on a puzzle? No problem, since Hint Coins come once again to our rescue. Each puzzle has four unlockable hints. Every tip costs only one coin and the last one a whopping… two coins. There is an overabundance of coins, so the player won’t feel pressed to search for them that often. While the first hint gives a simple suggestion about the puzzle to put the player on the right track, the other hints are usually a straight-up guide to solving the riddle, especially the last one that basically gives the solution. While to some this might feel like cheating, it’s a good help to the players that might be stuck on a puzzle for a long time and doesn’t force them to consult external resources.

The art style is consistent with the previous episodes. Characters have unique and stylized designs, with either rotund or extremely sharp lines. Every point-and-click scene is rich in detail and consistent in style. While backgrounds are 2D, characters are rendered in simple, but pleasant to the eyes, 3D models. 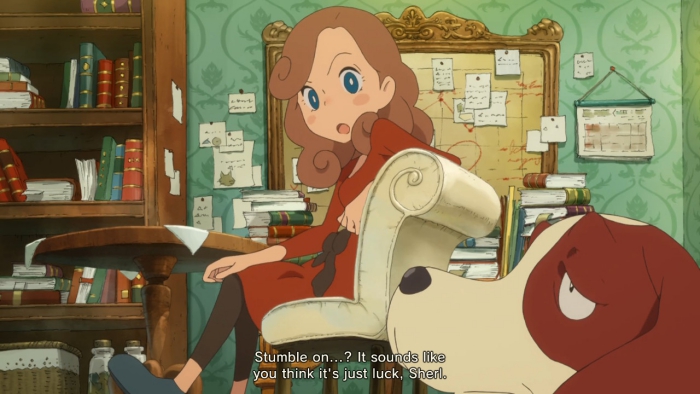 The soundtrack accompanies well the game’s tones and isn’t intrusive at all. While it isn’t remarkable on its own, it gets the job done. The title also sports a competent English dub, even though only a few lines of dialogues, other than the animated scenes, are voiced.

With almost 200 puzzles for the main campaign, the game is packed with content. Around 15 hours will be necessary to beat the main game. There are no missables and the player can revisit previous cases whenever they want. They might even find new puzzles to solve. Therefore, exploring previous chapters again is incentivized and welcomed. The player might even want to solve as many puzzles as possible since with enough Picarats, it is possible to buy insightful content from the Bonus Menu. 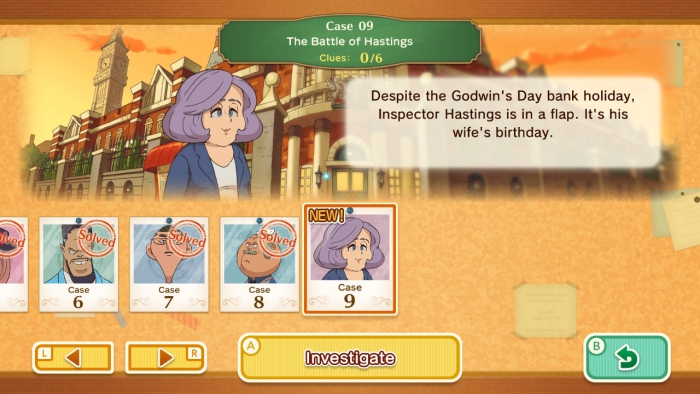 Other than that, there are downloadable puzzles. The game will start with around twenty of them, but it’s possible to download a new one every day. These riddles reward players with Museum Points that are used to unlock previous games’ info and extras in the Layton Museum menu. Thanks to them, the player will feel compelled to open the game every now and then to see which new puzzles are available.

While the latest chapter in the Professor Layton’s series is a weak title compared to the previous entries, it’s a competent game on its own. It sports so much content that the player can get much entertainment from it. Its charm and cutesy often compensate for the simple and predictable plot. The customization options are also a welcome addition.

People who already played the game in one of its previous iterations might not find many incentives to play it again. On the other hand, newcomers can get this version to experience the definitive edition of this title, packed with more puzzles, better graphics and the possibility to play it on a big screen.

A good, but not great, game for Professor Layton and puzzles fans.