Becoming a champion is the dream of every trainer in a world where monsters fight for glory. Setting out on a journey is just the beginning. Collecting and training are where trainers must put their heart into it. Pokemon games are known for training and catching ’em all. The formula rarely changes and the same can be said about Pokemon Sword and Pokemon Shield.

As a new Pokemon trainer, you will begin your adventure by traveling around the Galar region, catching Pokemon, defeating gym leaders and trying to become the champion. The story isn’t that different from the previous Pokemon games and it’s not too difficult to guess the villain.

No voice acting during important cutscenes is a missed opportunity as well.

As your adventure begins, you will find yourself traveling through routes and visiting towns/cities. During the journey, you will encounter a variety of Pokemon. From wild Pokemon that chase you to Pokemon by trainers who are itching for a battle. Wild Pokemon are shown on the overworld, making it possible to dodge their encounters while some trainers will not let you off as easy. While it’s possible to avoid wild Pokemon, the game does not always make it easy as there are some areas filled with them and some Pokemon emerge out of the ground or water.

Character customization is available in the form of changing clothes and hairstyles. The skin tone is chosen at the beginning of the game. Clothing and hairstyle shops can be found in towns/cities allowing players to change their clothes and hairstyle. The variety is large so players will feel right at home when customizing their character’s look. Both males and females have a lot of options to choose from. This time the options for males compete with the options available for females. It may even be possible to go as far as matching the character’s appearance with yourself.

Dressing in fashionable clothing isn’t cheap though. Going crazy clothes shopping will drastically hurt your wallet. This makes the game more challenging and sets the player with a money-making mindset so they search more for valuable items and trainers to battle against.

The bike uniform does not have multiple designs although its colors can be changed. It’s a bit limiting but it’s better than having a permanent color you dislike or doesn’t fit with the uniform design.

Traveling Through The Game

Flying on that Noctowl or surfing on a Lapras is no longer possible. Don’t worry because there are alternatives in Sword and Shield that can be used to get your way around the Galar region with ease. And they are great alternatives too.

Riding a bike feels the smoothest it’s ever been in a Pokemon game. It isn’t the fastest but there are boosts that can be purchased, however, they are not cheap. More worthy items might make better use out of the currency, forcing you to grind more for it if you want the best of both worlds.

Getting lost in the world will be the last thing on your mind. There’s always guidance informing players of where next to go. Missing the dialogue isn’t a problem either. Opening the main menu will notify you of what next to do and the map will mark the location to go.

The Wild Area is a stretch of land of the Galar region dedicated to searching for Pokemon and catching them. There is a variety of Pokemon, including Dens where you can find Dynamax or Gigantamax Pokemon. A lack of gym badges can prevent you from catching over-leveled Pokemon and the weather affects some encounters. Due to this, you will often find yourself revisiting the area to catch them with each new badge you obtain and change in weather. The variety of wild Pokemon is large enough where you may miss several of them or new areas would become accessible as you progress through the story.

Connecting to the Internet in the area lets you see other players travel across the land. You can team up with them in Dens or fill the empty slots with NPCs. They also give you a free item when interacting with them. The game lags a lot with a large number of players in one area. It reaches the point of being annoyingly noticeable at times. This is the only downfall when playing online in the Wild Area.

Pokemon battles follow the traditional turn-based strategic combat it’s known for like in the previous mainline Pokemon games. Some of the mechanics found in past games such as mega evolution, Z moves, and horde encounters were not carried over to the new titles. 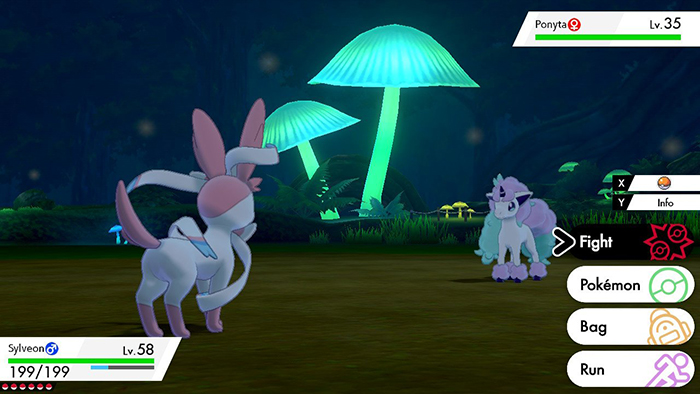 With a fresh set of Pokemon faces, new moves and a new Pokemon transformation mechanic, it slightly changes how the game is played. The Dynamax or Gigantamax transformations feel like a combination of mega evolution and Z moves without the bang, balancing it out to prevent it from being game-breaking. With a couple of new moves and no Pokemon type additions, there is little new to learn.

Winning a battle rewards all Pokemon in your party with EXP so they level up faster together. This makes grinding less of a pain for those who train weaker Pokemon for their team. A majority of the battles are generally easy. Teams lacking type coverage can prolong battles.

Got To Catch ’em All

Catching Pokemon might be the most challenging part of the game. Some Pokemon do not just roll over and let you catch them. They resist and find ways to make catching them even more difficult. From recovering their HP to self-destructing on themselves. Wild Pokemon are even capable of defeating your entire party while you’re occupied with throwing various poke balls hoping for the best. 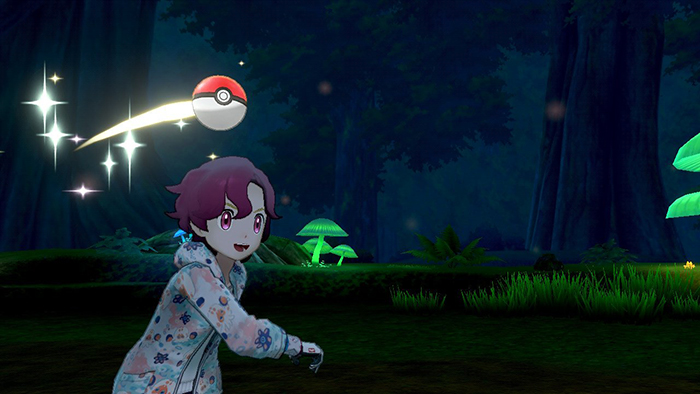 It’s a thrilling experience to be had counting down on the three strikes for capture. It’s a shame how some of the best Pokemon have been cut from the game, however, there is still a great quantity available. It may even get players to try new Pokemon on their team that they haven’t before.

Pokemon PC boxes can now be accessed anywhere in the world. It makes it much more convenient to check the nature, ability and other stats of recently caught wild Pokemon instead of having to wait and visit a Pokemon Center every time.

Pokemon Sword and Pokemon Shield spice up Gyms a bit with Missions. It’s similar to the little puzzles seen in the previous games but a lot better. The Sword and Shield missions started excellently but the light, unfortunately, faded near the end. If more unique ideas were added as seen in the beginning gyms, it would have kept the excitement going.

Pokemon Sword and Pokemon Shield are basically the same game with some differences.

The graphics aren’t bad but they aren’t magnificent either. Some areas are beautiful to admire. Some objects have a slight blur and aren’t too detailed. Rocks and trees in the Wild Area have a visible dot and line graphical anomaly. Rarely during a battle, some Pokemon’s sides may seem blurred when moving during the standby phase where you select moves. So there are the good and the bad.

With that said, battles do look spectacular. The stronger the move, the better it looks when used. Character and Pokemon models do look great as well. Dynamax transformations are presented nicely with their intimidating sound effects. The game has come a long way since its public demo to the point Dynamax transformations don’t just instantly appear and disappear on the battlefield.

The soundtrack is good. The Stadium battle song is the most noteworthy. It makes you feel as though you’re in an actual stadium watching an important match, filling your body with energy and excitement. The villain theme tries to send chills down your spine and give off a sinister atmosphere. Others range from good to relaxing to tolerable.

Battling and trading online have their own ups and downs.

There is no point at the player, click and send request type of system available in these games. A Link Code is forced upon players whether they like it or not to communicate with specific players in either. If one isn’t set, only random players from around the world will answer the battle/trade requests. Even if two people who know each other try to search for a trading partner without a Link Code at the same time, it will be unsuccessful due to the high volume of players using the service. Sometimes even when setting a Link Code, a random player could set the same as yours and still enter your battle/trade. Higher chances exist if common Link Codes are used. With the high number of players using online, sometimes an uncommon code will result in a random player getting lucky.

On the bright side, this approach eliminates going through the trouble of suspending your game just to add someone to your Nintendo Switch friend list. Meeting a trade partner from an online community means instantly exchanging Link Codes and quickly trading over Wi-Fi.

Max Raids are how players battle against oversized Pokemon in the wild. An online co-op mode exists where four players from around the world can battle this enormous monster together. Even though it’s a great addition to online play, finding a max raid can be stressful. The game fails to properly inform players about how it works, resulting in a lack of players and max raids to try out. Although NPCs can fill in the empty player slots, most are downright horrible at battling and sometimes make you want to pull some strands of hair out of your head. That aside, it’s also irritating how some max raids are not available to join while they still appear on the seeking list, even when refreshing it.

There isn’t a lot of post-game content although it’s still nice to have the additional story of what comes after. The battles are a bit more difficult but nothing too extreme a good team will struggle at handling.

Along with it is the Battle Tower as seen in most of the recent mainline Pokemon titles. It lacks leaders which is disappointing but it rewards players with a new currency that can be exchanged for useful items for competitive matches against online players.

It’s not uncommon to assume a majority of your Pokemon in your party will have high levels after finishing the game’s story. The game keeps this in mind and heightens the level of wild Pokemon found in the Wild Area so one move does not automatically end the battle. This maintains the strategy of weakening Pokemon to catch them easier with a pokeball.

Pokemon Sword/Shield may lack a great story but it’s still fun to play together with friends while sharing achievements along the way. A majority of the time spent playing will be searching for Pokemon and filling out the Pokedex as the story feels as if it can be easily breezed through. Online features could have been incorporated better but still tolerable. While the game has its shortcomings, it’s still an enjoyable adventure to be had. The Wild Area alone will help make it worth your while.

Pokemon Sword and Pokemon Shield get a 7/10.

Gervais is a Nintendo fan who loves to play a good game. His first owned Nintendo console was the NES, and he currently owns a blue 3DS XL.