No matter what you are, no matter where you are, I am convinced that – unless you are a serial killer or other such individual who has no light behind their eyes – you have, in your heart of hearts, a ten-year-old girl’s dream: to retire from this terrible world of technology, and live in a charming British village, doing nothing except raising lots of animals that love you and stepping out from your pleasant bubble only to shop for yours pets’ needs. I do, at least, which is why I have to – I mean, get to, review pet sims.

The target audience for such games is, of course, an incarnation of aforementioned ten-year-old girl. TREVA Entertainment GmbH have, at any rate, perfectly represented this little girl and how she sees life in their newest pet sim, Me & My Pets 3D – pink shirt, Barbie-ish plastic-like sheen on her skin, and a voice that says things like, “Fine!” while grooming her pets, with such convincingly fake enthusiasm that only a ten-year-old pet-obsessed girl can muster. (Convincingly fake, I said.)

Me & My Pets 3D turns the pet-keeping dream into a stress-filled, frustration-fueled nightmare. 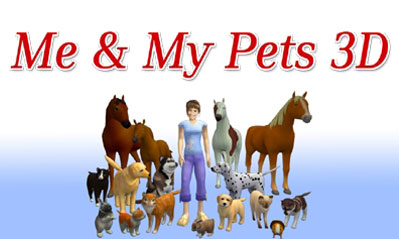 You play as this little girl with big dreams, who wins a pet hotel through a contest held by a television station hoping to repeat the success story of a small-time pet hotel becoming big-time, by handing a substantial amount of land over to a ten-year-old.

Having played through several pet sims in my time, I kind of expected not to have my hand held in this handheld game at all, because pet sims usually leave that up to you due to either rushed development or a mistaken assumption that figuring things out by running amok and wasting time in the process is therapeutic. Me & My Pets 3D did not disappoint me. There is no tutorial whatsoever, and the digital manual couldn’t possibly have been more unhelpful. Eventually, I was able to figure things out by simply trying every menu option I came across. You are given 17 tasks to complete in the first chapter, and the first task that you have to do to get this game on the track of being playable is setting up a rabbit pen. Oh, you have to choose the Expansion option in your little girl character’s ‘office.’ Oh, you have to wait until the next day for the pen to be created, which the game declines to mention when you choose to have it built (there is no confirmation that it will be built at all, as confirming that you want to have it built just sends you back to the gameplay. This will encourage children to go on faith, I suppose). Oh, you can’t go to bed for the day to end until the in-game clock says 12:00. After a shopping trip for the as-of-yet nonexistent rabbits’ food supplies and running around pointlessly, the clock said 12:00 and it became possible for the in-game day to come to an end.

And in case you’re wondering, nowhere in-game did it say that you have to wait until 12:00 for you to be able to select the ‘Finish day’ option. You’re simply not allowed to choose that option until then. 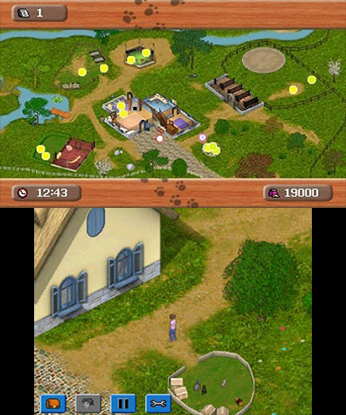 You can exit your pet hotel and go into town to shop for items, and surprisingly the town actually boasts a decent level of detail. There aren’t people bustling around or anything, but there’s a statue and some additional buildings. Your pet hotel looks fine as well, once all the pens have been set up. The environments in Me & My Pets 3D, if that’s what you can call them, are fine. The game plays from an isometric point of view, like the Age of Empires titles. You have to walk around in the game a lot, because you can’t simply select where to go. In all honesty it looks like a 1990s’ PC game, and the animations have such few frames (especially when riding horses) that they don’t look like convincing movements at all.

After setting your hotel up, customers come and walk all the way into your house, and then into your office, and only then can you talk to them. They give an excuse for giving their pet away to your hotel, such as ‘our rabbit can’t cope with the preparations for my brother’s wedding’, specify the number of days in which they’ll be back, and go off. Take good care of their pet, and you get paid well. If not, then the animal might fall sick, the vet will have to be summoned (and paid) and if you still neglect your animals, the authorities might come knocking.

You can change your character’s avatar to your own picture, in case you are the ten-year-old this game is looking for. You can take a photo of yourself using the inner camera of the 3DS. You can’t switch to the outer camera to take a picture of anything else, like an image of a character that you want to use as your avatar (after lots of struggles, I succeeded in doing so with the inner camera). What’s worse is that for some reason the girl’s shirt stays in the picture, with the assumption that you position your head so that it looks like you’re wearing that shirt. This is a very difficult thing to do, because of how much of the image the shirt part actually takes up.

You can buy items online in-game using the computer in your character’s ‘office’, and can exchange Play Coins for in-game money. The latter is one of the very few original ideas I have seen in pet simulators, so the game deserves a little bit of praise for that.

So much for the running-around part of this game. Let’s see how well the games does in terms of you interacting with pets. The game aims to be an all-in-one simulator for birds, fish, cats, dogs, horses and rodents. 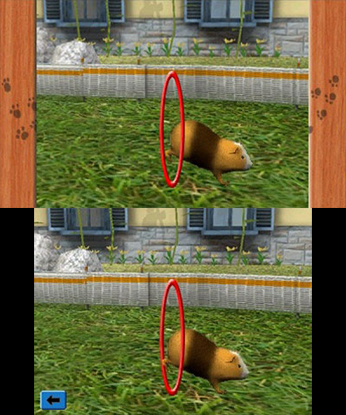 First of all, you might want to clean your pet’s pen to assure their hygiene, as it is one of their needs along with food (Appetite), exercise, comfort, luxury and company. You choose between ‘Standard’, ‘Thorough’ and ‘Shiny’ kinds of cleaning, and the only difference between these that I could notice was that ‘Shiny’ makes the pen cleaner (according to the bar – no change in visuals, EVER) and has you watch an animation of your character cleaning for a few seconds longer – there is no direct interaction in cleaning.

You can feed your pet, but first you have to go to your house and put the food in your Foodbag by dragging icons from A to B. You can only carry six items of food at a time. There are three kinds of food, ‘Standard’, ‘Good’ and ‘Special.’ You can also feed them tidbits, which are unlimited and still fulfill their appetites. You can play games with your pet for exercise, and groom them to make sure they’re clean, and pet them to ensure their happiness.

Unfortunately, for its few original ideas in the part of the game that doesn’t involve pet interaction, Me & My Pets 3D is terrible, no, downright abysmal as a pet simulator. First of all, the pets are pre-rendered in 2D, and since their animations are always exactly the same, they feel like inanimate objects. The few animations are recycled too – for example, playing the ‘Beg’ game with the rabbits has them play the feeding animation over and over again, the same way. Their behaviour doesn’t feel natural at all, when natural-looking behaviour is something pet sims should aim to accomplish to at least some small degree. The animations are discontinuous too – playing the ‘Circuit’ game with rabbits, they stop and go again at their starting point instead of moving continuously, because the animation is a 2D pre-rendered horror that is triggered by moving the stylus anywhere near the centre of the screen, despite the idea being that you move the stylus in circles.

All in all, caring for the pets just doesn’t feel fun, and you don’t even know if anything you do is affecting them or not -for example, there’s no ‘dust coming off’ or such effect while cleaning them. While petting them, you move the stylus over them while they do the same animation over and over again like a .GIF image, and there’s no indication that they’re being petted or not unless you enable the ‘Needs’ HUD and keep an eye on the upper screen, which shows the same thing as the touch screen.

Although a pop-out 3D effect would have been nice, especially since ‘3D’ is in the title, there is almost no 3D effect in the game. The HUD objects might feel like they’re a little above the rest if you turn the 3D slider all the way up – but the 3D effect barely feels like it’s there.

There is an additional ‘Riding Out’ mode in which you ride horses and make them jump fences just for the heck of it, and it disables the Circle Pad for some reason, even though the Circle Pad was perfect for letting players control trotting and galloping. No dice. Instead, you’re left to mess around with the stylus on the touch screen.

The soundtrack, which has only one song for each of the Normal and Riding Out modes, is upbeat and at a relatively fast tempo compared to most pet sims, which have slow, relaxing music. It isn’t particularly bad, even if the vocal instrumental singing is embarrassing if you’re playing the game with someone else in the room. There is also some voice acting, which most pet sims don’t have, which is slightly cool. Unfortunately, the developers traded voice acting for pet noises – your pets, which feel inanimate or, perhaps, undead when you look at them, don’t make any sounds at all either.

There’s no real reason to play Me & My Pets 3D, especially when it’s so terribly overpriced. Although it could have been a good game, the pet interaction in the game gets a zero out of ten, with pre-rendered animals, no pet sounds at all and altogether unnatural behaviour. There’s no fun to be had while caring for the animals. The manual tells you to prepare for ‘back-breaking work’ (aren’t pet sims supposed to be relaxing?) and it delivers exactly that if you decide to stick with it. Ask yourself: would you ever pay to do something that feels like work you don’t enjoy? I would hazard a guess that the answer is no. Even the ten-year-old pink-shirt-donning girl this game is aimed at probably won’t have the patience for it. TREVA have published some great pet sims in the past, such as Let’s Ride: Best in Breed 3D, but this time around they’ve gone completely wrong.