Shin Megami Tensei IV has a quest called, Phantom of Madness. To complete the quest, you will be required to find and slay four hordes of demon that are wandering around Shinjuku. Chernobog will appear after you defeat the last horde of demons, so be prepared to fight a powerful foe that has the ability to eliminate your entire party.

They appear at random locations in Shinjuku, however, I encountered my first horde at the East Entrance Main Street of Shinjuku. After defeating the first horde of demons, the mapper app will pick up the locations of the reminding hordes, making it easier to complete the quest.

I found the last horde and Chernobog at ‘Shinjuku – Golden Gai’. Take note, after a certain time period, the pink symbol that represents the enemy in the game will disappear and reappear at a different location of Shinjuku. The horde of demons don’t go too far and they’re really easy to find. They’re all at Shinjuku, you know.

What is Chernobog’s weakness and how to beat him 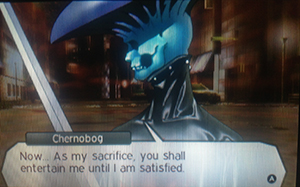 As I mentioned earlier, Chernobog is the last demon to fight for the quest after defeating the last horde of demons. He appears as reinforcements, therefore, it is recommended not to give the horde of demons a chance to lower your team’s HP.

Getting down to business. I have failed at finding Chernobog’s weakness. I tried almost every attack element in the game and yet Chernobog stood strong. I assume you will lose a turn if you use a dark element skill because of his nature. However, that’s only a guess.

Be careful when battling Chernobog. He knows a physical attack that hits all enemies that has the possibility of inflicting the poison status. I managed to defeat him by using demons with around 300 to 400 HP, while using skills that greatly healed my team (eg. Mediarama).