Resident Evil: The Mercenaries 3D was one of the earliest major releases for the 3DS that wasn’t a launch game. For those who don’t know, the Mercenaries first appeared as a score-attack bonus mode in Resident Evil 4. It made mockery of the notion that killing zombies should always be draggy-slow and deathly-quiet. In it, you selected characters with preset inventories, and proceeded to kill as many Ganados as you could before time ran out.

Resident Evil: The Mercenaries 3D is basically what would have happened if the Mercenaries modes from Resident Evil 4 and Resident Evil 5 were thrown into a blender on high setting and then hastily shoveled into a Nintendo 3DS cartridge: a mixture of the modes in those two games, fun to play, but ultimately still messy.

Obviously to hunt zombies you have to select one of eight characters, and right here Mercenaries 3D runs into one of its problems, before the gameplay even starts. While longtime series characters such as Chris and Jill are here, and others like Claire Redfield can be unlocked, Leon Kennedy has for no obvious reason been omitted from the game. I cannot for the life of me see why Capcom thought of this as a matter that they could just overlook, when Leon is one of, if not the most, popular characters in the franchise. Given how little content there already was, the unexplained omission of a series favourite is one of the choices Capcom made that make no sense. But it’s not the only bad decision on Capcom’s part, as we’ll see later on. 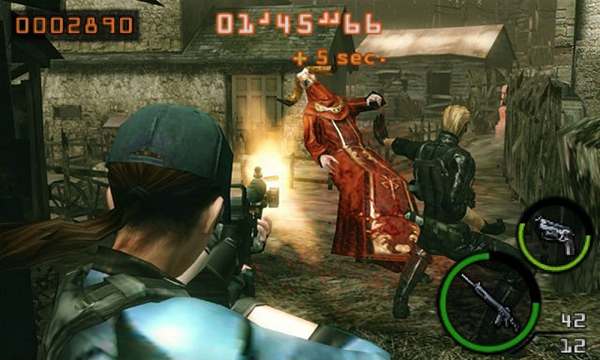 The gameplay is pretty much the same over-the-shoulder action from the console games, with a few new additions. The basic gameplay is that you run amok in the map you select, killing as many enemies as you can before time runs out. Headshots earn you more points, as do quickly killing enemies in a row or killing stronger enemies. You earn bonus time by breaking time crystals or killing important enemies. The new additions in this game are strafing, first-person aiming and a skill system. While aiming, you can hold the L button to strafe, but by doing so you can’t aim while moving. First-person aiming changes the perspective to first-person view when you aim, which supposedly should make aiming easier but is in reality rather problematic for players who are used to over-the-shoulder aiming, so you should just stick with that.

Your characters have three skill slots each in which you can assign skills that level up with use. They improve weapon stats such as accuracy and handling, and other skills have different effects such as making health items more effective, but that’s about it. The skill system may have been fun if implemented well, but sadly it feels like an afterthought and the game wouldn’t be really that different without it.

Online multiplayer, alongside local play, is included in this game and is actually quite an enjoyable feature, though it has more than a fair share of glitches. Enemies sometimes get stuck in an animation become invincible during online play, and no amount of shooting kills them off, which is a very annoying bug. It lags as well sometimes, and if your Internet connection isn’t very strong occasionally entire loading screens pop up during play. Wading through the menus to get everything sorted out before heading out, as you can’t adjust everything while in the lobby, is a small frustration. Still, online multiplayer is fun despite the minimal communication – only four voice prompts – the game allows between you and your partner.

The graphics are very good. The character models are superb and at the time of the game’s release were some of the best to be on a handheld. Up close, however, especially in first person view, the models are a little blocky and the textures a little muddy. There are frame rate issues sometimes especially in online multiplayer, though most of the time the frame rate is okay. Still, most of the time the game does quite well in the graphics department. The environments look good and are nicely detailed, though admittedly they’re recycled from the previous games. The music is also quite good and the sound effects are excellent. 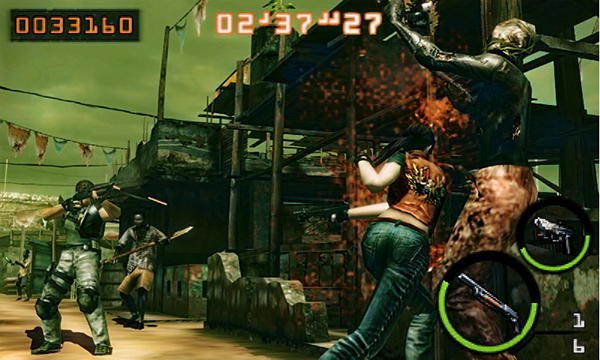 However addictive and fun, Mercenaries was still an extra mode. There is supposed to be lots of replay value in a game like this, but here again some problems mar the overall package. First of all, this is a score-attack game, yet there are no leaderboards of any sort. How hard can it be to include some sort of leaderboards in this game when even some DSiWare games have online leaderboards? It would have increased the overall value for a lot of players, yet the developers chose to forgo this aspect. Also, there just isn’t enough content in the game. There are a few unlockable characters, and an unlockable alternate costume for each character, but that’s all in the unlockable content. The Mercenaries mode that was put in as an extra in the console games had more content, against this game that cost $40 at the time of release. There are 50 ‘medals’ which are something like achievements, but they are ridiculous in the conditions you are asked to fulfill. Ever fancied getting a medal for playing through a level without using a quickturn? This game has it. It’s rather obvious this was done as a desperate attempt to increase the replay value, but it doesn’t succeed because they are so easy to complete.

In the end, Resident Evil: The Mercenaries 3D is not a bad game, but the lack of content is a real downer. The score-attack, zombie-killing gameplay is fun as heck, but the meager amount of content makes this game not worth the $40 price tag it had at the time of release. Resident Evil: Revelations, with its Raid mode, renders Mercenaries 3D all but obsolete anyway. Even though the price was dropped to $20 for the digital version on the Nintendo eShop, be sure to know what you’re getting before you buy it. And if you have any reservations about the price and value, don’t buy it and you won’t miss out on much, seeing it’s a spin-off and a rather incomplete one at that.