The best way to describe Rock Zombie is like a Hack And Slash from the old arcade machines and that’s because this title is inspired by Golden Axe, an old game from SEGA.

Rock Zombie tells the story of three witches named Zoe, Shasha and Crystal. During their presentation in a concert, green smoke appears converting everyone into zombies, forcing the witches to escape from the place. After the story, you will notice the game shares a good amount of personality, however, the characters lack a little from this element.

When you begin to play, you will find a lot of zombies you need to kill and your main objective is to survive while defending yourself. With your ultra resistant guitar, you are capable of making horizontal and vertical attacks, and thanks to the fact you are a witch, you can also use magic when you’re having problems (big attack or a shield). It’s important to take note that using magic consumes a little bar that can be re-filled by killing zombies. 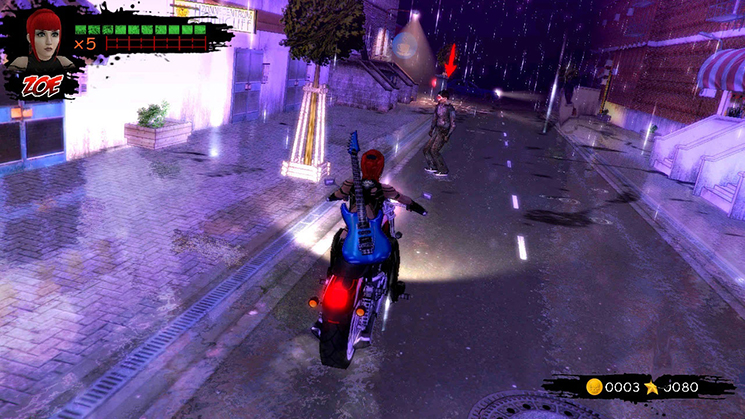 You will also need to be careful with your life because once it’s empty, you will lose a life. Losing all your lives will result in a game over screen where you can start the level over from the beginning in the first two difficulties. In the largest one, arcade 1990, there are no continues, forcing you to start from the first level instead.

There are different types of zombies you can find, some of them will be dragging themselves on the ground, some of them can be on fire (and explodes once killed) and others can puke at you. In the adventure, you will also find dogs, spiders and even zombies. During the levels you will also have some exploration where you can find items you can break, cassettes (fill your life), acetate discs (extra life), potions (fill your magic bar) and coins.

A majority of the levels work as moving from point A to point B meanwhile you kill the zombies that try to stop you from progressing. Unfortunately, the way they’ve done it causes repetition which is the only flaw of the title, however, there are two extras variations: the bosses and levels where you can drive. The bosses work in the similar manner like the rest of the levels where instead of killing a lot of enemies, you’re attacking one strong enemy with certain additional challenges.

The driving levels (first one with a bike, then with a car) you will be moving and trampling zombies, picking up coins as well as avoiding enemies. Sadly, the placement of the objects (I think it’s random) forces you to take damage during the road making you lose a life and this can be quite a problem if you’re trying not to lose lives. 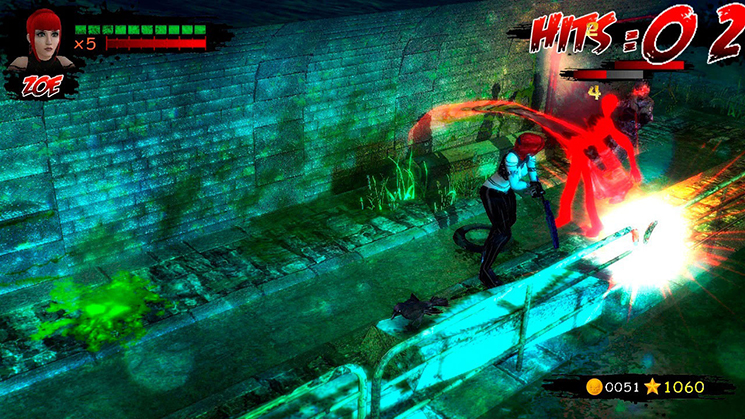 At the end of the level, you will get coins depending on your score (including the ones you got in the level). Those coins can be used in the Zombie Museum, allowing you to unlock artwork, alternative costumes, new instruments and even some figures. Still, its value can be random. There is also a total of 50 different unlockables to buy.

Rock Zombie presents a total of 21 chapters, where latter the level the higher its difficulty is in a campaign that lasts for around four hours (to complete). It sounds short, but there is replay value: you can select one of the three main characters (each girl has her own stats) and also three difficulty settings: casual, normal and arcade 1990. It doesn’t end there since you can also unlock an alternative costume and two additional guitars that will sightly change your stats.

The controls work great when using the Gamepad and off-TV mode is included which is a plus. You can also play with the Pro Controller, but if you wanted to play with a friend, yo should know that there is no co-op mode.

The soundtrack of Rock Zombie uses plenty of rock songs giving a huge use of guitars and battery, and they’re quite good despite the fact that a few songs are generic. There is also a good variety of sound effects that are satisfying, however, the little voice acting used could have been better. Visually, the title looks nice using good textures, nicely done models and a good use of effects. Some animations could have also been better, but for a $7 game, the developers did a good job. 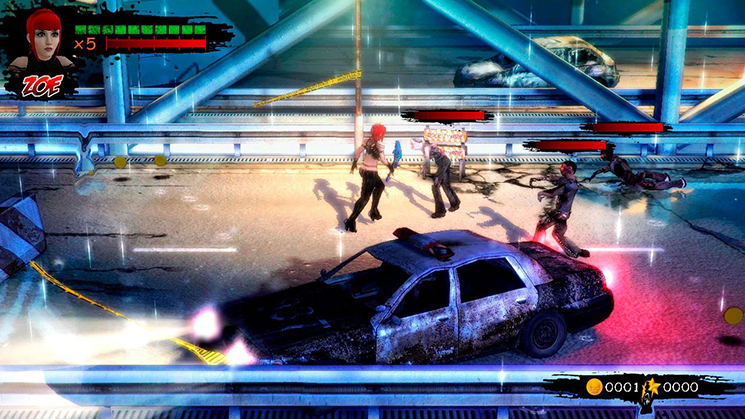 Doing companion to the story, there are 16 small comics telling the game’s story but sadly they are just rendered 3D images with some effects and low quality compression. It’s still a good touch, but nothing special about it.

The presentation is great as well and meanwhile the manual is lacking, there is support for the Pro Controller, you get a good amount of unlockables, replay value and an achievement system with plenty of objectives to complete.

Conclusion:
Rock Zombie is an interesting game making nice representation of old arcade games and also including a nice quantity of extras that makes you need some time before completing it at 100%. The only reason you should avoid this title is if you don’t like repetitive experiences.