SHUT UP BOX! I WANT TO PLAY! 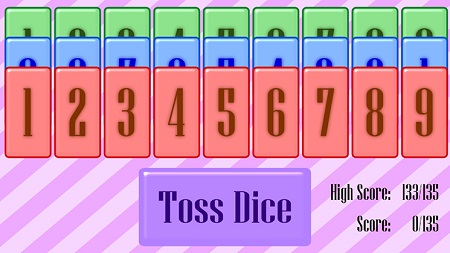 GAMEPLAY:
POKER DICE SOLITAIRE FUTURE was the first entry in the “card/casino/dice” trilogy RCMADIAX is working on, where it was simple but highly replayable. The second entry, SHUT THE BOX, follows the same objective: a simple game with a great replay value.

This time, the game’s rules are simpler: You will have three rows of tiles numbered from one to nine, where you need to remove the most tiles possible to get the highest score. How do you remove them? Toss two dices and the value you get from both dices is the total value of tiles you can remove. Removing all of them means a perfect game, where it depends on two factors: a little of strategy (or skill) and a lot of luck.

An example: you get [3] and [9] in the dices. This means a total of 12. Now, you need to remove tiles with that value, where you have different options:

The controls use the tactile screen of the Gamepad, where it works great. The game’s main feature is the replay value, where it isn’t as strong as PDSF but considering it’s half the price, it’s still an interesting option for short burst. 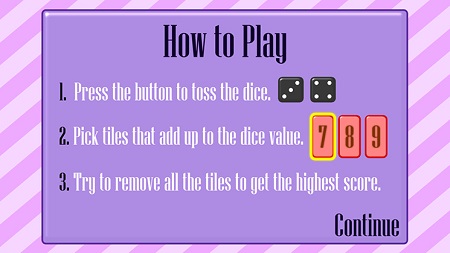 GRAPHICS & SOUND:
Like the previous RCMADIAX titles, STB features simple but nice looking graphics and one loop song as a background, where it’s relaxing until you get tired of it.

PRESENTATION:
The presentation also follows the same steps: you start the game, the logo appears and then the title menu, next you press play, the game shows the instructions and you start playing. It’s a really easy and basic interface that works well, it features replay value and the controls work great.

The only difference is that you can see your highscore, which is a good touch. It gets useless once you do a perfect game, but it’s rewarding once you see it at its maximum value.

CONCLUSION:
SHUT THE BOX follows the same steps than previous games: a simple game with a good replay value for a low price. It’s a great option for those who like the game and it’s a lot more cheaper than the actual table game.