DO YOU WANT TO DIG THE GROUND?

After the long wait, the Wii U version of SteamWorld Dig will be available this week as of writing this via eShop, introducing new elements and HD graphics. You can read the 3DS version’s review of SteamWorld Dig here if you want. 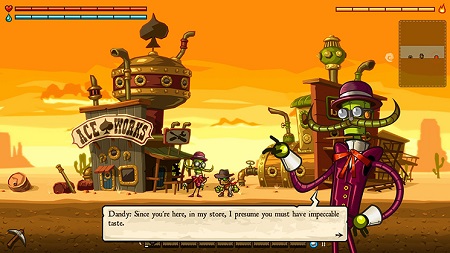 GAMEPLAY:
Dig Dug meets Metroid is the best definition of this game. If for some reason you do not know what those games are, combined together they are a mining game with platform, RPG and puzzle elements.

When you begin your journey, you will be required to use your pickaxe to dig in order to go down and you will discover minerals that you can sell for money once you go back. Money can be used to purchase upgrades that can make you stronger and capable of doing more things, and that’s basically what the game is about.

Those upgrades can make your weapons stronger, add more capacity for your main three resources (light, health and water), and can give you the ability to carry more minerals, etc. However, you can only upgrade what you have by using your money. Similar to Metroid games, you will get new elements with time. For example, this includes the drill, the speed boots or dynamite.

You can also fight enemies in the game, however, this part of the game can be extremely risky sometimes or in the worst case scenario, the chance of getting stuck is high if you progressed a lot and you may need to sacrifice yourself to continue. 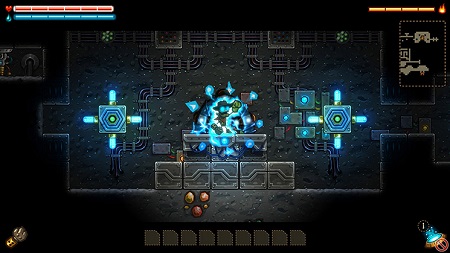 After being destroyed, you will start from the entry and you will lose all the minerals you obtained (you need to get them back) as well as half of your money. Falling rocks are also capable of destroying minerals and items, therefore you must be careful.

There are other elements that will make your adventure harder: you have a limited number of slots where you can enter one large mineral and four small minerals in each slot. The light you have also has a limit and if it runs out, you wouldn’t be able to see any of the contents underground (making it almost impossible to get minerals), therefore your best option is to go up to get more light if you happen to be running low on it.

The controls are great. It feels exactly the same as the handheld version. I would love to talk more about the gameplay aspects, however I will be spoiling the surprise this adventure wants to bring to the player (well, for those who have not played it yet). 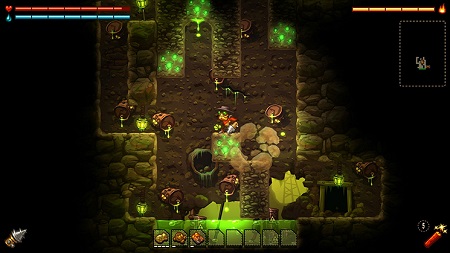 GRAPHICS AND SOUND:
The game looks wonderful on the 3DS version and it’s the same on the Wii U version as well. After playing it on 1080p, some people would consider it as a remake due to its high quality. It features a lot of details, the character’s picture is animated when talking and the artwork looks fantastic.

The only thing I disliked is the Rusty icon when you have the map on the Gamepad. It’s the only flaw that I discovered while playing the game, to be honest.

The soundtrack is pretty good where the music does not want to add a background but an atmosphere. The sound quality is sublime and the voice acting when the character speaks is in great detail as well.

PRESENTATION:
The presentation is great overall where it has a good quantity of options including six different languages, some interface customization including volume audio and brightness. There are also three different screen modes:

The only thing that I disliked is the lacking manual. I would have loved one with a steam-punk design. Still, the explanation of the game was excellently done.

SteamWorld Dig for Wii U is a ‘must have’. It’s a great option featuring good quality and replay value. Although it’s quite short, it’s one of those games that shows the quality that indies are capable of.