The ‘Sunset For A Demonnapper’ quest can be registered as a quest to complete before unlocking the area where you’re required to go to complete it. If you have not visited the Sunshine Front of Ikebukuro or defeated Xi Wangmu, you’re not going to complete it no matter how many hours you search at the locations that you have already unlocked. There is an area in ‘Ikebukuro – Sunshine Front’ that you need to exit to find Kishimojin Temple.

This guide explains more in detail about how to find Kishimojin Temple and how to complete the ‘Sunset For A Demonnapper’ quest in Shin Megami Tensei IV.

How to find Kishimojin Temple in Shin Megami Tensei IV

From there, exit to the South Entrance of Shinjuku and exit again to the Shinjuku region of Tokyo. Move your character’s symbol left, up, and then right. You should eventually come across a poisonous swarm (pink). Search for the underground tunnel and it will take you to Ikebukuro. Seek out a building by moving up and left from the tunnel, and enter.

You should now be at the Sunshine Front of Ikebukuro. Keep moving forward until you find a crack in a wall or a ladder. Go directly towards the crack in the wall or the ladder, press the down button on the Nintendo 3DS, followed by the “A” button. You should either jump down or climb down depending on what you chose. I jumped down through the crack in the wall, however, it’s up to you to decide which you prefer. To go back to the top, you will be required to climb multiple ladders (Note: Ladders will not be displayed on the map).

After jumping or climbing down, search for an exit. This exit will lead to Kishimojin Temple and after passing through it, the exit icon will be displayed on the map. However, to go back to where you came from, you have to use the ladders that I mentioned before.

After finding Kishimojin Temple, you will meet with Hariti. She is the mother of Priyankara, the demon that you’re looking for to protect in this quest. Wu Kong should join the conversation and reveal information that Priyankara is being held prisoner. 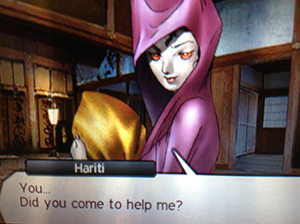 ( Screenshot: Meeting Hariti for the Sunset For A Demonnapper quest in Shin Megami Tensei IV )

Priyankara is located somewhere in Ikebukuro, according to Wu Kong. The thing is, Wu Kong did not say an exact location. Keep pushing on from Kishimojin Temple to discover new areas and you will eventually come across the the underground district of Ikebukuro. Find a stairs from Ikebukuro’s underground district and it will lead to ‘Ikebukuro Station – East Entrance’. Make a right turn and enter the first door that you find (not a relic door).

That’s where Priyankara is being held as a prisoner. Be sure to prepare for a battle. 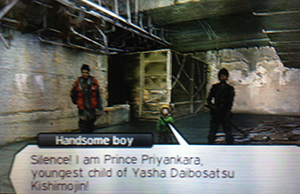 ( Screenshot: Finding Priyankara for the Sunset For A Demonnapper quest )

How to win the fight for Priyankara

After finding Priyankara, you must fight two men and their demon while protecting Priyankara to complete the quest. The men are both level 15 with the foul race, while their demon is Kanseiteikun, a level 31 famed race demon. 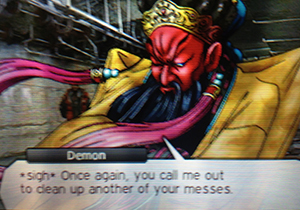 Reward for completing the Sunset For A Demonnapper quest = Antidote Ring.

Kanseiteikun blocked the dark instant kill skill I used against him during our battle, so it is recommended not to make the same mistake. I tried using physical, ice, fire, and force element skills on him, however, none of the above is his weakness. It’s best to use your strongest team against him. I used mine, and I kept using powerful skills.

After defeating Kanseiteikun, it will be possible to obtain him by fusing demons.