We already reviewed the first title, Tappingo (read the Tappingo review), and now having the chance to review its sequel, it brings up some questions: Is it better than the first game? Were the flaws fixed? Was it kept original? Yes, almost and yes. 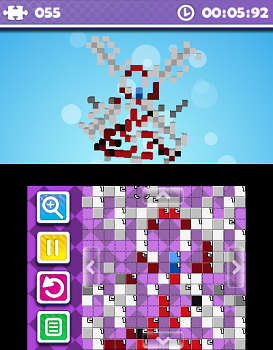 GAMEPLAY:
Tappingo 2 is a grid-based puzzle game for the Nintendo 3DS which you can consider an easier but original version of Picross.

Once you start a level, you will see different blocks with numbers and others that are just empty. When you tap a block with a number to any of the four directions, it will expand until it reaches another block or a border. In order to beat the level, each of those blocks need to be on an OK status which is possible after it expands many times. The empty blocks just can’t be used.

Like the previous entry, there is a total of 104 levels and all of them are available from the beginning, being larger and larger with the time. It’s hard to say an average time for each level, but the further you progress, the longer the levels are.

The controls of the game work well where you use the stylus on the tactile screen. If you wanted a different control setting, buttons are now compatible with this title, however, using the Circle Pad to move and the A button to perform actions can be slow but still a nice option for those who wanted a stylus-free option. The menus can only be used with tactile controls though.

One lacking feature is now present: you are able to zoom which is a great help for larger puzzles. The back feature is still missing in this game, so remember to be careful. Making a mistake when keeping a block back will make the blocked blocks keep growing, resulting in a terrible disaster. 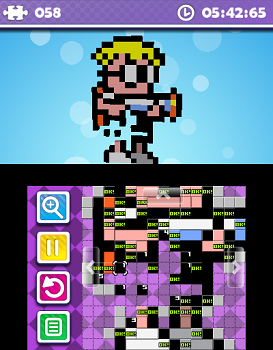 GRAPHICS AND SOUND:
There isn’t a lot to explain for its graphics – it looks really nice. This time the 3D effect has the ghost effect (mostly in the larger puzzles), so unless you play with the buttons, you may not care at all.

About the soundtrack, it keeps the same original feeling that the first entry had but this time there is a larger quantity of songs, presenting a great quality. Another thing to add is they are played randomly, therefore you won’t hear the same song over and over in the same puzzles.

PRESENTATION:
The presentation is great featuring a simple but well done manual, a few options, an easy interface, a good tutorial level, a good quantity of levels, and well, most of the flaws from the first game are fixed.

The only missing feature is the chance to share your high score, but it isn’t a “must have” element in this game.

CONCLUSION:
If there were flaws, they would have already been fixed. Tappingo 2 is an excellent puzzle entry for the 3DS eShop with a great quantity of content for its price tag. If you loved the first entry, you will definitely enjoy this one even more.