About a year or so from the date of this review, a new type of game came to iPhones and mobile devices. This game was titled Threes!, which quickly became popular. It soon managed to become the number one paid app on the US AppStore. If you’re not familiar with the game, Threes! was one of (if not the very first) the first sliding number games. You would slide matching numbers into each other to make higher numbers. You would add two 1 tiles together to make a 2, two 2 tiles together to make a 4, and so on until you got to very high numbers. This sort of game had no end; rather, it was a score attack. This genre of puzzle game became so popular that others started to make free clones of it. And we all know that if an addicting puzzle game is free, it’ll become popular. 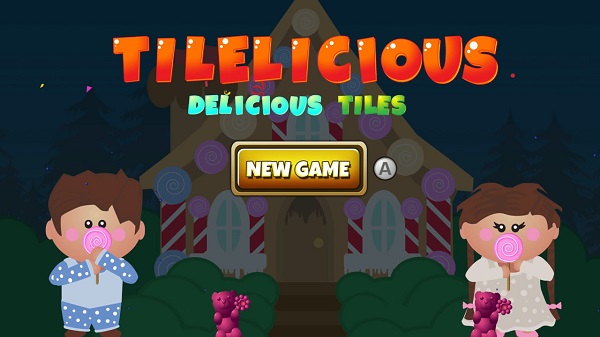 If you haven’t heard of Threes!, I’m sure you’ve heard of 2048 or the many other clones that Threes! brought to the AppStore. Shortly after Threes! arrived, the free clones started flooding in, just like any other popular game fad (I’m looking at you, Flappy Bird). As the free clones rained in, Threes! lost popularity, and soon faded from the spotlight, forever to be remembered only by those that actually bought the game and remember it as the original. The reason I’m telling you this very relevant story is because Tilelicious: Delicious Tiles is in fact one of these said clones. However, it tries to go a bit more in depth then just a mere score attack.

If you are at all familiar with the aforementioned games, then you know how to play Tilelicious. You must slide the images (themes somewhat vary with each level) with the corresponding image to make an image with a higher number (i.e. 1’s with 1’s and 2’s with 2’s). You must keep doing this until you reach the level’s end goal. At the beginning levels, you must make around an 8 and a 9. But in the later levels, you have to make outrageous numbers, like a 16 and a 17. This process never changes. Ever. Each level has the same concept; the only slight difference is that some levels have different image themes. One may be breakfast and one may be candy. 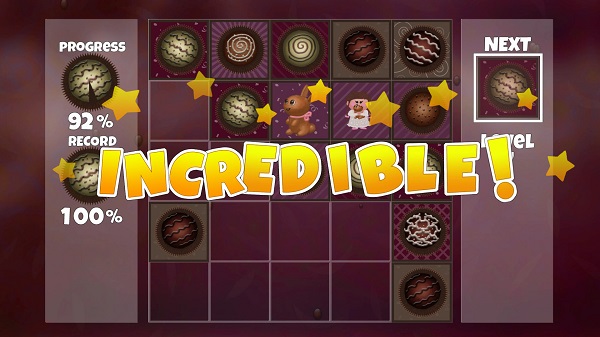 When you start the game up, you see a map. If you pay attention to it, you quickly realize there are only 9 level spots. My first reaction to this was “This’ll be a breeze. 9 levels in a game like this? I’ll beat it in an hour!” But after an hour of playing the game, I found myself only on the 4th level. Reason being is that the levels don’t actually get harder. Instead, the end goals just get increasingly longer. So instead of the first levels wanting you to match two number 9’s together or something of the sort, by level 4, they want you to get up to like 16’s or something. I can’t imagine what the later levels are like.

I also had no real motivation to continue playing time and time again, because even if you got really close, failure just meant that all your time was wasted and that you must waste it again for a chance to pass the bland, repetitive levels and go on to the next bland, repetitive levels. It might have been a bit better if there was some music playing in the background and something more than fake pieces of candy and very annoying match sounds, but there isn’t anything EXCEPT fake pieces of candy and very annoying match sounds. And when I say annoying match sounds, I don’t mean a unique sound. I mean a really loud BLOOP! sound every time you make a successful match. 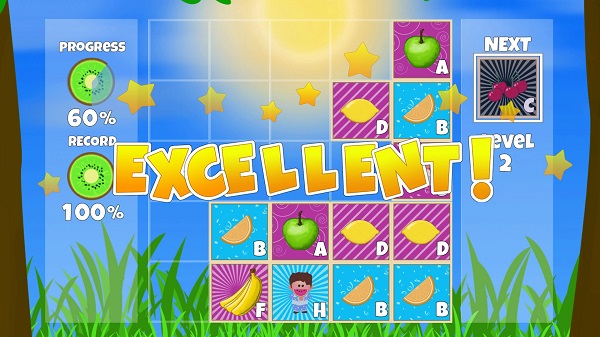 There was one thing that I wasn’t the least bit surprised at. Just from reading the title Tilelicious, and being familiar with the game Candy Crush Saga, I very much expected a guy with a deep voice to scream “Tilelicious!” at me when I was doing a good job. And, sure enough, it happened. If you do a good enough job and get some kind of combo going, a guy comes up and says “Mmmm…Tilelicious!” and I’m still deciding if he’s trying to be seductive or not. In some aspects, it’s just creepy, because this guy has a very deep voice. But it did make me laugh, and at least then I knew I was playing the game correctly. However, this also confirmed that the game has 0% originality. In Candy Crush Saga, if you get a huge combo or something of the sort, a guy says “Sugar Crush!” and I swear the voices sound the exact same, except for that the one in this game sounds just a tad deeper than the one in Candy Crush Saga.

I’m going to give Tilelicious: Delicious Tiles a 3/10. There’s no originality, there’s no change in gameplay, and there’s no music. Playing this type of game can get boring pretty fast, but even more so if you’re playing it to nothing. I even tried playing it to my own music and it just didn’t work (Maybe that’s why there isn’t any music; because they couldn’t find any song to fit the gameplay). This game is like a mixture of Threes! and Candy Crush Saga, and that sets it up to be my worst nightmare.