You must have heard the horror stories. A 1.7 metre tall model gets fired for being too fat – said model weights 54 kilograms. Humour columnist Nury Vittachi tells us that the head counts as a major organ in all species except supermodel. From this, one can gather that while it is certainly better to die in your boots than in a hospital bed, it’s preferable to die barefoot than in high heels. However, thanks to that malignant Barbie doll line (which makes Chucky from Child’s Play look relatively innocent), a whole generation of eight-year-old girls are dreaming of being supermodels as you read this. Top Model 3D is meant for such girls – and while if such a game had been designed for older gamers it would have went over as flat as a mu shu pancake, you should take into account that this game will probably only be played by three categories of people: Barbie-owning girls, poor reviewers who have to do it, and those whose mind might be slightly addled.

You stay in a loft in which there are only two people – your manager, whom you are encouraged to talk to often but doesn’t give any really helpful advice (not that it’s actually needed), and a fellow top model who looks so drawn and haggard from the strain of modelling that she was downright scary. A fruit bowl is present, and since models have to keep some energy (I believe they are still allowed to eat a little bit), you have to eat at least one of the three fruits before you leave for one of your four modelling activities: fashion (dressing-up), catwalk, makeup and photoshooting.

In Fashion, you are given a theme to work with (‘Sporty,’ ‘Elegant,’ etc.) and choose from dresses, shirts, pants and shoes to create the best combination. In make-up, the upper screen displays a photo and you have to use the touchscreen to apply makeup to the model’s face and bring her as close to the pre-set image as possible (I failed miserably at this). 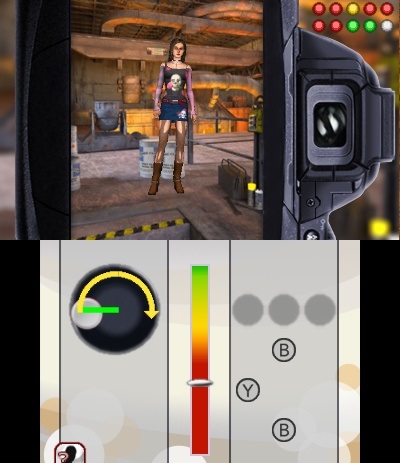 Catwalk and photoshooting are the more fun modes. In catwalk, your model walks down and up the runway while you press buttons and move the Circle Pad in the displayed patterns on the lower screen. The patterns repeat a lot and are easy to memorize, and a point came after only a few catwalks where I could press the buttons in the correct order, mostly, without even looking. The framerate is choppy, but the 3D effect is good.

Photoshooting is probably the most fun mode of the game – as fun as it could be for this poor reviewer, anyway. Like Catwalk, you have to press buttons and move the Circle Pad in the correct order for your model to strike poses, but the button-presses and Circle Pad order alternates every three inputs. The pre-rendered backgrounds and the somewhat better framerate made this mode better visually than Catwalk.

After five days of training in these three modes, you go to the judges, show them a brief catwalk, then answer five questions on the modelling and fashion business. The questions often repeat from week to week, and while I, with my little knowledge on the subject, left it mostly up to guesswork, I imagine the questions to be easy for anyone who was interested enough to buy this game at all. After your presentation to the judges, you are given a photo for your zed card, which showcases all your photoshooting sessions.

There’s a Free Game mode, which has the four gameplay modes playable without any trips to the loft in between, but there are no consequences to playing them and it feels tacked on. The game’s visuals are mostly pre-rendered, but the 3D objects’ framerate is still choppy except in photoshooting. The 3D objects don’t look very good, and the lack of customization in the game is disappointing. Even more of a letdown is the fact that after finishing the game, you start again from Week 1 and all your progress – which is to say those zed card photos, because that’s all you have to mark your modelling journey – is lost. The music is tinny and thankfully, not memorable at all. Even so, Top Model 3D is likely to mostly satisfy its intended audience for the most part – although I’d advise other people to stay far away from it (and if you are a reviewer, I sympathize). Photoshooting and catwalking were enjoyable enough, but the price is too high for a game that can be finished in a single afternoon.