Do you own Animal Crossing: New Leaf? Did you see a shark yet? If you did not, don’t worry – there are sharks. The game’s official trailer also showed one off if I recall correctly. They’re rarely seen in the game, sort of. Or, I should say that they are more difficult to find than a regular ol’ fish. If you really need to find a shark in Animal Crossing: New Leaf, keep reading.

Where To Find Sharks in Animal Crossing: New Leaf

Sharks normally lurk in the ocean during gameplay. To tell if a shark is in the water, you will notice a fin moving around, above the water. I’ve also seen a large fish with a shark-looking fin in the water, so there is no guarantee that the one you’re looking at will be a shark. You just have to catch it to find out. 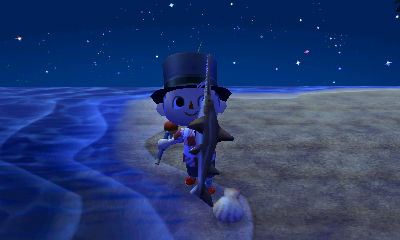 Below are locations (and times) where sharks are commonly found :

Night Time or Afternoon at the Sea

I tend to see more sharks during the afternoon (3DS Time) or at night. I’m not sure why, and I don’t know if it will be the same for your game, however, this is just something that I have noticed when playing Animal Crossing: New Leaf.

If you have already unlocked the Island, that’s good news. Every once in a while a shark appears – day or night. Keep making the rounds and you will eventually run into one.

There’s also a trick to find sharks faster on the Island. Run around the Island next to the ocean (make sure you have a good view at the water to find a shark fin) and as soon as you reach the house, enter. As soon as you enter, exit. Make another rounds around the Island and look for a shark. If you still have not discovered a fin in the water, enter the building again and exit. Keep at it until you find a shark.

I found about 10 sharks in less than 30 minutes after following the steps above. I’m not saying that I caught all. Heck, most of them got away. Some may not have even been sharks – a couple might have been large fishes with shark-looking fins.

If you visit a friend’s town, or they visit your town, go by the ocean and spend some time fishing. Sharks come out to play when two or more players come together over Wi-Fi (I’m not sure about local multiplayer gameplay yet since I have not tried it, however, it will most likely be the same). I’ve also confirmed this with a friend who owns the game and they told me that it’s also something that they have noticed.